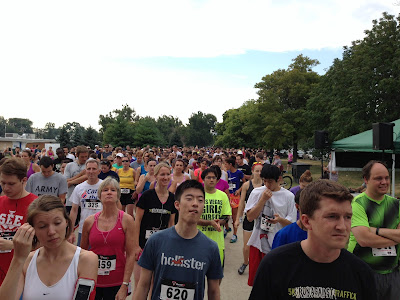 Last year my friend John ran (and recommended to me) the 5K Run Against Traffick. So Saturday morning I snagged a ride with him to Diversey Harbor and we ran this third annual race along with around 700 other participants (a record for them) - with about half registering through Groupon.

Basecamp was just northeast of the Peggy Notebaert Nature Museum, where many other races have set up shop and things were well-organized, with a personality from Moody Radio providing the pre-race (and finish line) announcements.

It was an open course without any water stations ("There are lots of water fountains along the Lakefront Trail," Laura Ng reminded runners before the race) but with plenty of volunteers along the course directing traffic. This extra support along the course was extremely welcome, due to the amount of runners (both participating and just out for a morning run), especially at the turnaround and near the finish line (this is one of those courses where you think you're heading towards the finish line, only to find out that there's a final turn where you loop back towards it). 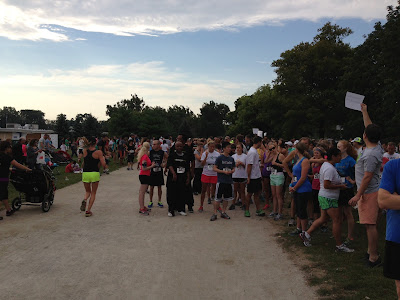 Overall, it was a well-organized (if minimal) run. But this event was more about raising awareness than about coordinating a race - many volunteers along the course were holding up signs with statistics, historical information and other data about human trafficking (particularly focusing on the Chicago area).

I finished with a 23:56 (the race did not have an official timer so that's just based on my watch) and John finished with a 24:04. As my first race back after physical therapy (and to finish without any pain) I was pretty happy with that time - especially since I still had the Firefly Run and the Hyundai Hope on Wheels 5K to go before the weekend was over. 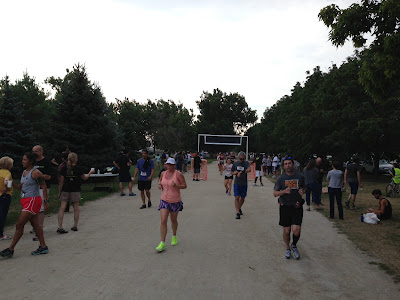 Side note about the goodie bag - race shirts (which were actually pretty stylish) were not included in the price of the run (though they were for sale for $20). Instead, each goodie bag included a little chain-link bracelet from Force4Compassion with a letter and a number attached (mine was B12). The letter represents the first initial of a victim of human trafficking and the number represents the age that they were first trafficked. These little bracelets are a sobering reminder of the realities (and horrors) of human trafficking and replaced a race shirt well. Still, grey cotton t-shirts from last year's race were given out afterwards to any participant who wanted one. For an additional $5, a brunch was also available after the race.

This race was well-run for a small charity race, but at around 700 participants they're pushing the limits of what a "small charity race" is. If organizers seek to expand participation even more by next year a new location might be necessary - and an officially timed run as well. Still, creativity in regards to the goodie bag and information along the course helped make this run more impactful than it might otherwise have been.