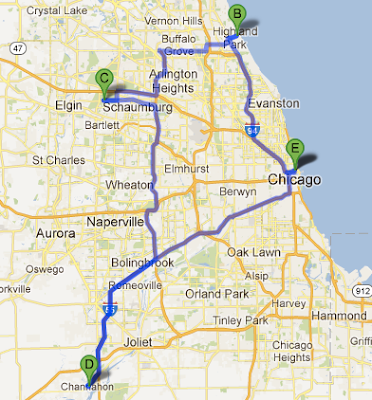 A few weeks ago I was looking through the race listings for the month of February and noticed that there are three different races this coming Sunday. All in different cities. As I was trying to decide which one to run I realized that they're all taking place at different times... and then I started thinking...

Why not just run all three?

I talked to my running homey Antonio and after some discussion about logistics, we realized that based on the timing and location of the races, this would be an insane dash from Chicago to Highland Park to Hoffman Estates to Channahon and back to Chicago, with just enough time to park, get our bibs, run the races and (after carefully stretching, of course) head off to the next one.

That's also when we noticed that by a pretty sweet coincidence, the three races just happen to add up to a half marathon.

So, obviously we decided that it had to be done. We registered for all three and created a new race:

So get ready Highland Park, Hoffman Estates and Channahon. You're about to be part of a new half marathon.