February 24, 2013
The several inches of snow that we got Thursday night (or early Friday morning, I guess) provided a perfect set-up for a trail race through the woods yesterday. You can read more about the Fox Valley Winter Challenge Trail Series Trail Race #2 (I swear that's what it's called) in my Newcity review.

Last year, I ran the inaugural version of this race (I say "version" only because it was a 5K last year and this year not only is it an 8K but the name is different and it's part of a three-race series) and had a surprisingly good time, given that I had no idea what to expect from a snowy trail race and that I still wasn't that familiar with outdoor running in the cold. Up until this point I had spent most of my winters in Chicago either running on a treadmill or just giving up running completely and waiting for spring to come around. This 5K was also one of the first races that I reviewed for Newcity (last year's review) which makes it an especially memorable race for me.

For 2013, this is the first "repeat" race that I've run, but given all the changes I mentioned above, I guess I can still safely say that I haven't repeated any races yet. Parts of the trail were the same but overall, aside from the starting stretch down a paved access road, I'd call this a completely new race. And it's still a good one. 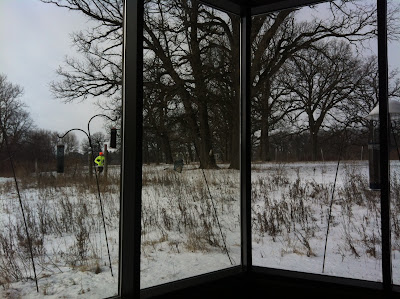 The Fox River Trail Runners were smart to incorporate this into a winter series that's spread out over the first three months of the year with increasing distances (January is a 5K, February an 8K and March a 10K). The downside to this is that there was no goodie bag for this race (despite the $40 price tag). I'm assuming this is because they're offering a pullover to runners who participate in all three races. However, given that you can sign up for each of the races individually, I'd still expect some kind of shirt (or even a super sweet hat like they gave out last year) to come with registration. Unfortunately, all that was included was the race bib. 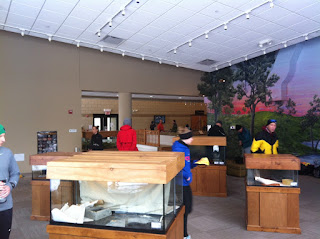 Part of the draw to drive all the way back out to St. Charles again for this race was that last year I ran with my friend Bill (who doesn't consider himself a runner) and he ended up killing me time-wise and taking first place in our age group. This year, even though he's now jumped up to the next age group, I wanted a rematch so when I saw that it was now an 8K I asked Bill if he'd be interested in tackling this one again and he accepted the challenge.

Before the race, while we were waiting in the Hickory Knolls Discovery Center (which is actually a pretty cool miniature nature museum with live snakes and a bunch of mammels that were taxidermified (my word) Bill unveiled his high-tech plan for keeping his feet from getting soaked in the frozen streams and snow on the course like they did last year: CVS bags. 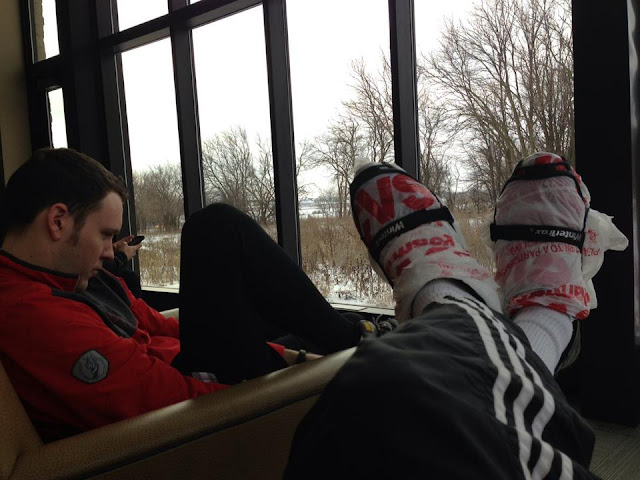 I would have supported this plan more if CVS would have sponsored him. There was actually a beta design but it just involved putting his foot inside the bag... and then he realized that if snow got in the bag too he'd be double-screwed. So the bags were just kind of wrapped around his shoe and then secured with the cleats. It worked out kind of well. Afterwards, one foot (not pictured) was fine, but the other one got all messed up: 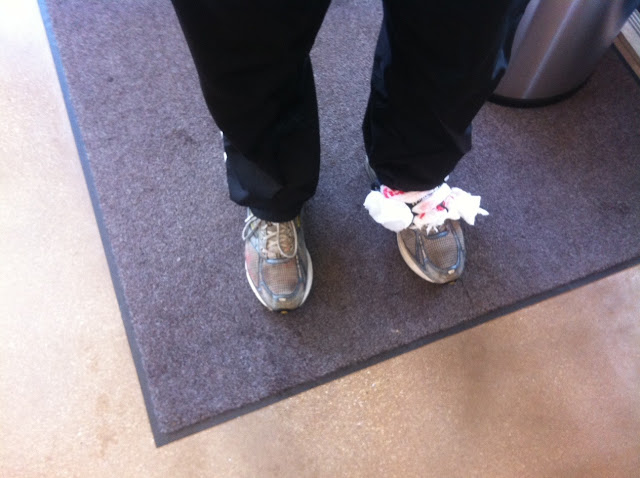 So maybe he needs to do a few more beta tests. I'll let you know when these fancy feet protectors are available. They'll only be available at Dominick's. 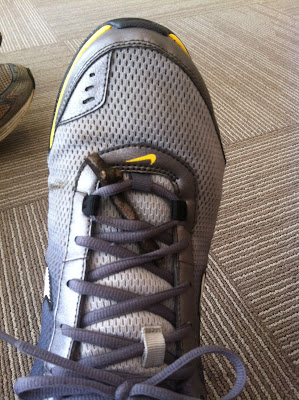 Anyway, I finished with a 45:24 (roughly - this was one of those races where they take your number from you at the end and write down your time with it) and Bill had a 48:07. Great success. And the trail was pretty amazing. All the freshly fallen snow was tough to run through but added an extra level of interestingness to the race. Especially when going uphill.

At one point I got a branch caught in my shoelaces and ran with it for a little while until I felt it come loose. I didn't realize until after the race was over and I was stretching that a piece of the branch was actually still lodged in my shoe. Apparently I bring the forest back with me when I run.

It was pretty disappointing that there was no awards ceremony (especially since I think this is probably going to be my last race in the 20-29 category, which means I won't be placing in any age groups for a while).

And just to give you an idea of the Hickory Knolls Discovery Center and the kind of displays they have in there, here's Frankie the snake (that really was his name - and I didn't find out because I speak parseltongue but because his case had a label on it). 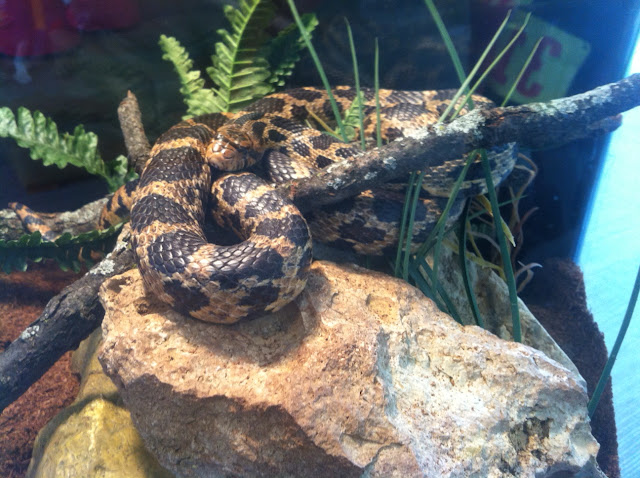 On the way back to Chicago we stopped at a pretty amazing restaurant called Seven Dwarfs. It's a Snow White-themed (yes, for real) Greek/Italian/Breakfast restaurant in Wheaton and if you ever drive through there you should probably stop and get a Country Fried Steak or a Pancake Sandwich, because they're both delicious. And also because there's a giant Snow White mural in the main dining area: 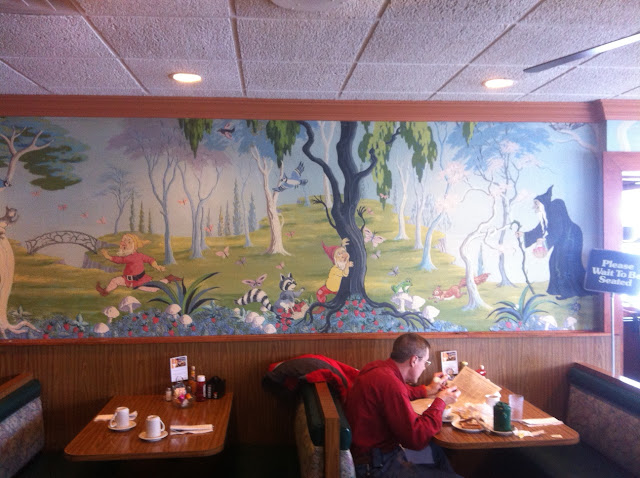