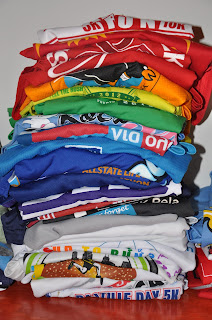 Remember when race shirts were pretty much guaranteed to be over-sized white cotton, seemingly designed so that you could wear them once (if you really wanted to show that you ran the race) and then probably never again? One side had the race logo and the other had about 20 sponsors. And the long-sleeve ones had little cuffs at the wrists to make sure you got that nice puffed sleeve look that no one has ever asked for.

These days it seems like almost every race is giving out running shirts rather than old-school cotton, and mostly I'm thankful for this change because it seems like they spend more time picking an appropriate color and working on a legitimate design rather than just slapping their logo onto some cotton for you (although I did get a few race shirts this year that went with that style... surprisingly enough, those shirts aren't in my closet anymore).

Anyway, pretty much every race includes a shirt. Some are awesome, some are terrible and some are just... shirts. But as I was grabbing a shirt to run in yesterday morning (and fighting to make sure the whole stack didn't topple over on me) I thought maybe I should highlight some of the shirts that I really liked from last year, since I did add quite a few to my closet this year. 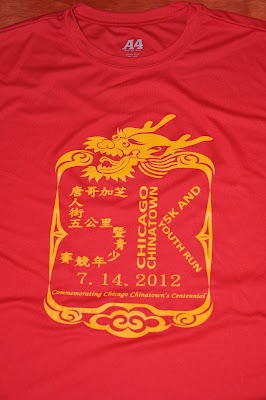 7. Chinatown 5K - this is a deep red shirt with a pretty straightforward little yellow design centered right in the middle. The thing I love about this design is the simplicity. There's not a lot going on but they got all the information in there and threw in a dragon-head for good measure. How many running shirts do you have with a dragon head? Also, even though I don't know what the symbols say that make up the number 5 I like that the "K" is constructed using the name of the race - it saves space on the shirt and also adds to the design. It's an A4 shirt, which a lot of races used this year. These shirts can be a little tight but they're also very light and moisture-wicking and all that. This material is perfect for a quick run on a hot day. The downside is that it's not necessarily great for a super long run because once you sweat in it it just stays wet. It's okay for a little bit but then I run out of dry spots on my shirt to wipe my face with. Anyway, this is one solid race shirt. 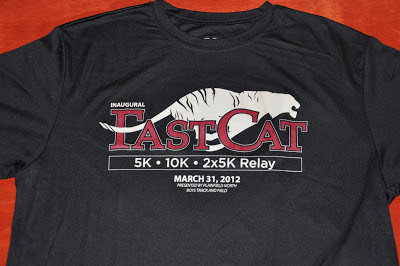 6. Plainfield Fast Cat - this is another A4 shirt, so everything I said above also applies to this shirt. But this design is a little more awesome. Let's be honest though, naming your race "Fast Cat" is already a really sweet choice, so this designer just had to make sure not to screw it up. And they definitely didn't. This designer deserves some props, especially since this was a small first-time race for a suburban track team. Throwing in the word "Inaugural" and listing the three distances were a nice touch and everything is perfectly balanced. AND THERE'S A FAST CAT IN THE MIDDLE OF THE DESIGN! This is the only black race shirt I got all year, which is actually surprising because it's a great color for a workout shirt. Admittedly, it's not so great on super sunny days, but whatever. 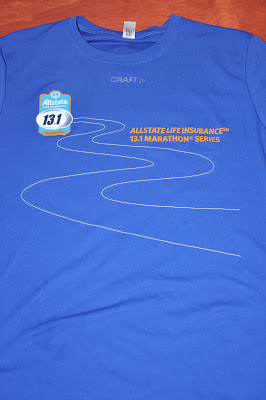 5. Allstate 13.1 Chicago Half Marathon - I'll admit that I'm partial to the color blue, which is probably why this shirt made it so high on my list. There's nothing fancy going on here and it even features a big "Allstate" logo on it, but this may be the shirt I've worn the most since getting it. This is a Craft shirt, which means the material is a little better in terms of breathability and moisture evaporation. It's also quite a bit softer and slightly thicker than the A4 shirts. The design is dynamic and eye-catching without being overly complicated or flashy. Is that a river? Is it a road? Some swerving tire-tracks to remind you to get car insurance? I don't know, but I like it. And I like the dark blue shirt color with the orange lettering. This shirt is functional and stylish at the same time. 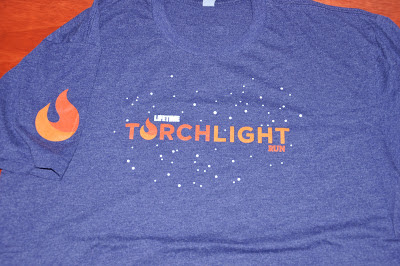 4. Lifetime Torchlight Run - this one isn't a running shirt. It's a super-soft cotton/polyester blend from Next Level Apparel. The purplish blue color is a slightly different shade than any other shirts I have and the orangey flame lettering really stands out nicely on that background, especially with the starry looking white dots sprinkled around the logo for good measure. There's a big flame on the right sleeve for added effect. There's no year or distance or anything which makes it a little mysterious but it's a comfortable, well-made, well designed shirt that manages to look stylish as well. 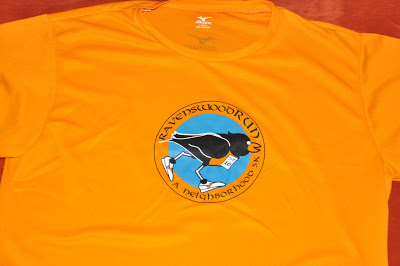 3. Ravenswood Run - I like shirts that have a unique color and I definitely haven't seen this color in any other shirts this year. But the bright orange color and little running raven logo are the icing on the cake for this high quality material and shirt design (it's a Mizuno shirt). This one really feels like a shirt that you would purchase that just happens to have a race logo on it for some reason. It's actually nice enough that sometimes I don't even want to wear it because I don't want to "ruin" it. Stupid? Yes. I know. 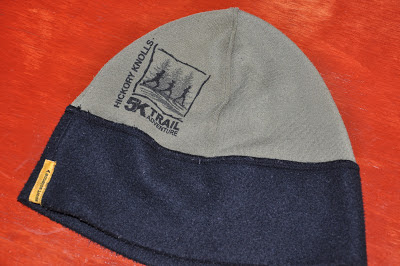 2. Hickory Knolls 5K Trail Adventure - I told you there was a hat on this list. This thing is awesome. It looked way better when I first got it but I've worn it on so many races and training runs that it's a little worn out. It may just be a fleece cap with the race logo on it but it's a little more exciting than a shirt and has come in a lot more handy. The color scheme is unpretentious and earthy (like a trail run, right?) and it fits so that it just perfectly covers my ears. I wouldn't be sad if more races started offering hats like this instead of shirts. 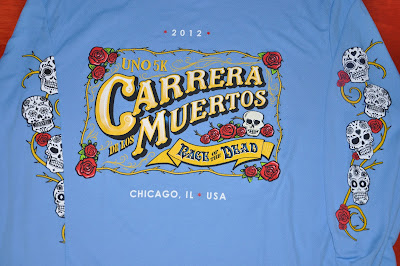 1. Carrera de los Muertos - look at that. Yes, I know what you're thinking: this shirt is crazy sweet. Unlike the other designs which succeeded by being minimalist and subtle, this one is all up in your face with colors and letters and roses and skulls. Most of all skulls. Those skulls are really the selling point here. Especially the ones down the sleeves. While I do love the main logo on the front, it's the sleeve skulls that make this one Number one. Skulls growing on rose vines? Sounds like a good idea. And the light blue background gives it a softer feel than you'd expect from a shirt covered in skulls. Granted the Day of the Dead theme is a great one to be working with, but this design easily could have flopped. And adding extra designs on the sleeves just because? That's going the extra mile.

So there's my Top 7 Shirts from 2012. There are a few others that I wear a lot but that didn't make the list, so I'll say they get runner-up status: 5K for Earth Day, Proud to Run and Soldier Field 10 Miler.