The Five Coolest Things About the New Nike Running Bucktown

October 04, 2013
Until only a few years ago - and maybe even until last year - I didn't consider Nike a "running" brand. I knew that they had running stuff and that I could get all the running gear I needed at a Nike store, but it seemed like a weird decision to go shopping at a "sports" store when there are so many great "running" stores tailored specifically for runners. But over the last few years Nike has been working towards repositioning themselves within the running market, and it seems to be paying off.

Tomorrow morning (October 5th, 2013) Nike will open its 1st Nike Running store in Chicago (and 8th in the US) at 1640 North Damen in Bucktown. Keep in mind that a Nike Running store is different from a Nike store because, as the title suggests, it's just about running. Last night I had a chance to preview the store and check it out before their official opening this weekend. And I have to say I'm pretty impressed. I know, I know, the point of a store preview is to be impressive. It's very guided and careful (and the food and drinks don't hurt). But still, I think this store is going to be genuinely cool for the runners in Bucktown (and even other areas of Chicago if they're willing to make the haul to get there).

Now, Nike is a big corporate entity. And they're opening in Bucktown. So they're attempting to bring as much "local" flavor to this store as they can while still maintaining the global Nike brand that runners already know about and want to be engaged with. Not an easy thing to do. But they have people who work hard on this. And it looks like they're pulling it off.

Anyway, let me just give a quick breakdown of five things that I saw last night that are pretty exciting. And forgive me if I sound like a Nike shill - I promise I'm not. I usually wear Mizunos if that makes you feel any better about this.


1. Stapling race bibs to the ceiling! So, right now (since the store hasn't opened yet) they have a pretty lame selection of bibs here but the idea is that after a race, runners can bring their bibs into the store and staple them to the ceiling. This not only a sweet way to make the store unique but it also provides runners with a way to make a store feel like "their" store (and gives them a way to get rid of all those race bibs without just throwing them away... I write my time on the back of mine and keep them in a file... I know, I have a problem). Whoever came up with this one is brilliant. Looking at the exposed wood of the ceiling with old running bibs stapled to it how could you not feel like you're in your own local running store? 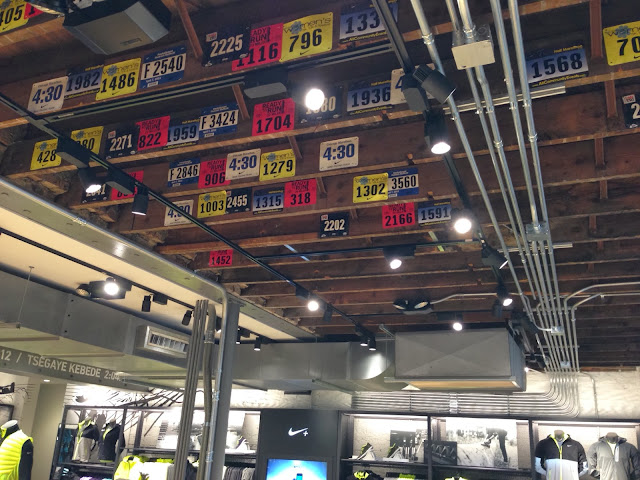 2. Nike+ FuelBand station! If you don't own a Nike+ FuelBand this doesn't apply to you, but I do and I'm kind of obsessed with it (even though I pretend not to be). This station allows you to plug your FuelBand in and charge it at the store but, more importantly, when you plug it in it brings up your Nike Fuel account so that you can look over your stats on a big TV in the middle of a running store. Doing this on your own might not sound that cool, but last night I had the chance to plug in my FuelBand and look at my stats with two of my Nike+ friends standing nearby. Being able to log into my account and compare stats with them while walking through a running store was pretty exciting (even though I had an embarrassingly low amount of fuel for the day). Also I got my FuelBand charged. Bonus. 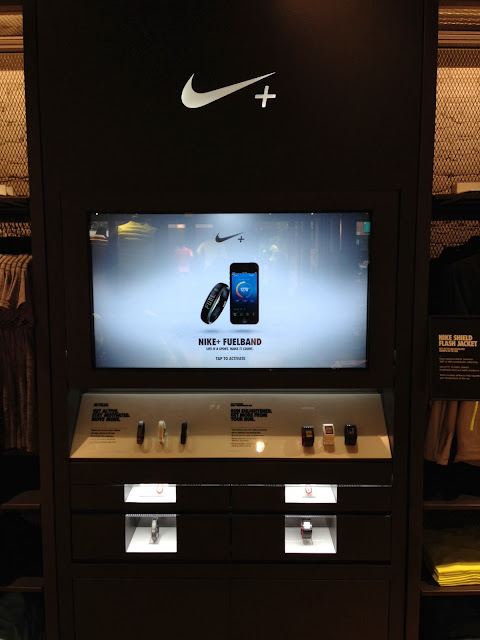 3. Community lockers! You can tell by the good lighting and composition of this photo that I didn't take it. This view is to your right when you first walk in the door. First off, check out the Chicago Marathon swag right up front. They unveiled a new Lunar Glide 5 specifically designed for the Chicago Marathon and... oh man... I'm not even really a shoe person but this thing is sweet. I want it so bad and I'm not even running the marathon this year. But I digress. In the middle back below the shoe display you can see a row of lockers. These are meant for neighborhood runners to be able to come into the store and lock their stuff up before going for a run. I think they could use a good deal MORE of these but I like the concept and they look cool. 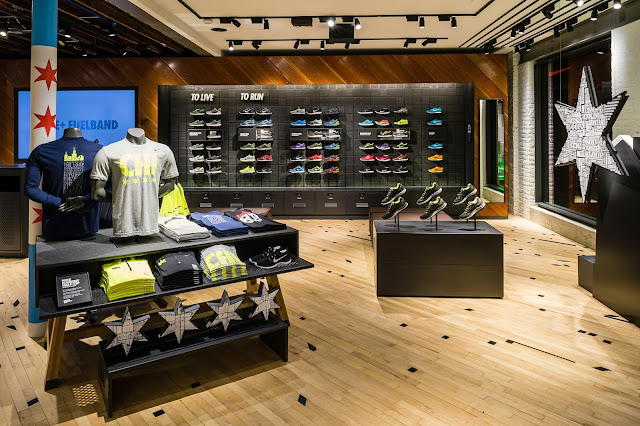 4. Local art! Last night they officially unveiled this giant mural by Chicago artist Hebru Brantley. It was a very legit reveal, with Brantley being interviewed inside the store beforehand and then all of us going outside to start a countdown and watch this black curtain drop to unveil the artwork. I took one picture right before it was unveiled and one right after but if you want a better look at it (with the street signs removed and everything) check out the bottom of this blog. Again with the local vibe - Nike knows how to roll. They hired a well-regarded local artist to do some very hip wall art. And it looks good. Some artists may say there's no such thing but this strikes me as the perfect mix of legit street art and commissioned/co-opted street art. It's eye-catching and memorable and completely unique. 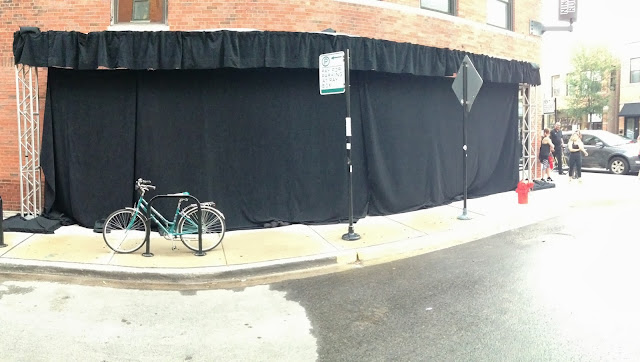 5. Tweet screen! Once again, this is clearly not a photo I took. This one gives you a view of the full store head-on. Off to the right you can see a giant flat screen. This wasn't set up last night but the plan here is to implement a giant tweet screen (hashtag pending) so that when you're walking through the store you can see tweets from various runners in the community as well as runners that Nike Running Bucktown follows. Pretty cool way for runners and community members to interact and another way to make the store itself a hub for runners and just a place to go in the neighborhood (whether you're planning to buy anything or not).

So that's my list of five things I was especially struck by last night at the Nike Running Bucktown preview. There's a lot more cool stuff there - I didn't even get into the new gear - but I'd be interested to hear what other people notice once they check the store out themselves (there was a run tonight  and an opening celebration tomorrow morning with DJ, bands and, necessity of all necessities at any hip opening these days: a food truck).

So you should check out the great photo of the Hebru Brantley mural at the bottom of this blog but first check out these reflective jackets. 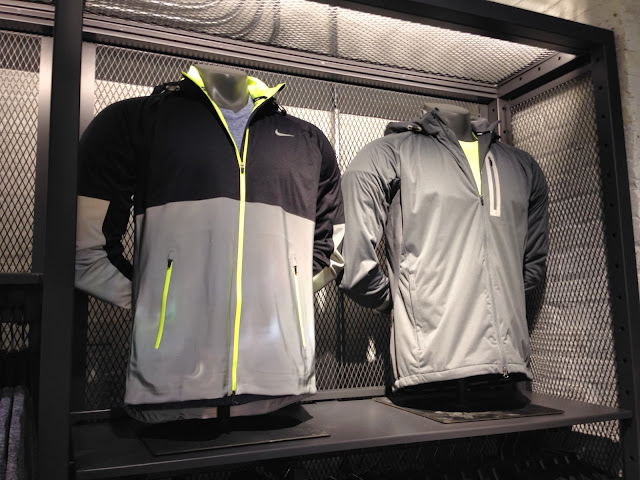 And here's what they look like with the flash (YESSSSSS): 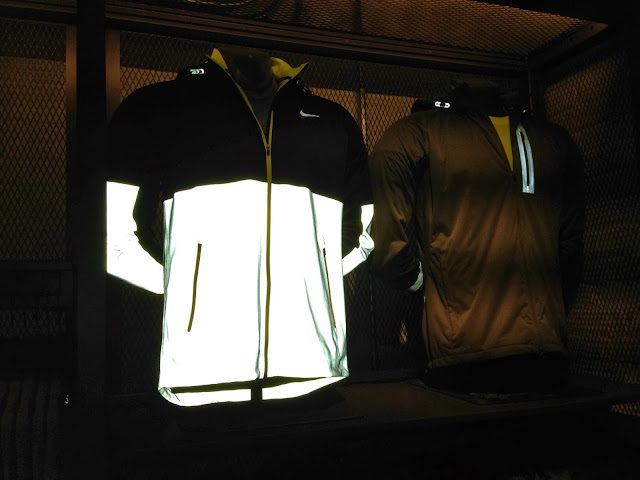 Here's the much better photo of the Hebru Brantley mural you've been waiting for: 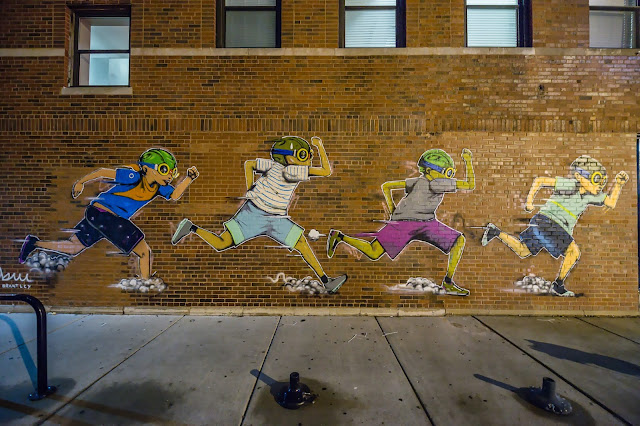