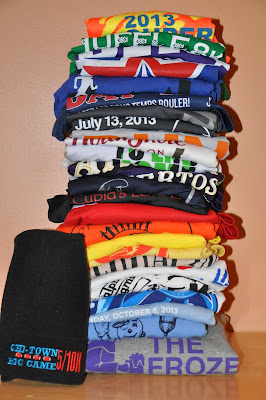 Every year Chicago adds a few more races to the running roster. In 2013 I ran 37 of them. And though I did repeat a few of the same races that I ran in 2012 I tried to find new ones as well, occasionally even making it outside of the city for those - I KNOW, what an explorer right?

For 2012 I did a Top 7 Race Shirt post so I thought I'd do it again this year. It was actually harder this year to find seven shirts that I liked out of the 37. There were a lot more cotton shirts this year (both long and short sleeve), which could be because I ran eight less races than last year but could also just be a reflection of the races I chose to run (smaller, newer races). Probably it's a combination of the two. Either way, the trend towards athletic shirts that I noticed last year still seems to be holding true, but there is a bigger-than-you'd-expect contingent that is still holding out with the cotton (including one sweatshirt from the Muddy Monk Frozen Five).

To me the key to a good race shirt is:
1. Simplicity
2. Uniqueness of Design
A unique color doesn't hurt but simplicity and uniqueness of design go a long way towards making a shirt re-wearable. A good race name can also seal the deal (assuming the designer follows the above two rules).
Anyway, let's take a look at the best race shirts from 2013. 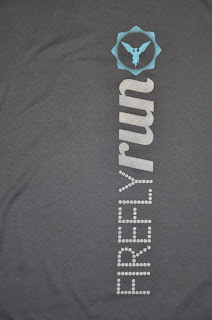 7. Firefly Run - This shirt is the plainest of the bunch - which is odd because I think this one is probably the shirt from the biggest race on this list. But it's a simple dark grey running shirt from Greenlayer, very breathable and absorbent and all that. The design is really simple and there are no sponsor logos or anything else anywhere on the shirt. It's a plain grey short-sleeve with this logo running sideways up the front on the right side. While I didn't particularly enjoy this race (the glow in the dark stuff was cool but the course was poorly lit and too crowded) I thought the shirt was really well done. In keeping with the theme of the race, the design is reflective as well. 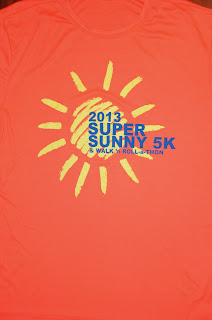 6. Super Sunny 5K & Walk 'n Roll-a-Thon - This shirt is one of the craziest I have ever gotten. Not because the design is outlandish or the race name is weird but because it is so bright neon orange that it attacks the eyes of all those around you. You are always easy to spot when wearing this shirt (except of course on race day for the Super Sunny 5K when everyone was wearing this shirt). The giant yellow sun adds to the brightness. It's a Sport-Tek and is a bit less breathable than other running shirts; this is one of those that once you sweat in it the shirt just stays wet and you end up with a soaking wet shirt. If it wasn't this type of material it would be rated higher on the list. I also like it because the race was a first annual in Burbank and not heavily attended so there aren't too many of these out there. That's right, I'm a hipster runner: "Oh, you've never seen the super-rare Super Sunny 5K shirt? Well, here's mine. NBD." I don't know how they'll top this shirt for next year. 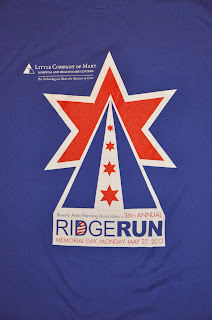 5. Ridge Run - This race has been going on for thirty-six years (2014 will be the thirty-seventh year) so it's not a young start-up like #6, but they have a cool way of getting their shirt design: they do a t-shirt design contest and choose their shirt design from the submissions. This design is patriotic towards the USA and Chicago alike (the race is on Memorial Day), with the Chicago flag serving as the road into a giant red star (and a little American flag in the D of Ridge Run). As I said last year, I'm partial to blue so that could be part of the draw for this shirt but I think this design really stands out and captures the essence of the race without going over the top. It's a properly moisture-wicking eXpert shirt and the only complaint I have about it is that the logo parts (the red and white) are painted on which means that those parts don't allow for sweat absorption - still this is a really nice looking shirt and obviously a t-shirt design contest pays off. 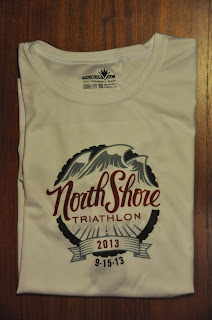 4. North Shore Triathlon - I'm open to the possibility that this shirt might be on this list simply because it's the shirt for my first triathlon (and also because it doesn't specify that it was only a sprint). Unlike the other racing shirt brands on this list this one is made by a triathlon-specific company (SweatVac). I don't know if that's why it's a bit softer and more comfortable than the others or if that's just because it's higher quality but this is probably the most comfortable shirt on the list. Also, the design on the front evokes both waves AND mountains, which both imply outdoorsiness and make me feel like getting out and doing something. Also white shirts are excellent for running in the summer but can sometimes look a bit bland - this one manages to be both simple and stylish at the same time. This was the first year for the North Shore Triathlon and while I don't know if I'll be up for making a second go at this race, it might be worth it for the 2014 shirt. 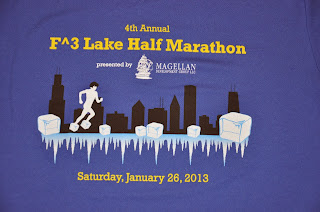 3. F^3 Lake Half Marathon - Some shirts are great by design alone, but some have a little help from the circumstances surrounding the race. I think choosing to run a half marathon in Chicago in January is a decision that anyone should feel ashamed proud of. The ice blocks on this guy's feet are exactly the way I want to remember that half along the lakefront. And the clearly displayed date lets everyone else know that you're hardcore (or just stupid) when wearing it. Like #5 this is also a moisture-wicking eXpert shirt (and an identical shade of blue). I can't help it - it's a nice color. 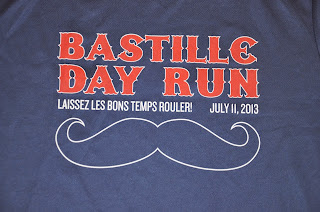 2. Bastille Day Run - This is another race that I didn't particularly love but the shirt design is outstanding. In 2012 the shirt was an unexciting plain white one but this dark blue number sporting a giant mustache (a giant FRENCH mustache I guess) is one of my favorites. Without the mustache it's just a plain racing shirt (still a nice color) but the mustache adds so much character. Also, like #7, it's a Greenlayer shirt and very wearable. I think this shirt should do a good job luring in runners for next year's race. 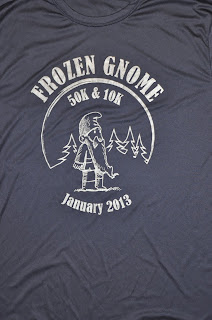 1. Frozen Gnome - So remember how I said sometimes good design can carry the day? Well, while this designer did an excellent job he or she also had a pretty amazing race title to work with. So, despite the fact this is a Sport-Tek (which I complained about in #6) this shirt easily wins the year.
1. The race is the FROZEN GNOME 50K & 10K. That title alone is worth advertising any time you get the chance.
2. Even though I only ran the 10K I have a shirt that says "50K & 10K." Which one did I run? You'll just have to guess.
3.That gnome looks exactly like I imagine a gnome would look if you told him that he was required to run either a 10K or a 50K on any given weekend in January outside of Chicago.
4. There are no sponsors on the back. It just says "M.U.D.D. McHenry (County) Ultrarunning Dudes & Dudettes." I like that.

I have worn this shirt more than any other shirt in my closet this year (and I think that trend will continue as long as this cold weather holds up). Unfortunately I'm out of town for the 2014 running of this race, but I'd encourage you to check it out!

So there's the Best 7 Chicago Race Shirts of 2013. There are a few runner-ups that almost made it, listed in no particular order: Terrapin 5K (t-shirt), Rudolph Ramble (hat), Frosty 5K (hat).

Here's to a 2014 filled with really sweet racing gear!