Yesterday morning I gathered with several hundred other runners at the Field Museum for a "spontaneous" run along the lakefront with comedy superstar (seriously, he just sold out the United Center for three shows) Kevin Hart after he tweeted this on Wednesday afternoon:

It may have only been a day and a half notice, but I say "spontaneous" because Nike+ Run Club had this event decked out like it was planned months in advance (wagering a guess that they had). This also proves Hart's stardom in that an organization like Nike would invest the time and money in prepping to host (the event included gear check, a race shirt, a post-race towel, water, food and dozens of volunteers, pacers and coaches) a free event that would only get around 36 hours of promotion. But the effort certainly paid off in turnout.

Around 1700 people registered (with around half of those showing up to the starting line, a Nike rep told me afterwards). That was enough to not only be the biggest Run With Hart so far, but also the biggest Nike+ Run Club run yet. Below you can see the swarm of runners at the starting line - many sporting the Run With Hart Nike shirts that were given out when you checked in. 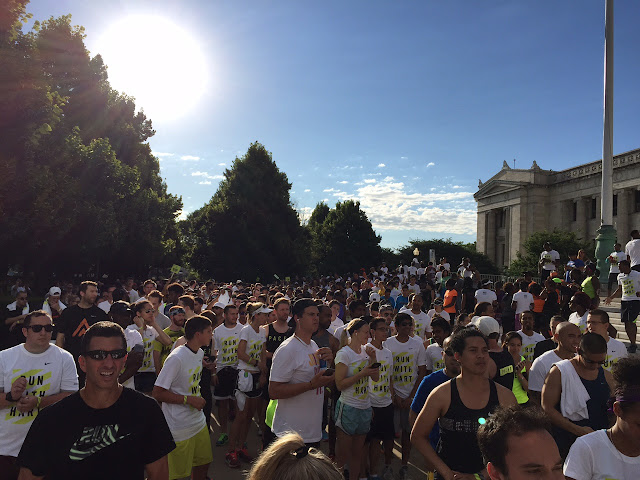 There were pacers with pace group signs so I jumped in the 7:30 group and found out afterwards, from Hart's tweet:


that he finished just in front of me! I saw him collapsed on the stairs when I finished but didn't know he'd just gotten there.

Now, Hart is a performer and he has an image to uphold ("My name is Kevin Hart and I WORK HARD!!! That pretty much sums me up!!! Everybody Wants To Be Famous But Nobody Wants To Do The Work" reads his Twitter summary) so collapsing after running could be a bit staged, but I don't think so. Running til you collapse is not cool looking. And if he could run a 21:54 and collapse, he could have run a very respectable 23:00 and came in looking smooth (for the record I ran a 22:40, and I'm sure I looked super smooth...). So it seemed to me that he was really living out his message of working hard. But I'm fairly gullible and anyone promoting running is already on my good side.

"I'm not a runner. In no way shape or form am I trying to be a runner," Hart said after finishing. "I'm just trying to get healthy people. Be a part of my goddamn journey. Get healthy with me." At least I think he said goddamn. Here's Luis Gomez' full video below with this quote:


"I love to do things on the fly, you know, have the spontaneous movement. So, the whole purpose for me doing things like this is for me to motivate people, get people up, get them out of their ordinary schedule and get them doing things they don't usually do," Hart said in another interview.

Pretty sweet for a guy in town to make us laugh to also make us work.