September 29, 2012
Last weekend Brynn and I flew to California for my cousin's wedding. The wedding was in Santa Rosa so on Friday night we flew into San Francisco to stay with one of my other cousins. On Saturday morning we woke up early for an eight mile run before heading up to Santa Rosa (which is about an hour outside of San Fran). My cousin lives in Chinatown and though we knew it was hilly we were under the silly impression that we would run down to the waterfront trail and then just continue running.

Almost immediately after leaving her apartment and starting to run we realized that our Chicago legs were not up to the task and we were going to need to walk the hills. I'd never been to San Francisco before, so even though I obviously knew that it was famous for its hills, I still didn't realize just how hilly those hills are.

So we walked to the end of Hyde Street and got on a running/biking trail there and just started running.

I was using RunKeeper on my iPhone to track the run because we hadn't really mapped anything out - we just knew we wanted to run eight miles for training.

As we started running we could see the Golden Gate Bridge in the distance, though we weren't sure how far away it actually was. It seemed close enough that we could reach it during an eight mile run but we didn't know for sure. 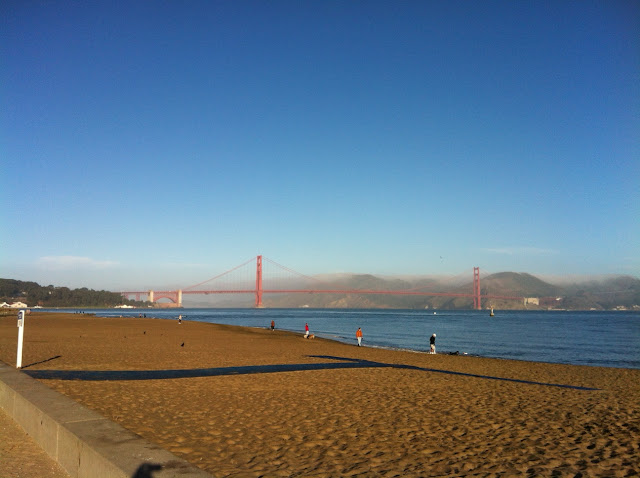 But near the end of the first mile we saw a sign that said "Golden Gate Bridge 2.9 miles" and decided to just follow that running path (which happened to be the path we were on anyway). Having a really sweet destination like this to run to made the run even better, since as we were running along the beach the bridge just kept getting closer... 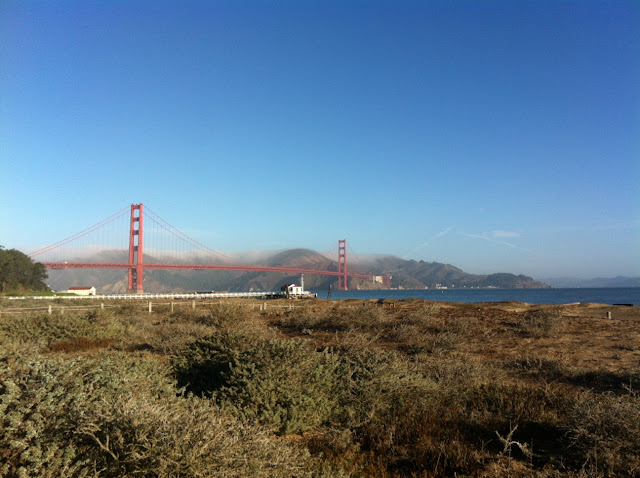 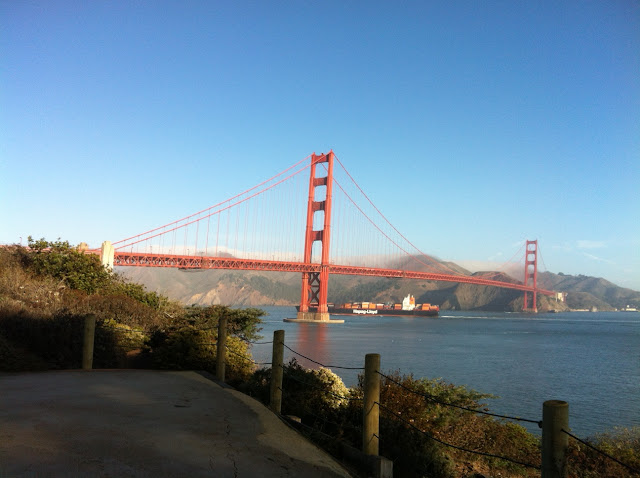 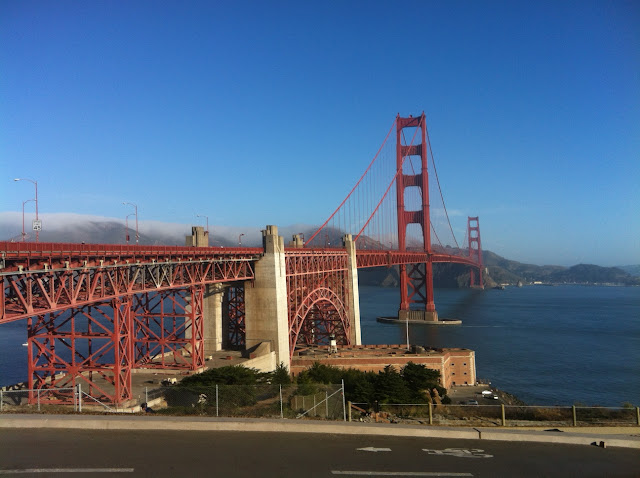 At the end we had to hike up some stairs and make a few more turns before we reached the final trail. This part of the trail was really nice because it was split into two trails: a two-way trail for bikes and a wider trail for runners/walkers/hikers.

The bridge itself has a pretty wide walkway, though there weren't that many people on it this early in the morning (around 8 or so). We tried taking pictures of ourselves but they turned out pretty bad. Luckily a family walked up and took our picture:
As you can see I'm wearing the GoPro Hero2 camera for this run (which means I have footage of my hand handing my phone to a guy and then him and his family standing against the other side of the bridge taking a picture, which is funny to watch). Overdocumentation? Perhaps.

Anyway, we didn't cross the bridge on Friday, but turned around right at the start and ended up doing a total of 10 miles (if you count the walking - which you really shouldn't, but I want to because it sounds better than eight) before showering and heading to the wedding, which was awesome. It was good to see a lot of my family that I hadn't seen in a long time and my aunt and uncle were able to host the whole wedding ceremony and reception in their backyard, where everyone could camp out after the party ended (or, more specifically, was shut down by a visit from the Santa Rosa police - that means it was a good wedding right?!).

We didn't run on Sunday but went on a cool hike in Santa Rosa. Because of our flight schedule (and because we needed a ride back to San Fransisco) we rode with my parents back in early Monday morning and then set out running again (this time we had a goal of 18 miles).

We started in Chinatown this time, running down Broadway til we reached The Embarcadero, which we followed past all the piers (including stopping to check out the sea lions at Pier 39). I didn't bring my phone this time so we didn't get any pictures, but it was a much more lengthy, scenic and touristy run. We ran past through Fisherman's Wharf and all the way across the Golden Gate Bridge to Vista Point and spent a little time taking in the view of San Francisco from the other side of the bridge. We tried to take a side trail that went along some cliffs past the bridge, but after about 0.2 miles it had a rope over it that said it was closed due to dangerous conditions. Lame.

Even though we felt pretty much dead by the time we finished, when we mapped it out later it was only about 16.3 miles... so we once again fell short of our training goal. Oh well, this weekend we're in Chicago and we only have to run 8 today and 13 tomorrow so we should be okay. 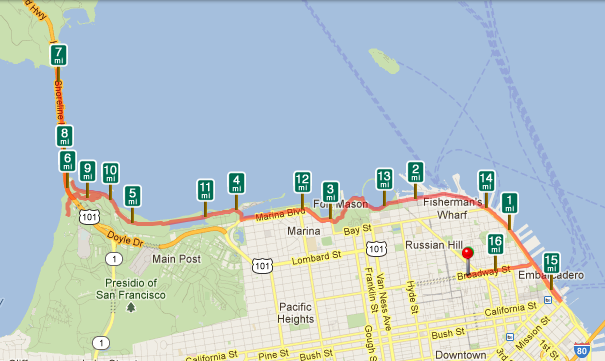 With our traveling the last two weekends, our marathon training has gotten a little off-track. We've skipped a number of our shorter runs during the week and ended up a little short on our last two long runs. We still have almost six weeks til Athens, but we're going to have to stay on track to make sure we can survive the hills there, since our last two experiences with hills have just left us thinking we've run farther than we really have... and I don't think you get a medal for telling marathon coordinators that you FEEL like you've run 26.2.