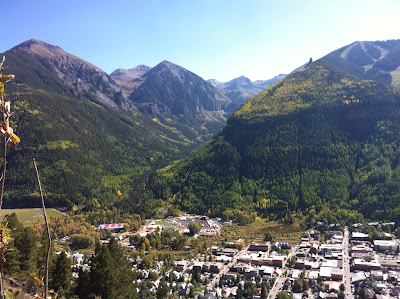 This past weekend Brynn and I headed to Colorado for the third year in a row to hit up the Telluride Blues and Brews Festival. If you haven't heard of it, it's a pretty amazing festival - mainly because the town of Telluride itself is pretty amazing - but also because it's a relatively small music festival that manages to get relatively big bands. Last year we saw Flaming Lips, Willie Nelson and Fitz and the Tantrums. The year before that it was George Thorogood and BB King. This year wasn't a stellar lineup (to me) so we just bought one day tickets for Saturday instead of buying the whole 3-day pass like we've done before. The other part of the festival's title (the brews, that is) is also a big reason we bought Saturday tickets: on Saturday every year there's a three hour window where around 50 microbreweries give out samples of their beers. When you walk in you get a little tasting glass... and then you just walk around tasting as many beers as possible. It's awesome.

But we weren't just there to listen to music and drink beer (though we definitely did those things). We also had to stay on top of our marathon training schedule to be ready for Athens in November. So when we got to Telluride Friday afternoon we decided to go for a 17 mile run. Since we were already at an elevation around 8750 feet (to put that in perspective, Chicago is at an elevation of around 580 feet) we wanted to run the flattest trail possible (which can be a little difficult anywhere in Colorado, but especially in a mountain valley). Luckily, I had found myself in a similar situation last year and the year before (needing to do long training runs for marathons while at this festival) so I had a good idea for a trail that was relatively flat.

We've run in a lot of different places, but this year we've pretty much run solely in Chicago, which - as you probably know if you're reading this - is (for the most part) very flat and very paved. So, as any runner who has trained in Chicago knows, it can be a little difficult to acclimate to other locations when running (especially when hills and altitude are involved). But we actually felt pretty good throughout this run. That could also be because we were running MUCH slower than our normal pace, but I'll submit the argument that there was so much beautiful scenery to look at that it was worth slowing down for.


As you can see from the (roughly sketched) map below, we followed a trail along a stream for the first 4 miles, then along the highway leading into town for the second four, until we were back in town. Then we turned around and headed back the way we came.

By the time we were finishing it was starting to get a little chilly because the sun had settled behind the mountains. But overall it was a great run - we passed very few other people, mostly bikers or hikers (only one runner) and just got to enjoy the views of the mountains, the trees changing colors and each other running. Unfortunately, according to the above map that Brynn did later on Runkeeper... we only ran 14 miles. So, not only were we slow, but we were 3 miles short of what we were intending to run. I like to think that the bottom half of the map (miles 1-4 and 10-14) are a lot less straight than we have them here... so hopefully we ran at least 15. 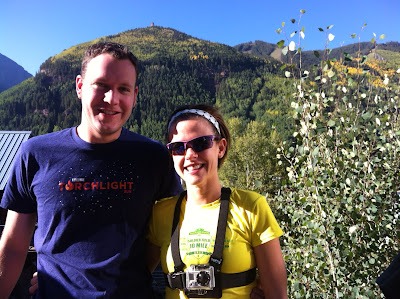 After the long run on Friday we spent Saturday enjoying the beer tasting and the music (Gov't Mule was the headliner... not too bad). And then on Sunday we went out to run an 8 mile run (at least Brynn did - I settled for about 4.5). We recently bought the GoPro Hero 2

and a chest harness

with plans to use it during the Men's Health Urbanathlon (and of course, Athens). We tried it out a few times with me wearing it last week on the lakefront trail but the result was a little shaky. So this time we had Brynn wear it... unfortunately we set it to take pictures instead of video so when she finished her 8 mile run on some incredibly scenic hiking trails she had two jpegs saved in the camera instead of a short running film. So we'll have to try that again.

This weekend we'll be in Santa Rosa, California for a wedding... and also an 18-mile run. Hopefully this time we'll get the camera working properly.

In closing, this is from the top of a hike we did on Sunday afternoon. I think it pretty well sums up how Telluride makes you feel: 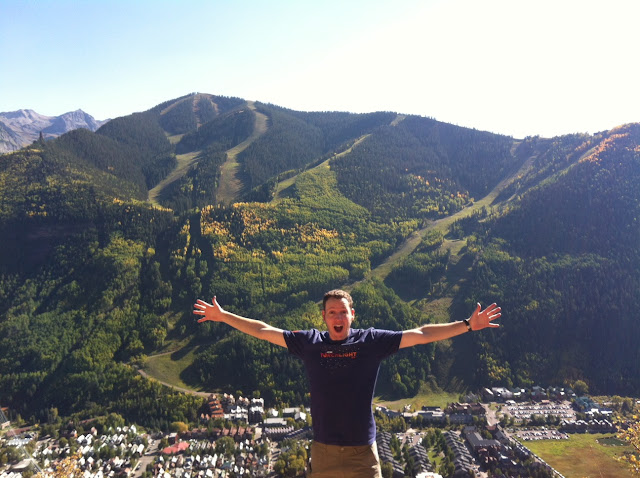