Running (all over) New York City

October 09, 2012
For the third time in a month, Brynn and I were out of town again this past weekend. This time, while everyone was running the Chicago marathon, we were in New York City where Brynn was presenting at the Performing the World conference. Since we have a lot of friends in NYC (and it's just a cool place to visit) I tagged along with her.

For the last three years we've gone to NYC for the New York City Marathon (for me in 2009, Brynn in 2010 and me again last year) so it was a nice change of pace to be going to New York in the fall without running the marathon. (Brynn actually did get in this year but deferred to next year because of Athens).

We spent most of the weekend hanging out with friends (and skipping our Saturday run), but yesterday morning we mapped out and ran a fairly epic 20-mile run that covered the Queensboro Bridge, Roosevelt Island, Times Square, the Hudson River Greenway, Central Park, the Columbus Day Parade... and a stop at Pier 54 to see the David Blaine Electrified stunt.

We started our run on East 94th Street and took the Queensboro Bridge over to Queens to get to the smaller bridge to Roosevelt Island, which I had never heard of before this trip but which turned out to be a pretty amazing place to run. This mansion/ivy-covered ruins is right on the edge of where the construction fence started for the not-yet-completed-or-fully-opened Franklin D. Roosevelt Four Freedoms Park so we could almost run to the edge of the island but not quite: 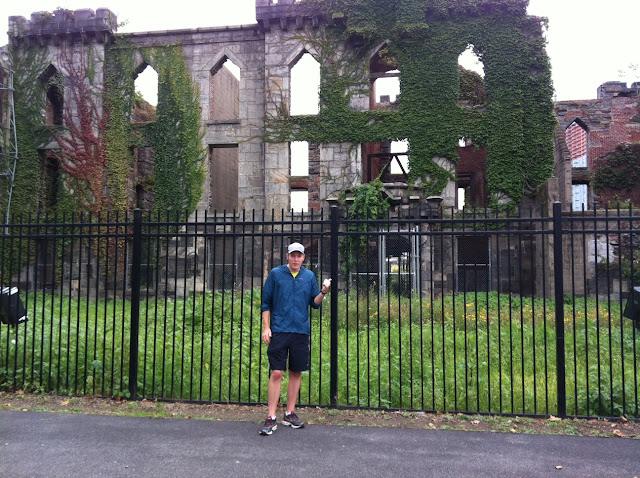 I can see why this is a good place to build a  park. There's hardly anyone on this island (at least on this end of it) and the views of Manhattan are pretty amazing: 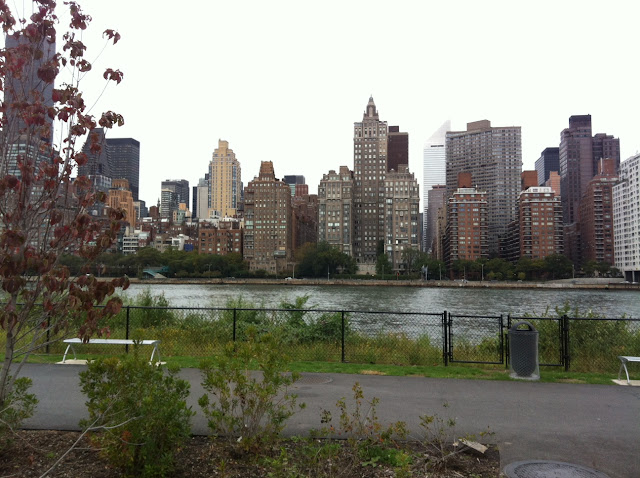 It was almost a little eerie running through this brand new park (all the benches were still shiny) all alone. We literally only saw two other people the entire time.

We ran back over the Queensboro Bridge and into Manhattan, weaving through various streets on our way to the other side of the island so we could head south to see David Blaine. On our way there we got stopped at around 51st Street or so by a Columbus Day parade. It wasn't the most exciting part of the parade but it was still cool... I can't say that I've ever had a long run interrupted by a parade before. But now I can. Life goal attained? 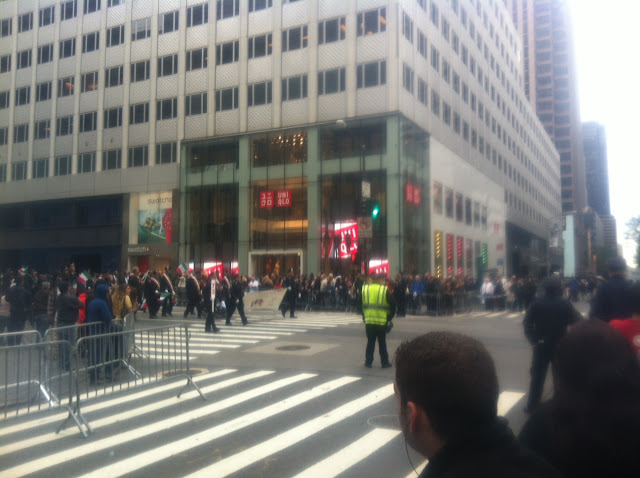 After getting through the parade we headed a bit south before heading west and got to the north edge of Times Square. We were thinking of running straight down through this but decided against it. Do you really want to fight through Smurfs on a long run? I did get a good shot of Brynn representing Chicago all up in NYC: 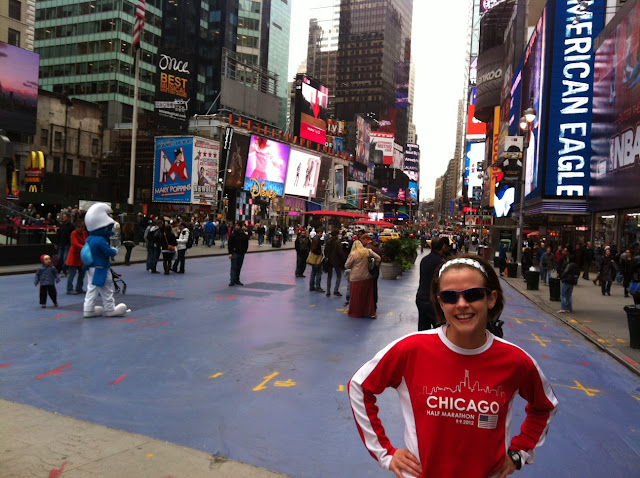 After this we just went straight to the west side and got onto the running trail (turning right where the Intrepid Museum is). We ran south on the Hudson River Greenway, which somehow neither of us had ever heard of but which was a really great trail for running. At Pier 54 (just south of 14th Street) we stopped in to see David Blaine doing his Electrified stunt (basically he's standing on a raised platform for 72 hours straight in a special suit being electrified by giant Tesla coils). It was surprisingly cool and there weren't really any people there so we could easily get right up close. They had a photo machine where we got to take a good photo of the two of us with him in the background. Here he is standing like a squirrel with some electricity hitting him in the head: 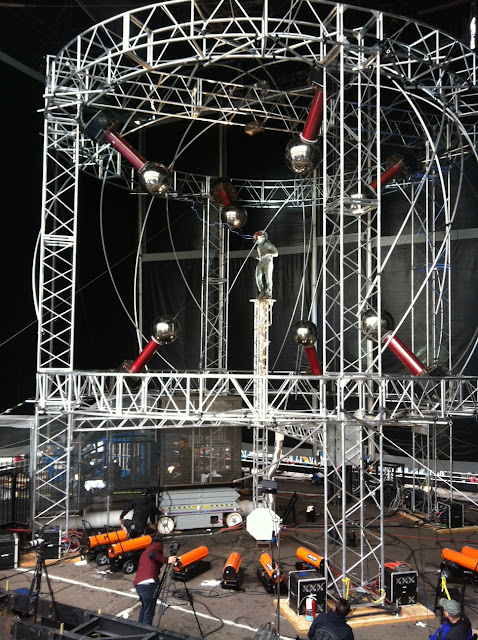 Leaving from here we ran back up the trail and entered Central Park at 58th and 7th Avenue. We just kind of followed whatever trails we came across here until we hit the reservoir. I first ran this reservoir over a decade ago with my uncle (who ran the Arkansas Traveler 100 this weekend) so I always love to run here when in NYC. 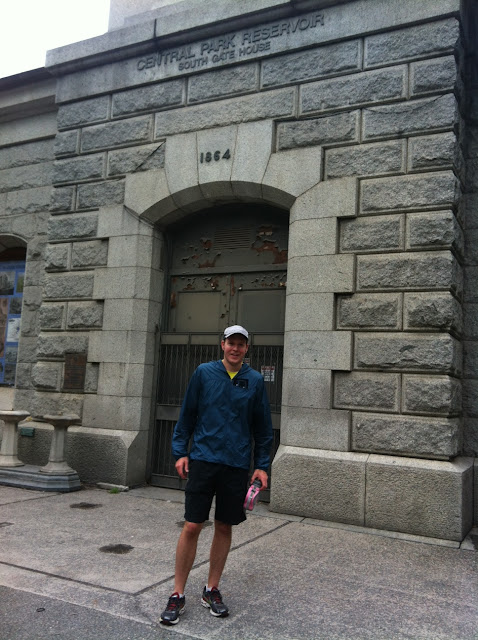 This is about where we finished. We ran north along the reservoir to around 96th before turning off and heading back to where we were staying. Though it only ended up being a 19.5 mile run (instead of 20) it felt both incredibly long and incredibly short. We saw a lot which made it all fly by but we also saw a LOT which made it seem like a pretty long run.

I'm a little surprised to say that I think we both enjoyed this as much as (if not more than) the actual NYC marathon itself. Obviously the streets weren't blocked off for us and we didn't have anyone cheering us on but we got to see a ton of great sights and follow our own course wherever we wanted. If there's a better way to be a tourist in a big city, I don't know what it is.