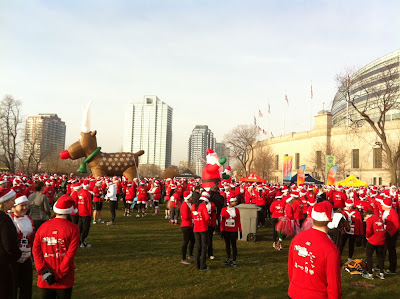 Santa is known for a lot of things, but as far as I know hustling isn't one of them. But this morning at the Santa Hustle 5K, around 8000 Santas hustled for at least a little bit. I've been to a few themed races but I think this one is my new favorite. Seeing (almost) all the racers wearing the Santa hat and beard that came in the goodie bag (along with the red Santa race shirt) was a pretty sweet sight. As I heard one woman remark to her friend before the race, "It's like Where the Fuck is Waldo." While I wasn't aware of that edition of the Waldo books (and I thought I had a pretty good collection of them as a kid), I think she did a pretty good job of summing up what the sea of red and white looked like.

My Newcity review pretty much sums up how happy I was with this race. I feel like a lot of "fun" races can fall into the trap of being all about just having fun, which leaves jerks like me who want to run "fast" annoyed with the wave organization or course layout or slow people in front of me. Labeling the pace groups in 30 second increments and letting us seed ourselves worked really well. There were probably only about 50 people in the six and six and a half minute groups combined (they ended up starting them as one group). It seems counterintuitive but I wonder if assigning waves or pace groups makes people feel unjustly boxed in and actually leads to MORE pace jumping... I was in the seven minute pace group so I don't know if this was the case across the board, but it seemed like most people got into their legit pace groups in this race.

Whatever the case, this thing was well-organized and even though I didn't take any of the cookies or M&Ms along the course, I really like the idea of passing out something different at the support stations. The announcer said 85% of participants did not consider themselves "runners" (I have no idea how they got that information...) and I think they did a good job of encouraging more people to get out on a cold morning and enjoy a fun run.

Also, I hope that it doesn't turn out that the course was short (UPDATE - see the comments below - I think the course was only 2.8 miles) because I think I set a new PR... (nope) and I think it was under 20 minutes, which is crazy to me. The clock said 21:57 when I finished and I supposedly started 2 minutes after the first wave... so by using the math skills that my Masters in Computer Science has imbued me with, I'm calculating that that would be a 19:57. But we'll see when the official results are posted.

I tried to keep the beard on while running for the full theme, but I was eating so much beard hair that I had to alternate between wearing it and spitting out Santa hair.

And in case you were wondering, here's what a sea of Santa Clauses looks like: 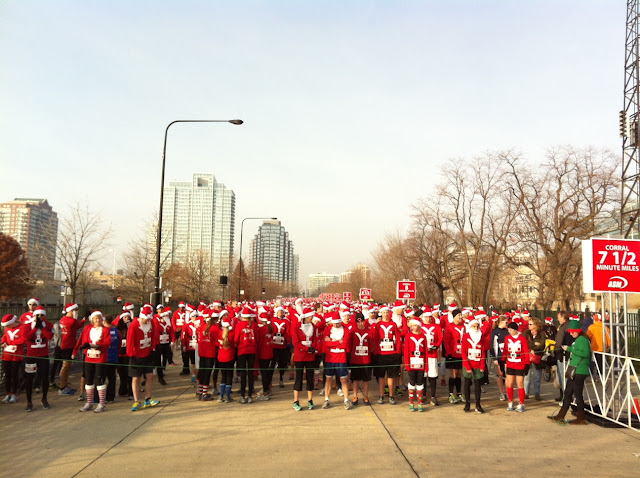 When I finished there were still a few waves that hadn't yet started, so here's what a sea of Santa Clauses looks like from another angle: 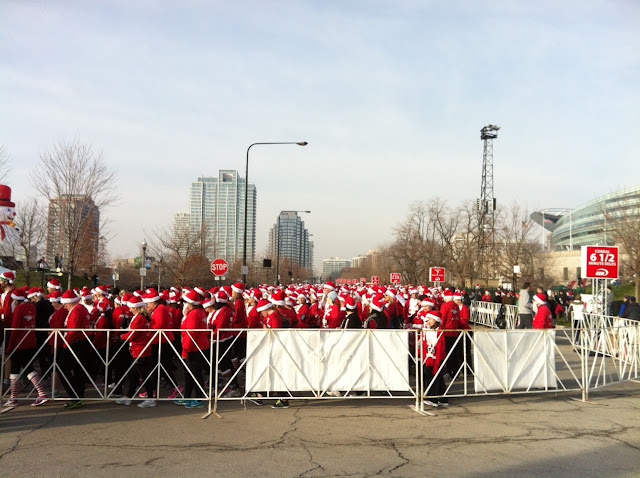