Jingling the Bells in the Rain 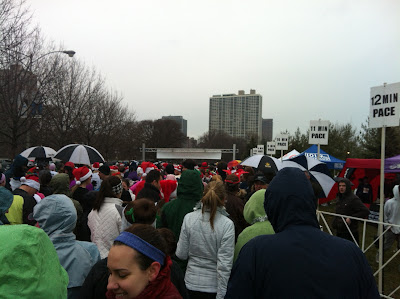 Since I had been keeping a close eye on the weather reports over the last few days I was a little disappointed this morning at how accurate they all turned out to be:

I was talking to another runner on the way to the starting line and remarked that the only change in the prediction for this morning was from a 70% chance of rain at 9am to an 80% chance of rain at 9am. She looked at me for a second and then said, "Well it's 100% raining right now so I don't think it matters anymore."

But despite the weather (which ended up being a blessing in disguise as it cleared out the course of non-participants) this was still a fun race and I had a great time running it... even if I saw Pete from The Lakefront Trail blow by me in the first half mile. He ended up in fifth place so I don't feel too bad. I think it's pretty safe to say that he blew past a lot of people!

I got a pretty bad stitch in my side at about mile four that slowed me down dramatically - probably because I started out way too fast (I passed mile three at around 22 minutes which is much too fast for me). I think I ended up around 49 minutes, so I definitely paid the price for starting out so fast.

I think I covered most of what I have to say about this race in my Newcity review so I'll leave it at that.

It started raining a few minutes after I finished and I got soaked walking back to catch the Clark bus... and I was worried about getting rained on during the race.