Give me a moment to think about that feeling again.

The race (the PAAWR to Empower 5K) started 40 minutes late, so after it was over I stuck around for a while, ate a really tasty black bean tamale and a not-so-tasty fish taco, chatted with some other runners, watched people play soccer... and then realized that even though there was an awards ceremony scheduled for noon, the odds that it would actually take place anywhere near that time were pretty low. Also I didn't know if there was any kind of medal or prize for first place anyway. So despite the fact that I have stuck around for way too many awards ceremonies that had nothing to do with me, I left the only race I will ever win without attending the awards ceremony where the crowning achievement of my running career would have been honored. (Maybe)

Then yesterday afternoon I got a voice mail from the race director. He was reaching out because they had a prize pack for me. I got in touch with him and we tried to work out when I could get to their offices to pick up the prize. To make things easier, he offered to just deliver it to my office today at lunch. Pretty convenient, right?

I should was prepared for this, though.I already knew that this guy was the director of a race that started 40 minutes late.

I met him in the parking lot and he was looking around when I walked up. He asked me confusedly, "Are you Zach?" When I told him I was he said, "Huh... For some reason I thought you were bigger." Thanks.

We talked about last month's race, about his future plans for the race (expanding the course within Warren Park, trying to get more people from the running community involved) and just about running in general. Then he opened up his trunk and gave me my winner's prize basket. 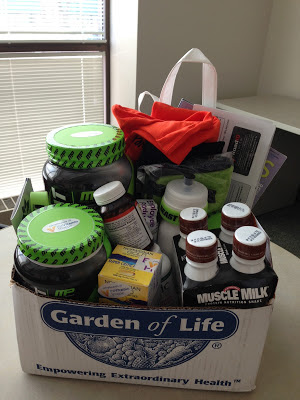 And like the race, the prize basket was a pleasant surprise. It was a pretty big box of vitamins, MusclePharm supplements, a four-pack of Muscle Milk, a PAAWR to Empower shirt, a MusclePharm shirt, a water bottle and a $15 Road ID gift certificate.

I don't really ever use supplements and there are a few too many digestive vitamins in there. But still. I wanted one of the PAAWR to Empower shirts when I ran the race (you had to raise $100 to get one) and Muscle Milk is always good.

Also, and most importantly: I got a prize basket!

So, as I'm walking up the stairs and back to my office with this giant box of supplements that you see on the right, I walk past a professor. One that I'm familiar with but that I've only worked with a few times. She recognizes me, smiles me, says hi, and then does a very appropriate double-take. "Did you just buy all that?"

I tried to explain myself really briefly, but I think it just made things more confusing: "Oh, I just got all this stuff because I won a 5K a few weeks ago."

She just nodded politely at me as if winning a 5K weeks ago explained why I now had a giant box with me in the middle of the afternoon.

Also, if I decide to start pumping iron any time soon, I've got plenty of stuff to get me pumped up. 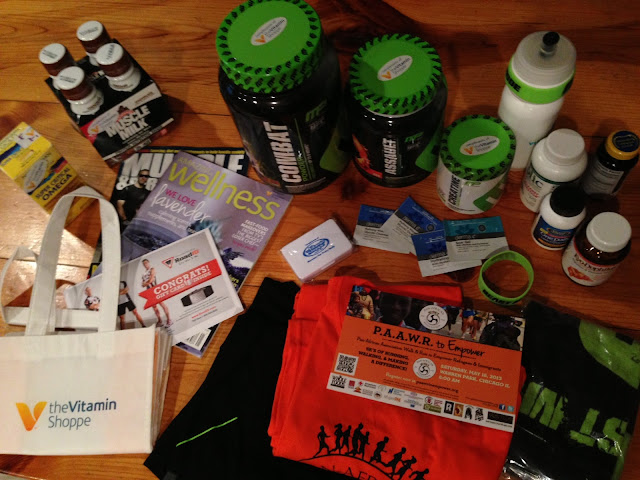