January 12, 2015
In 2013 I discovered a crazy race called the Frozen Gnome. It's in Crystal Lake and what makes it crazy is not just that it's a 10K trail race in early January but that it also has a 50K option tied in with it. This seemed crazy when I ran the 10K a few years ago when it was 25 degrees, but on Saturday morning with the temperature stuck at -2 (let's not even get into what it was with wind chill) it seemed truly insane (in the nomenclature of this article "insane" is less rational than "crazy").

At 6:15 I got into a car with my friends Anh and Mike to head to Crystal Lake. We all had on more clothes than I think we've ever worn to run in. Personally, I had on running boxers, tights, pants and shorts as well as a pair of wool socks and a pair of tube socks (from the Original 5K) and a wool running shirt, regular running shirt and two jackets. By the time I was at the starting line I had also added two pairs of gloves, a balaclava and a hat to my outfit. I may have gotten a bit warm on the course by the end, but I still don't feel like this get-up was overkill.


We got to the race around 7:20, checked in and collected our sweet Frozen Gnome hats and numbers and then went back to sit in the car and wait til we absolutely had to head to the starting line (seriously, it was -2 degrees). 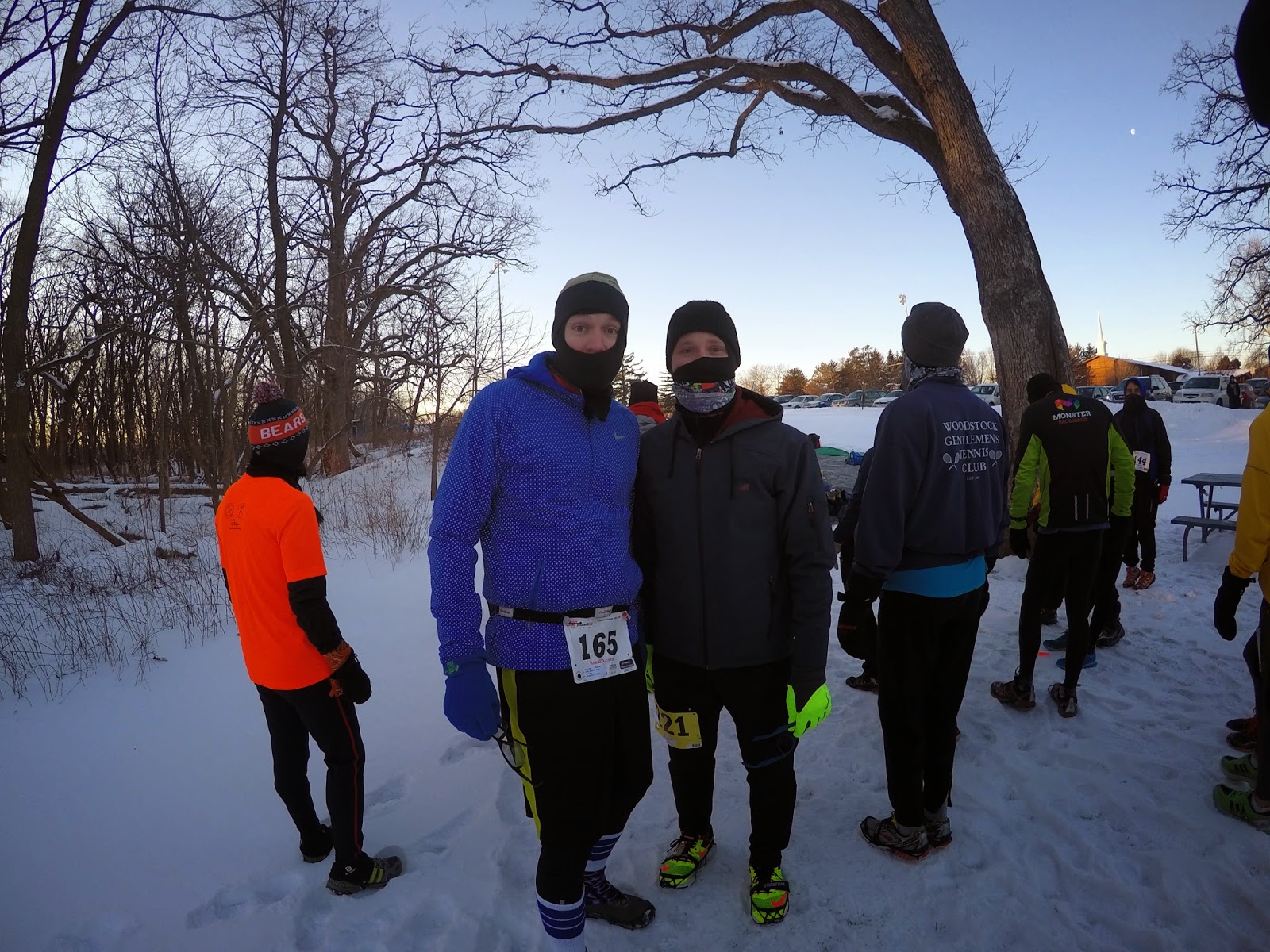 The race kicked off right at 7:45 - I don't think any of the runners were ready to stand around and tolerate a starting delay. There was a good deal of snow on the ground, but luckily we all had cleats for our shoes which alleviated some of the slipperiness of the various hills throughout the course. 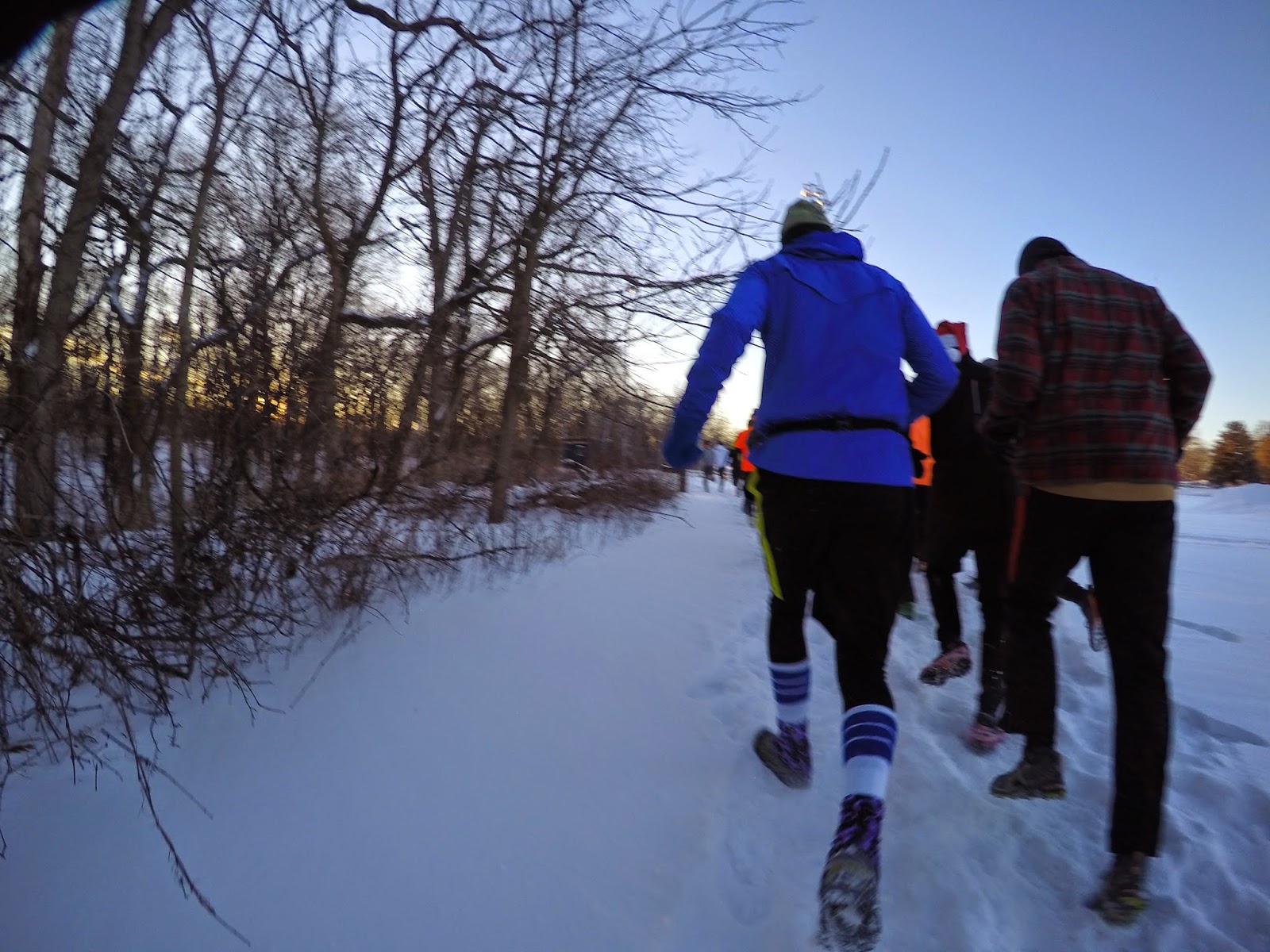 Almost immediately after starting I ran into difficulties. My exhales into my balaclava were creating condensation and then freezing making it harder to breathe. I also had to take my sunglasses off after less than a minute because they fogged up and then that fog froze. It also felt like within my two pairs of gloves all of my fingers were solid chunks of ice. I removed both gloves from my left hand and tried warming my hand in my pocket but it only made it worse so I put the gloves back on. Very quickly I realized that I had to remove my balaclava to be able to breathe, which meant running with an exposed face, but plenty of other runners seemed to be handling this fine so I took the plunge. At first it was a shock but then I got used to it and only really noticed on sections of the course that came out of the woods and allowed the wind to really run across the trail.

For the most part, the entire course was in the woods - up and down various snow-covered hills (including one so steep that you were supposed to slide down it and get a fun picture made... I didn't realize this and so fought heartily to maintain my balance while making my way down an extremely steep incline - "That's dedication," the photographer yelled as I was halfway down. I only realized when the next runner slid down, cheering loudly, that he meant it as a joke.) 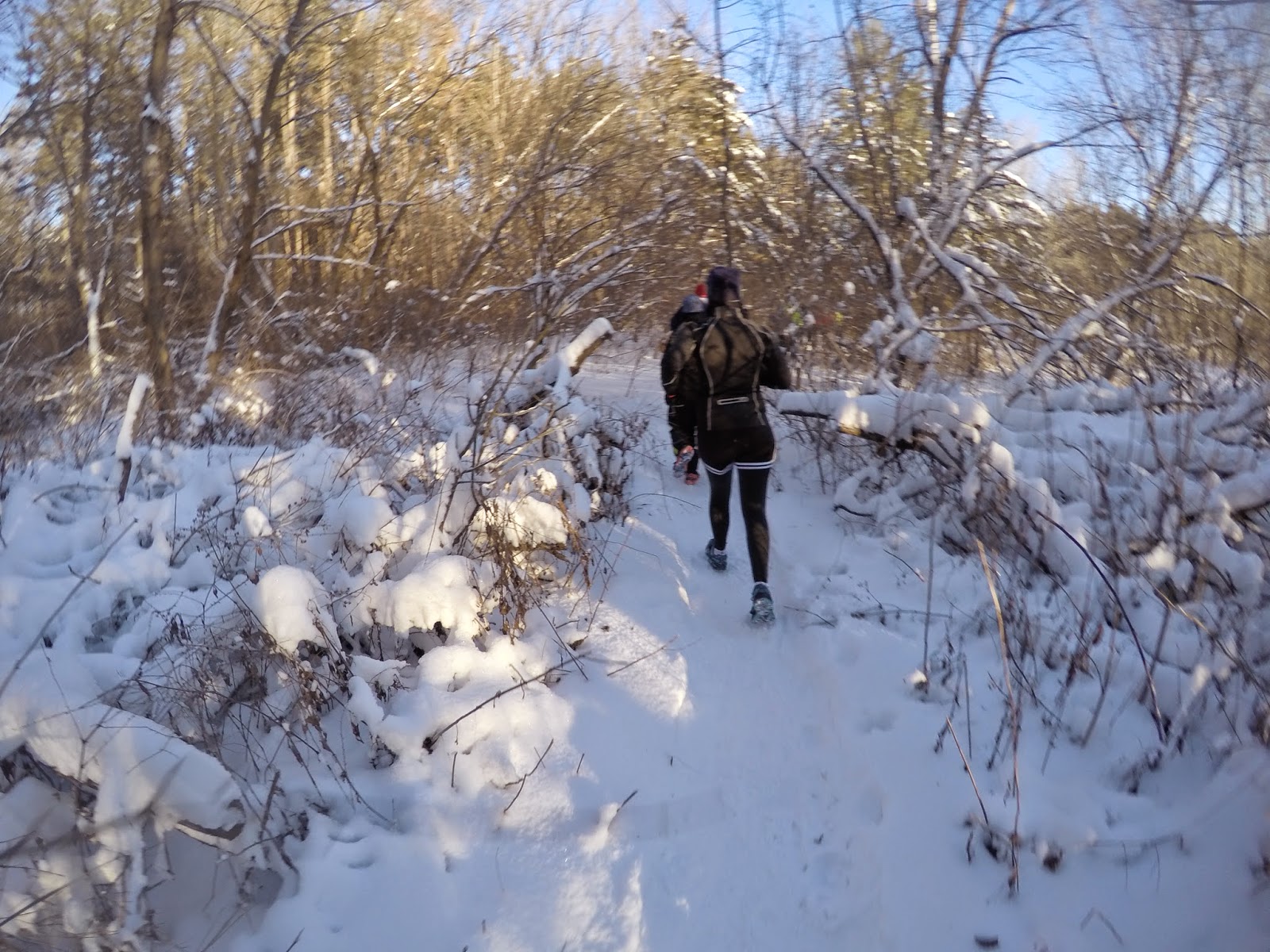 As you can see in this picture, the majority of the trail was very snowy and just wide enough for one runner at a time, making passing a rare occurrence. Luckily after a few miles, runners started to spread out and I found myself mostly alone for the rest of the race. During this time both good and bad things were happening: my fingers started to warm up and icicles started forming on my eyelashes.

Around mile four there was an aid station with a water cooler - there weren't any cups but as I approached, a runner was kneeling in front of it with a volunteer pouring water into his mouth. I definitely didn't want to risk getting any water on me and having it freeze so I passed on refreshments and kept going. Throughout the run there were so many amazing views - snow-covered trees, the rising sun and rolling hills (the rolling hills were made a little less amazing when you actually had to run up them, but still).

I finished over 13 minutes slower this time around than I did two years ago, but it was still good enough for 29th out of 121 runners. First place was a 52:04, which says a lot about how hard this 10K was! In fact, Anh was part of a group of runners that got so completely lost on the trail that they gathered together on top of a hill to discuss which way was the best way to get to the finish line (see above photo).

While it was definitely exhausting (and maybe even a little dangerous) to run in these conditions it was an absolutely thrilling experience. I was surprised to feel a little disappointed when it ended - not that I wanted to throw my hat in with the 50K runners and keep going for several more hours, but I definitely felt warmed up enough to run for a while longer.

But with the race over and with the (very sweet) Frozen Gnome knit caps on our heads, we ran to the car and then drove as quickly as the icy roads would allow to a nearby diner for breakfast. If you're looking for a challenge (and some great race gear), I definitely suggest that you add the Frozen Gnome to your list of races. 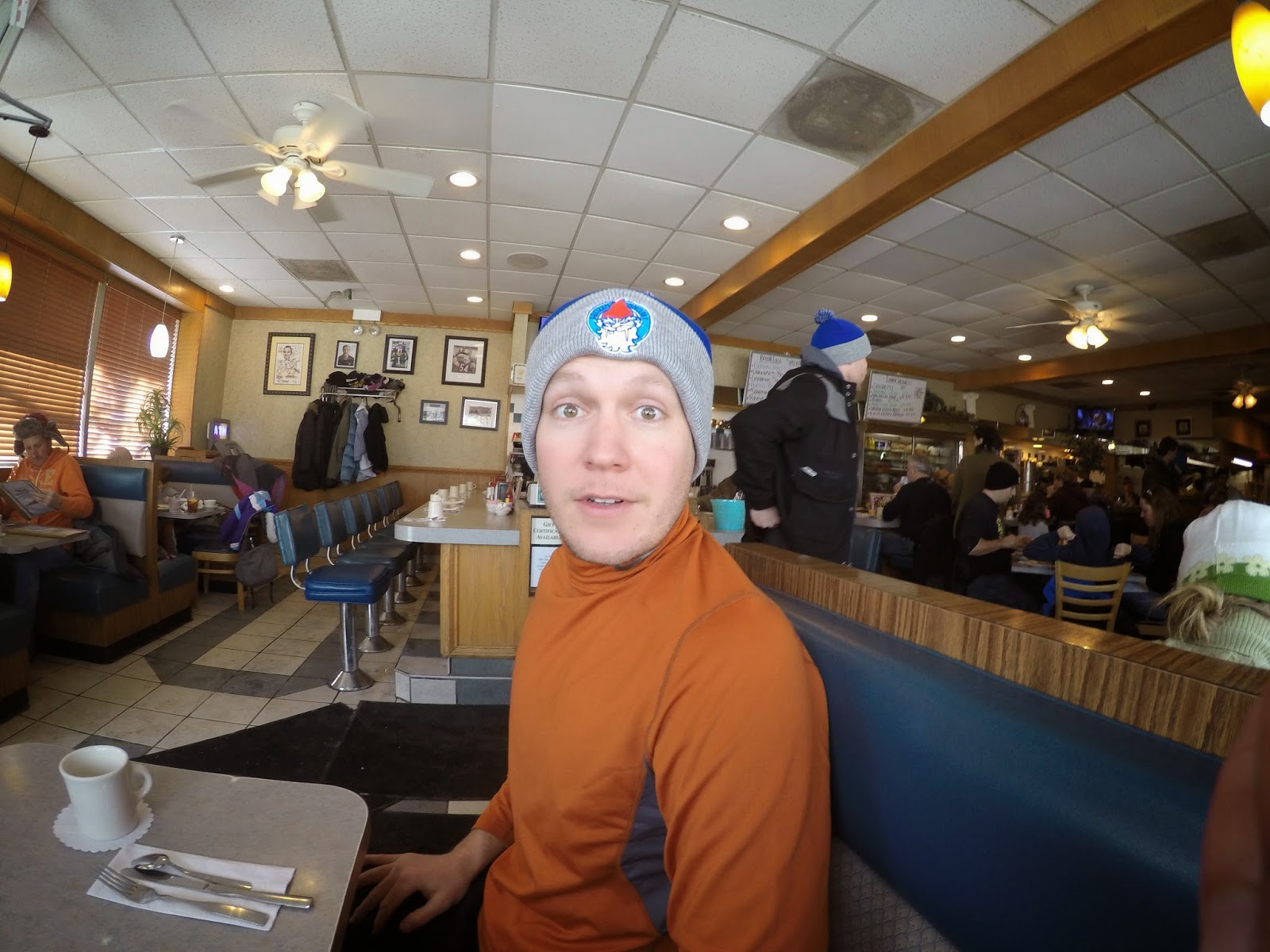