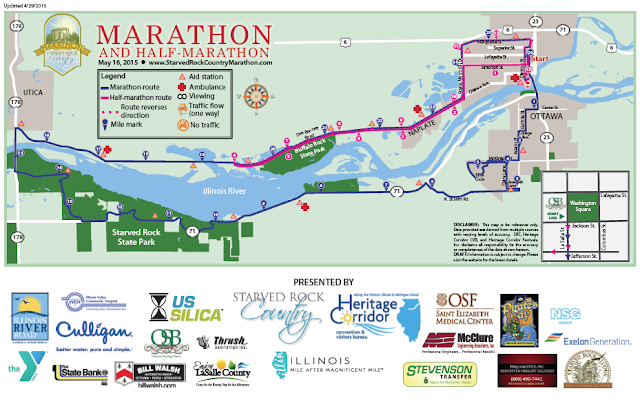 At the end of last month I ran the Big Sur International Marathon. And I'm not going to lie. It was hard. It was so hard that it didn't just hurt my legs. It hurt my feelings.

And as I was sitting at home thinking about my hurt feelings I saw another upcoming marathon that looks picturesque and unique: the Starved Rock Country Marathon. So, I did the appropriate thing and signed up for another marathon - why let all that hill training from last month go to waste!? The race starts Saturday morning (May 16th) at 7am in Ottawa, Illinois.

Previous to Big Sur I had only done large marathons (Chicago, New York, Athens) and after getting a taste for what a smaller marathon can be like, I'm excited to go even smaller (right now there are around 230 people registered for Saturday's marathon). This is only the second year for the Starved Rock Country Marathon, but judging from the course (part of the course goes through Starved Rock State Park!) and the feedback to last year's inaugural race, it looks like it should be a good one.

To get a little more background on the race and what to expect this weekend I got in touch with race director Matt Skelly. He said that the idea for a Starved Rock Marathon came from a joint meeting between Starved Rock Country and the Heritage Corridor CVB.

"Both have a mission to bring people to the area," Skelly said. "And from that we discussed the lack of a long distance run in the area. The idea was born to create a run, capitalizing on the natural beauty of the area as well as showcasing what makes the area (in tourism terms) so wonderful and providing a great running event for runners in and out of the area."

I pointed out that there are a few hills on the elevation map for the race and asked him to highlight any other parts of the course that might stand out. "To get up the first hill, you wind through south Ottawa neighborhoods and then at mile 10 you'll find yourself looking at Dimmik Hill, which looks worse than it is, but is a scenic climb into some great forested running. The actual park itself is nice as you enter through a re-planted prairie and then run by the historic Starved Rock Lodge. Runners will see the river from atop both bridges crossing the Illinois, but the best views might be the Rt178 bridge after leaving Starved Rock State Park."

For half marathon runners, Skelly says, "The course is flat and while it is an out and back, it does run through Naplate (as does the full on the return) which is a great small town with amazing restaurants."

When I asked him how the rain this week might effect the course he said that the area really comes to life after a rain. Runners can expect "green trees and grass, cascading waterfalls (on the full route only). The route is scenic and like most roads and highways is pretty water-friendly."

But, it's not just the scenery that got runners to sign up last year, and to come back this year. "Our feedback told us that they liked the small town atmosphere and feel," says Skelly. "We know we are not Boston, Chicago or other more established races, and we are okay with that. In the end what we are about is having a great safe day, promoting physical fitness and promoting our area to others. In 2014 we set, what the runners and committee felt, was a high bar for our first year. Even in small town America like Ottawa or Starved Rock Country, we believe we can put on a world class event like the Starved Rock Country Marathon and people will come."

Now I'm looking forward to this race more than I already was! I only wish I would have made the inaugural run as well.