May 16, 2015
Have you ever talked a big game and then found yourself having to back it up? It's not a particularly exciting position to be in. And at mile 21 of the Starved Rock Country Marathon this morning, that's exactly where I found myself.

Just last weekend I was talking to a dude at a bar (The Grafton Pub, to be specific - cool place if you're in Lincoln Square) and he was describing watching runners getting pulled from this year's Illinois Marathon due to rain last month. He asked me what I would do if that (being told to quit a canceled race) ever happened to me.

"I'd just ignore them and keep going," I said.

"But what if they're like, 'The course is closed - you HAVE to stop running!'?" he asked.

"I'd just run around them."

So... it sounded pretty straightforward to me at the time. But this morning as I was halfway through the course and it started pouring (not raining, seriously pouring) and just as I found myself on a long stretch of straightaway with flat farmland on either side of the road, lightning started striking, I thought, "If they cancel this race I will immediately jump in whatever vehicle they send to get me."

Not that a few inches matters in this scenario, but when you're 6'2" and running along a flat, treeless expanse of road, and you can see the lightning striking ahead of you you start to think, "I am actually the tallest thing on this road right now." This was not a good thought to have. And it made me suspicious of the shorter dude who was suddenly running next to me.


But despite my secret wish that some official race vehicle would suddenly appear on the horizon and scoop me up and out of the rain, nothing happened. And after about 45 minutes of steady, pounding rain - enough to make my shoes feel like leaden weights I was carrying around with me and to make me worried about my chip-powered car key in my back pocket - the rain dissipated and then stopped completely. A few more dry lightning strikes and thunder booms and the storm was gone as quickly as it had come. And so was my desire to get off the course.

But then between mile 20 and 21, with the storm behind us, this happened:


Unfortunately I only recorded 10 seconds of the announcement, but the rest of it just said that they were no longer timing, we had to stop running and when we saw the bus pull up next to us we had to stop running and get on it. HAD TO. At first I thought, "This doesn't matter." But the more the announcement was repeated, the more it sunk into my sodden head that the race was definitely over and that the exact scenario I had played out in a bar only seven days earlier was actually happening. And I was going to quit. I was not going to be defiant. Because I was in the part of any marathon that is the worst part, when you've just realized that your body doesn't want to keep going and your brain is going to need to bully it into continuing.

I took this photo of mile 21, thinking that would be as far into the race as I got: 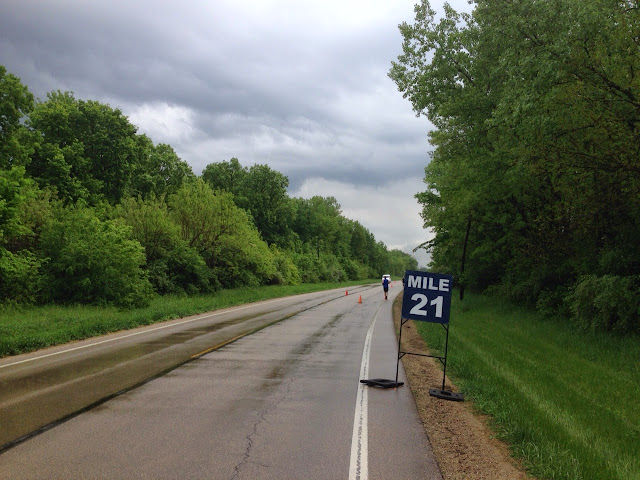 And then, just as I was starting to walk in defeat, some kind of angel woman appeared - you can actually see her car in the Mile 21 photo above - and as she drove by she yelled out her window, "The time is still running! You're still being timed! Keep going!"

I have to be honest and say that I was partly disappointed to see her. I mean, I had just made up my mind that I was going to quit running and, seriously, it was a huge relief. I was soaking wet and hitting the wall. Getting on a bus sounded awesome.

A few minutes later the oft-mentioned-but-never-seen bus did make an appearance and the driver gestured for me to get on. The runner in front of me stopped running and climbed on in defeat. I stopped as well, but as I was heading for the doors I thought, "This bus is heading back the way I've already come! I'm not going back there!" and I turned and kept running instead. I felt like some kind of  truant middle schooler, running from the school bus.

A few minutes later two runners - a male and female, the man holding a pace sign for 4:30 - ran past me. "Didn't get on that bus?" she asked.

"I was on a bus already," she said, conspiratorially. "Once I saw runners ignoring the bus I made the driver stop and I got out and started running again." Then the two of them sped up and left me behind. I saw the 4:30 pace sign sticking out of a trash can at the next water station and for some reason that made me really happy. Like they said screw the system too or something.

So, to make a long story short (or at least shorter), I finished this marathon. It wasn't pretty. I only cut two minutes off my Big Sur time and Big Sur was a much harder race. And it rained (really, just sprinkled) a few more times along the way. But it didn't really matter. I had lived out the boldly unsupported claim I made to a stranger in a bar: they told me to quit and I didn't. And that made this finish line (which did have medals and a running clock and volunteers and spectators and DELICIOUS ICE COLD CHOCOLATE MILK) especially important to me: 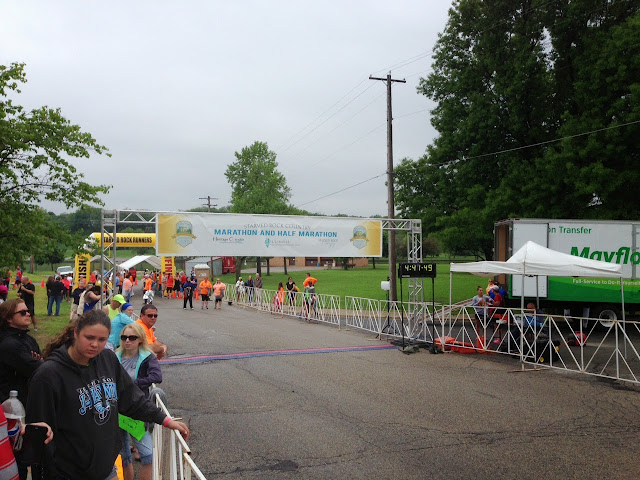 And even more important than that, it made finishing the race feel like it mattered. This is only my eighth marathon so it's not like I'm burned out or cynical on the marathon thing yet, but big races can make you feel a little bit like a number. Not only was this one small - 156 finishers!! - but it had a very small town feel to it. And the volunteers really cared. Especially in those last five miles I could tell that they wanted me to keep going.

They were standing in the rain, almost as bedraggled as I was, but smiling, cheering, dancing and egging me and the other runners on. Even the police officers - blocking the streets off for a race that had officially been called off - were smiling and clapping for us and making more of an impact than I'm sure they even knew.

It wasn't a perfect race - and I certainly didn't feel very perfect at the finish line - but it had the dedication and heart of a second year race that still wants to prove itself, and wants you to prove yourself too. And as I made the last turn towards the finish line, I saw the bus I had ignored idling beside the course. The bus driver leaned out the window, gave me a thumbs up and a huge grin and said, "YOU GOT THIS MAN!" No one but that bus driver could have delivered that message to me in a better way.

To be clear, I don't judge the runners that got on those buses. I was so close to doing it myself. But I'm glad I didn't. And to the random guy at the bar asking me this question I can now say that it's not a hypothetical: if the race is canceled and they tell me to stop running, I don't care. I will shuffle along in my water-logged shoes and cross that finish line anyway.

*As a logistical note of closing, I did hear a police officer near the finish line discussing the whole "officially closed race" scenario with some spectators. I was in post-race la-la-land, but the gist was that race officials MUST call a race when there's lightning, but they don't have to close it and they don't have to stop offering support. They just have to give runners the very clear option to stop running and get to safety. And that's what the organizers did here. They told us in no uncertain terms that the race was "officially" over and that we "had" to stop. But they told us unofficially, via angel car woman, that we could keep going. And if we kept going they supported us. And if we stopped they supported us. That's good race coordinating.