May 21, 2012
This weekend was the first weekend I didn't participate in an organized race since mid-March. It felt kind of weird not to be waking up early to head out to a starting line somewhere. Luckily my wife got me motivated to get out for a long run anyway, since we're both running the 13.1 Chicago Half Marathon next month.

So on Sunday we ran 10 miles on the lakefront, making our turnaround at Montrose Harbor, after cutting through the quiet nature trail just south of Addison:
And then finding out that the trail on the east side of the golf course (the one that takes you right into Montrose Harbor) has been mostly washed away... and transformed into a pretty sweet obstacle course:
After traversing the sinking trail of doom we passed a few other runners heading south from Montrose Harbor that probably made it across this challenge, but there were also two bikers and a guy with a dog that I'm pretty sure had to turn around. Instead of just heading back down this trail we chose to head south on the official Lakefront Trail.

We ended the run at Oak Street Beach, where it looks like they're setting up the little cafe for the summer. We saw a semi delivering a pile of cedar here on a morning run last week, and it looks like they're putting it to use now. Since they're doing so much cutting, everything smelled like cedar around this area, which was great: 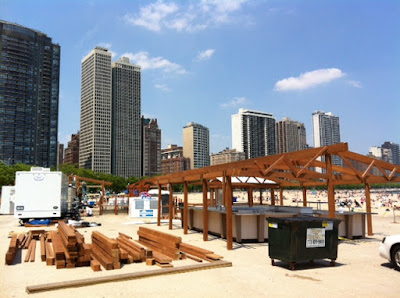 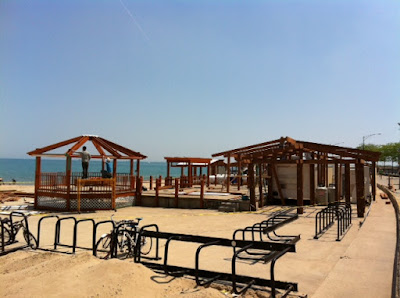 I heard that a new company got the contract for this location this year so I'm excited to see what kind of place goes up here.

So even without any official run planned, I still got a 10-mile in on Saturday and a (much more difficult) 4-mile in on Sunday. Both days were fairly warm, but Sunday was especially humid, making 4 miles seem a lot harder than 10.

I'm excited about the JPMorgan Chase Corporate Challenge on Thursday even though there's a high of 85. Last year it was in the 40s and raining, so I'm definitely not complaining about the temperature being in the 80s, especially because there's usually a pretty big collection of post-race party tents afterwards.