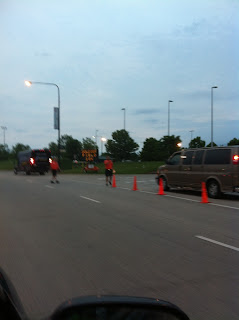 One of my friends picked me up first thing this morning (by that I mean 5:20) to head over to Soldier Field for the race. For some reason I figured we had to get there around 5:30 to make sure we found parking... It ended up not being a problem at all - we went right in and parked without an issue, which was pleasantly surprising. Although I did notice that all the signs directing cars to the parking lots said "Soldier Field 10K" - sign fail.

Anyway, we ended up with tons of time to spare (my estimating skills are off for parking since I'm used to just taking public transportation). There was a lot to see, including the tiling of the finish area and the set-up of the finish (below).

My full review of the race is at Newcity.com but the shortened version is: it was really sweet. 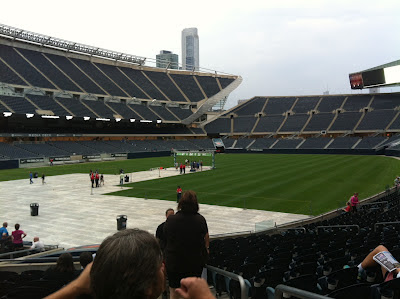 The only downside was that I had registered a while ago when I was running at a much slower pace than I am now so I was in corral 10, a bit farther back than I should have been. I probably could have just gone to another corral, but I'm a rule-follower so I stayed in corral 10, which meant I spent a lot of time trying to get around people during the race. But that's not necessarily a bad thing - it also meant that I spent the majority of the race passing people (rather than the other way around, which has definitely happened before). It's kind of motivating to pass that many people in the course of a race, but it also slows your time down when you're spending so much time weaving in and out of a crowd. It did make me especially annoyed by walkers who started in corrals in front of me... if you know you're going to be walking, why would you try to be in one of the early corrals?

But the course was plenty wide and the finish line was as impressive as ever. I did miss my goal by 13 seconds, but oh well, that happens sometimes. 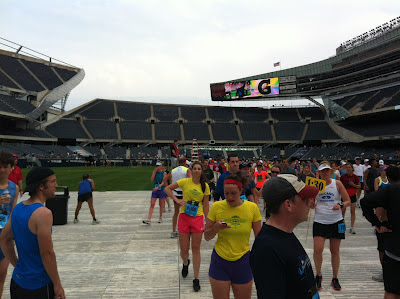 A final note - I know I'm going to sound like a salesman here but I'm really being sincere. The Houdini jacket that I won in a drawing at Patagonia last month was PERFECT for today. It was pretty windy before the race and a little chilly, even though it was in the high 60s/low 70s. Once the race started I immediately took the jacket off and tied it around my waist. And unlike a normal jacket, this one is so light that I honestly kept thinking that it must have come untied and blown away. I kept reaching down and grabbing it to make sure it was still there. For weather like today (a slightly chilly wind on an otherwise warm day) you really can't beat it. Thanks again Patagonia!