May 05, 2012
Walking up Roosevelt from the train towards Soldier Field (and the start of the 8th Annual Run to Remember), I was amazed by the cool weather and the amount of fog enshrouding the city, especially since only a few days earlier I had run to the Chicago Police Academy in the morning to pickup my packet in 80 degree weather.

For the walk down Roosevelt I was glad to have the Patagonia houdini - for such a thin jacket it provides a surprising amount of warmth. It was also super-easy to take off and put in my pocket just before the race, since I had decided not to check anything.


Anyway, Soldier Field looked pretty impressive in the fog at the starting line: 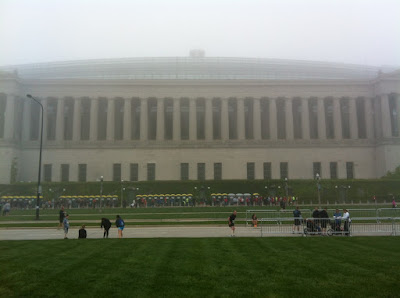 There were a lot more people than I expected at the start of the race. I guess I forgot that it was a run/walk and was only expecting about half as many people to be there. I met up with some members of the Media Team (led by the awesome Dina Bair) and waited for the race to start. A brief speech by Del Pearson added some perspective to the reason for the run.

Overall, it was a great run, and my full review is available at newcity.com.

The best part of the race was coming out of the tunnel under Solidarity Drive and seeing all the photos and names of the police officers that died in the line of duty. There's a great picture of the signs about halfway down the page on today's post in the running blog "Pain is nothing."

The post-race party had a really great selection of food and drinks - especially the free Paisano's Pizza and Dunkin' Donuts coffee. There were also frozen bananas that people seemed to enjoy but I absolutely hate bananas so I can't comment on those.

Standing near the stage where they were announcing the winners, I took a picture of this guy's (really sweet) shirt, just before they read the winners. And I'm pretty sure he was announced as the winner of the race... so I don't think his shirt is actually a joke.

And  here's what I wish they would have used as the lead car... but I guess it wouldn't really have fit on the lakeshore: 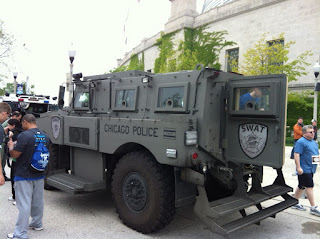 Now it's time to plan for tomorrow - I'm running C4Miles at 8 and then the Cinco de Miler at 9:30, so I've got some coordinating to do.