April 04, 2013
All last week I was in New Orleans working with the St. Bernard Project on a house in the Lower Ninth Ward. It was an incredibly rewarding experience but also eye-opening... and all those other things that experiences like this are. I'm well aware that there's no way to talk about it without sounding self-indulgent so I'll just stop there.

If you want to donate to the St. Bernard Project (they need all the donations they can get) you can do that on this First Giving site. And if you're ever in New Orleans I think St. Bernard Project even does just day-long volunteer assignments so you can help out for just one day if you have extra time.

But the main point is that while I was there I got some running done in the mornings and the city is pretty awesome to run through. Especially down South Carrollton Avenue where I was staying because there's a green space in the center of the street where the streetcars run. I guess that's where runners usually run (instead of on the sidewalk) and it was even better this past week because the tracks are under repair in this area meaning that I didn't have to watch out for streetcars coming at me: 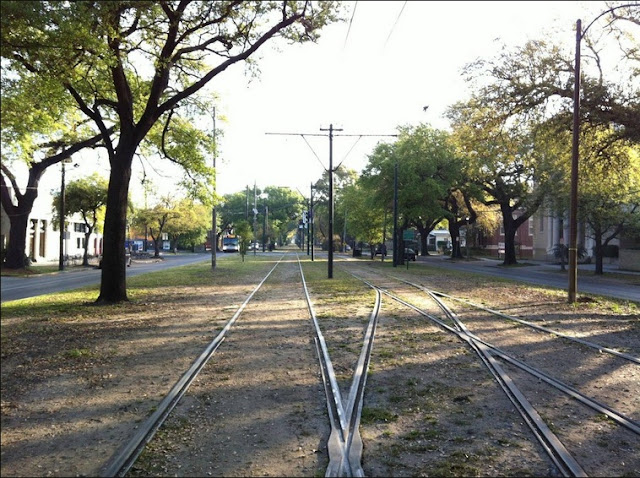 There are some train tracks where Carrollton runs into the Mississippi river and the first morning I ran a train came by right as I got there, so I got to run beside a freight train for a while, which is something I never thought I'd do. 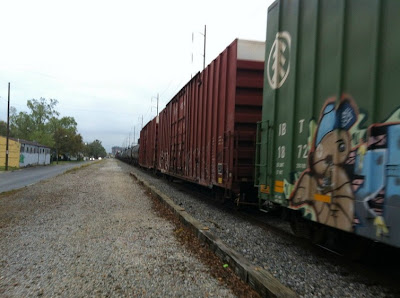 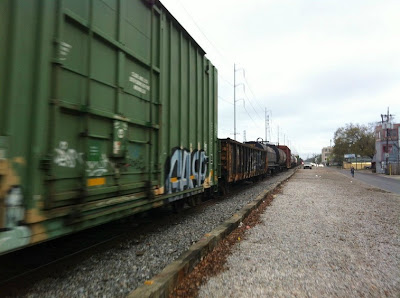 Anyway, those are all the running pictures I took.

Here's one from nearby the house we were working on in the Lower Ninth Ward. This neighborhood is still devastated and hundreds of families are still not back into their homes almost eight years after Katrina.

On a Chicago note, I'm looking forward to running with the media team this weekend at the Shamrock Shuffle. Dina Bair is my team leader and she set up a donation page for our team...