Book Review: Spartan Up! A Take-No-Prisoners Guide to Overcoming Obstacles and Achieving Peak Performance in Life, by Joe De Sena 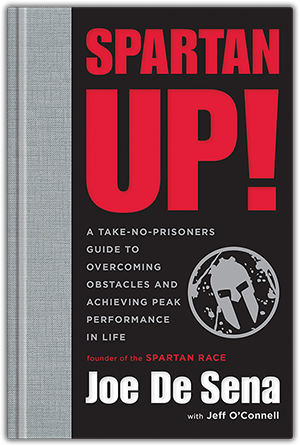 Just finished "Spartan Up! A Take-No-Prisoners Guide to Overcoming Obstacles and Achieving Peak Performance in Life" and I have to say that I haven't felt so strongly divided about a book in as long as I can remember. On one hand, the authors have penned a well-written and powerfully motivating self-help book that in simple, straightforward language gives the average reader an insight into how to improve their current state in life (above and beyond the arena of health and fitness). But at the same time a good portion of the book is spent repeatedly endorsing Spartan races as a sort of cure-all for what ails you (obesity, depression, loneliness, etc.) and the authors often quote research or make claims without properly citing or even substantiating their assertions.

But let's start with the good - and there is a lot of it.

By all accounts, Joe De Sena is an impressive guy (I did a brief interview with him a few months ago). And the Spartan race series is not only a quickly-growing brand but an exciting series of events that offer varying levels of challenges for everyone from a (relatively) out-of-shape everyman to an elite athlete on a quest for an endurance challenge. In "Spartan Up!" De Sena (with the help of Jeff O'Connell) spells out the mythology of how Spartan races got started and how his own search for harder and more challenging ultra endurance races prompted him to create what is now a veritable racing empire.

In the course of describing his riches-to-rags childhood and subsequent career in the pool industry and on Wall Street he also gives out tidbits and suggestions on how we can all become better and happier people by working harder at life and becoming more mindful of what we do, what we eat and how we interact with others. Most of his tips have a certain gut-level feeling of truth to them. In a chapter entitled "Changing Your Frame of Reference" De Sena discusses how when you are used to comfort and convenience, difficulties are a lot more difficult to overcome. But when you reframe so that your day starts with a painful morning workout, you're more likely to appreciate and feel grateful for the relative comfort of the rest of the day. This will lead you on a path to self-improvement in other areas. Again, he ties this back to Spartan Race: "When extreme events become your 'new normal,' you develop something greater than endurance, and you learn about more than mere survival."

While much of the book is dedicated to becoming physically healthier, there is a good deal committed to mental health as well. De Sena is quite open about his parents' short-comings and his own struggles during childhood, but he uses them as an example of how improvement is always possible, and how even negative emotions can be redirected towards positive outcomes. It's all very convincing and I can see it motivating portions of the population who might not be encouraged by other types of exercise or self-help. De Sena is cool and so is Spartan Race, so his advice comes from a very charismatic place. When De Sena recommends a mostly vegetarian diet and plenty of yoga, it's a lot harder for masculinity-crazed dissenters to scoff. And that's a good thing.

In short, De Sena is a motivational writer (and likely a charismatic leader and speaker as well) and this shows up throughout this book. I, for one, definitely feel that reading this book will cause me to make several (perhaps small, perhaps large) life changes on a day-to-day basis that will likely improve my quality of life. One of the simplest and perhaps common-sense ones that he recommends is using any free time (waiting in an airport, before breakfast, etc.) to stretch and get in some exercise. This is an easy change to make and a way to remain constantly aware of your body and the way you are using it moment-to-moment. And for that, I thank De Sena and O'Connell for this book.

So, now the downside. Considering that this is a motivational self-help book and not a psychology or sociology text these may not be that big of a deal, but I do feel that there is a certain level of citation and transparency about sources that comes with writing a book like this and it can be distracting when you feel intentionally misled, whether by implied correlations from a position of authority or the autobiographical attribution of fictional morality tales.

As an example of the former, on page 80 the authors boldly claim that "Entitlement and overindulgence come out of the epidemic of divorce in the past few decades, and the intensification of fear of the outdoors has proliferated through the pervasive bad news on twenty-four-hour cable networks." Says who? To be clear, I'm not disputing these claims, I'm merely asking the following: with what data set or series of studies are the authors substantiating these two sweeping (and rather unrelated) declarations? This is an important claim and some research should be cited.

As an example of the latter, at the end of several chapters are sections with the heading "Life Lesson." These small anecdotes are moving and informative, but they're also very familiar, generic stories told in the first person as if they actually happened to the author. Like a politician, De Sena has co-opted these common cliches and made them a part of his own story.

For example, chapter nine ends with the "Transfusion Confusion" story, presented in first person: "Many years ago... I got to know a little girl named Liz who was suffering from a rare disease..." As Snopes explains, this story dates back at least to the 1970s and was even included in a "Chicken Soup for the Soul" compilation. Similarly, the end of chapter four features the "Everyone Matters" lesson, which is just a rehash of this story that has been quoted for years, but once again framed as a life experience the author actually had: "During  my second month of college, our professor gave us a pop quiz..."

Obviously it's not a big deal to quote generic stories - there's a reason they've been quoted so often that they're familiar - the question is why not just label them as such rather than implying that these events actually took place in the context of your (already impressive and inspiring) life?

Throughout, De Sena offhandedly lists various people he has met along his journey that have benefited from the Spartan Race series. Whether they are going from being dangerously obese or have suffered a devastating injury (and the majority of the people he lists fall into these two categories), these "real" people regale De Sena with descriptions of how Spartan Race changed their lives. I have no doubt that Spartan Races have changed many people's lives and lifestyles, but given the quoting of the above adages as truth it becomes a bit of a stretch to believe all of these first-hand accounts as well, which is a problem for the narrative and its impact on the reader.

Overall, I still have a positive impression of this book. De Sena comes across as a generally good guy, if fairly intense (he describes himself that way and I don't think anyone reading this would argue with him). The tips about living a healthy lifestyle via exercise, healthy eating and mindful living are all given in a straightforward, easy-to-follow way and with very limited judgment, which is both impressive and unusual for a guy who's so intense that he founded his own series of obstacle races. For a book that doubles as promotional material for the race series, it's a surprisingly engrossing read and I recommend it. But I recommend that anything De Sena says be taken with a grain of salt.

Not too much salt, though. Everything in moderation.