Operation Pink Sky: I Jumped Out of a Plane Yesterday

June 08, 2014
Yesterday I jumped out of a plane. It already seems like a long time ago. It also sits in a weird place in my brain in that I don't think I could process it at the time and I definitely don't know how to process it afterwards. As I said in my original post about Operation Pink Sky, skydiving is not a thing that has ever interested me. But now I can see why people aren't just interested in it, but are addicted to it. It's completely exhilarating and unlike anything else I've done before.

After raising money for Operation Pink Sky over the last few weeks I rented a car via Enterprise CarShare and head over to Chicagoland Skydiving Center to get checked in and ready to jump. Before you can even watch the training videos you have to sign about ten waivers basically stating that if you die your family can't sue them. Makes sense. It's a dangerous thing and they need to cover their bases. But also a little disconcerting.

I talked to Dina and Michelle about the jump and Operation Pink Sky and whatnot and still felt pretty nervous. But then I started talking to the people who actually work at Chicagoland Skydiving Center and their faux gallows humor actually helped me relax. For example, when I first met Steve - the skydiver I would be strapped to during the tandem jump, he looked really nervously around and declared, "I have NEVER done this with someone taller than me!" For a second that made me a little concerned. And then one of the other instructors said, "He's messing with you." From that moment on I felt a lot more relaxed about the whole thing. After all, this is something that these men and women do Every. Single. Day. And multiple times a day. This isn't to say that I was no longer scared, but a lot of the tension I had been feeling quickly dissipated and I was able to joke around with them.

So we got onto the plane, where you're kind of crammed in pretty tightly. We made a number of passes for other jumpers at 5000 and 9000 feet and then headed to 14000 where we would be jumping.

After everyone else had jumped it was just me, Steve and Buzz the photographer/videographer. So we walked over to the open door of the plane, which is easily the scariest part of the whole experience, looked down for a second... 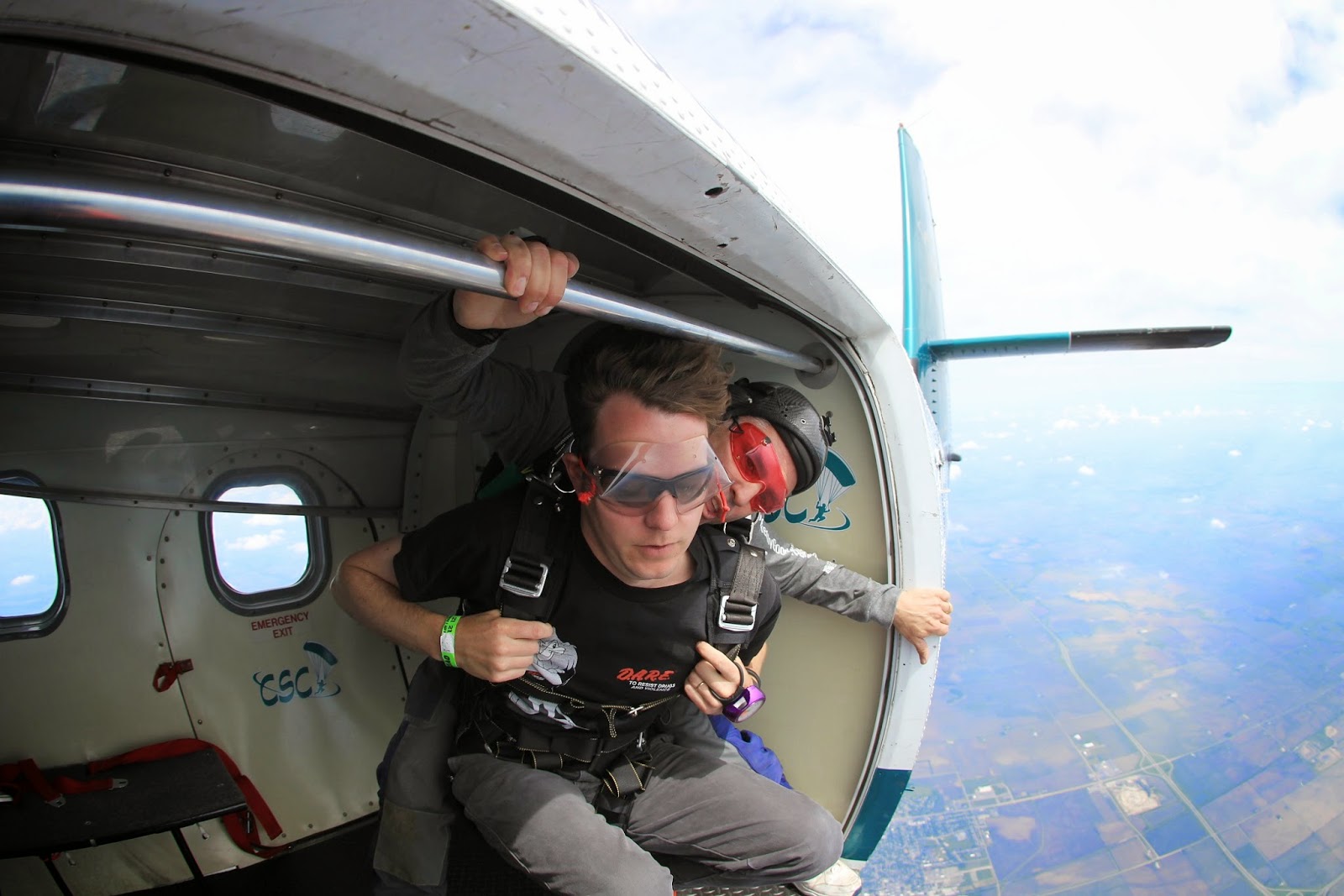 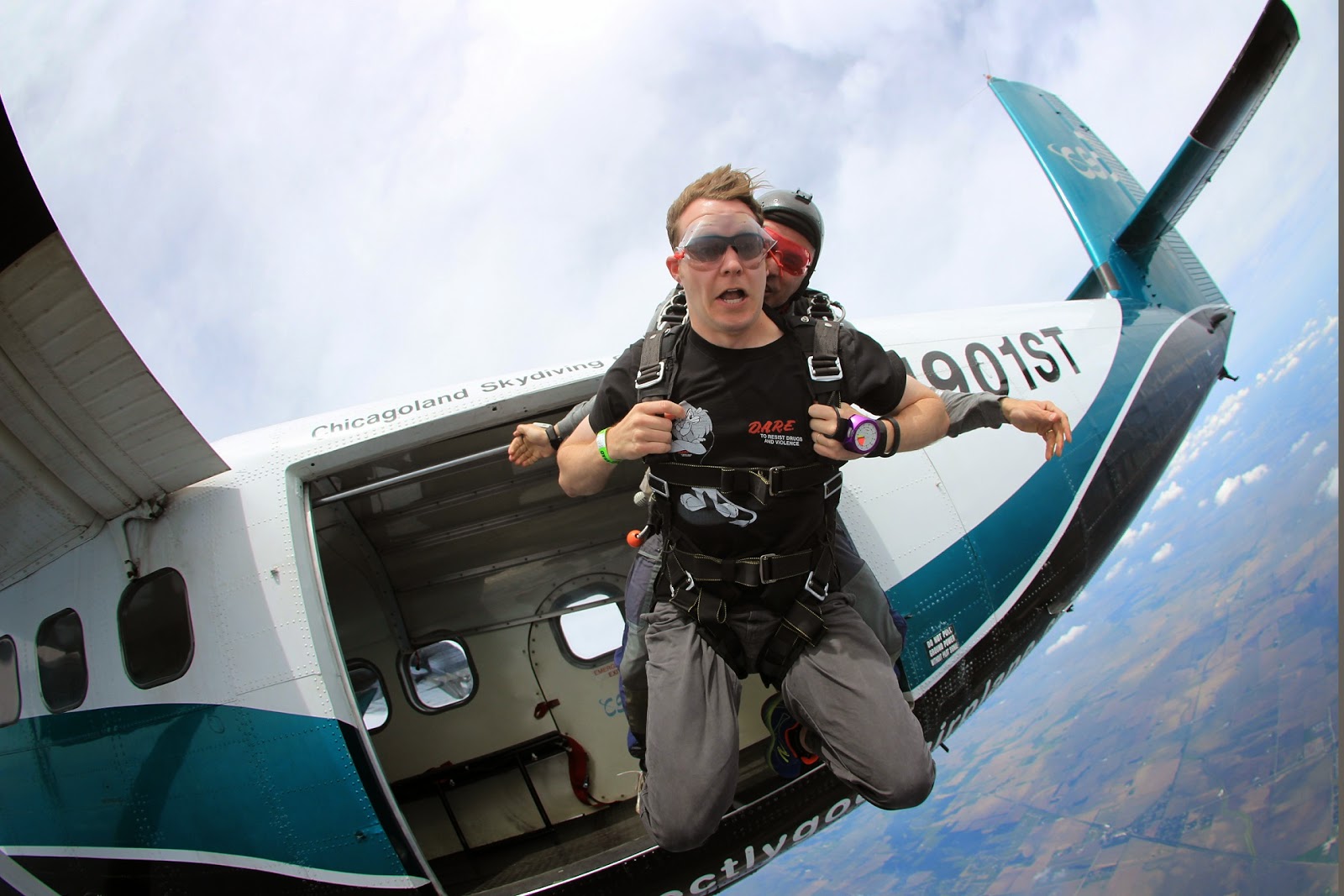 Those few moments were definitely up there in terms of the scariest moments of my life. But also some of the most amazing. 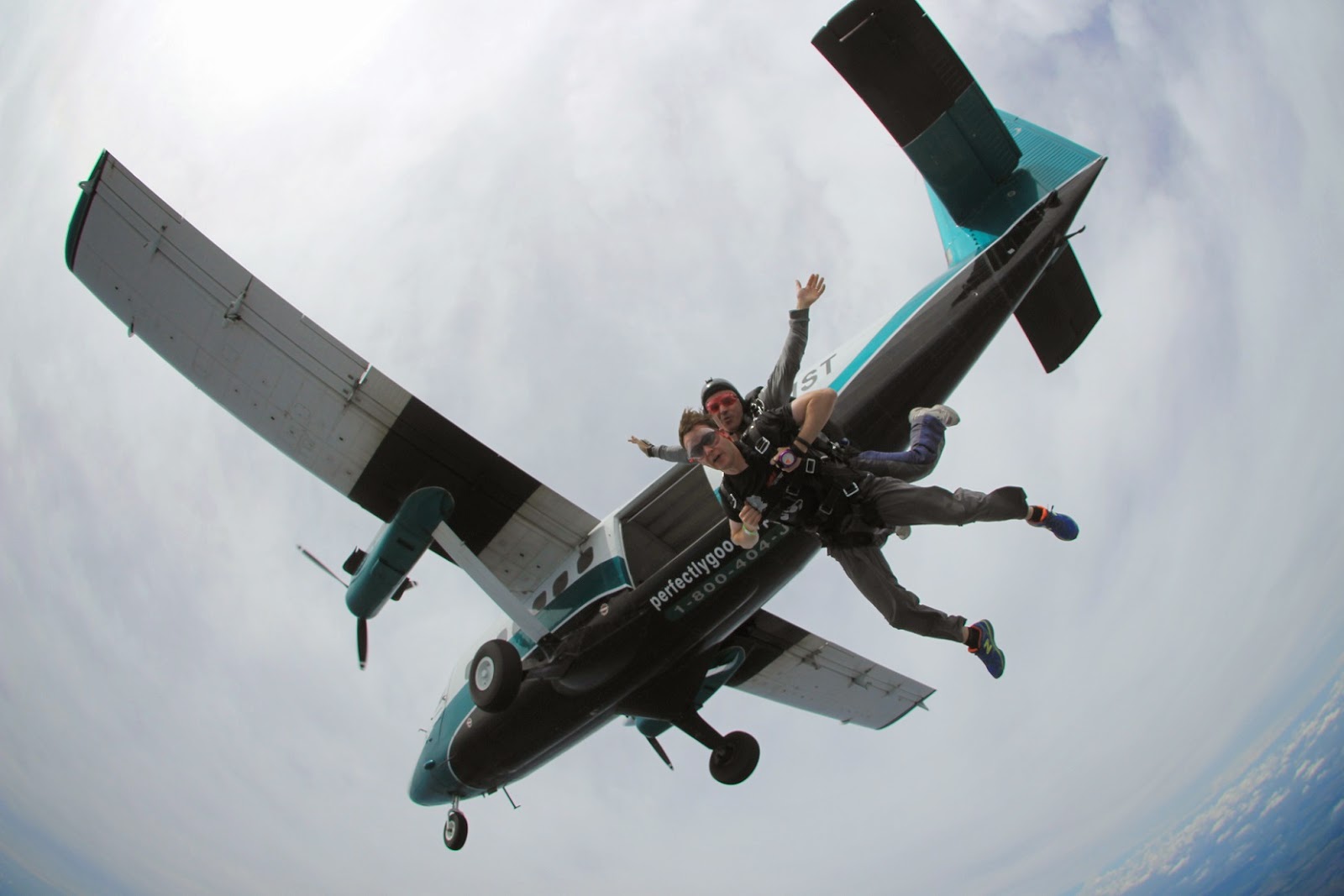 As we were falling, Buzz kept yelling at me and gesturing for me to make various gestures for the camera. But my brain wasn't really working that well so all I could really do was smile and spread my arms out to feel the air rushing by. 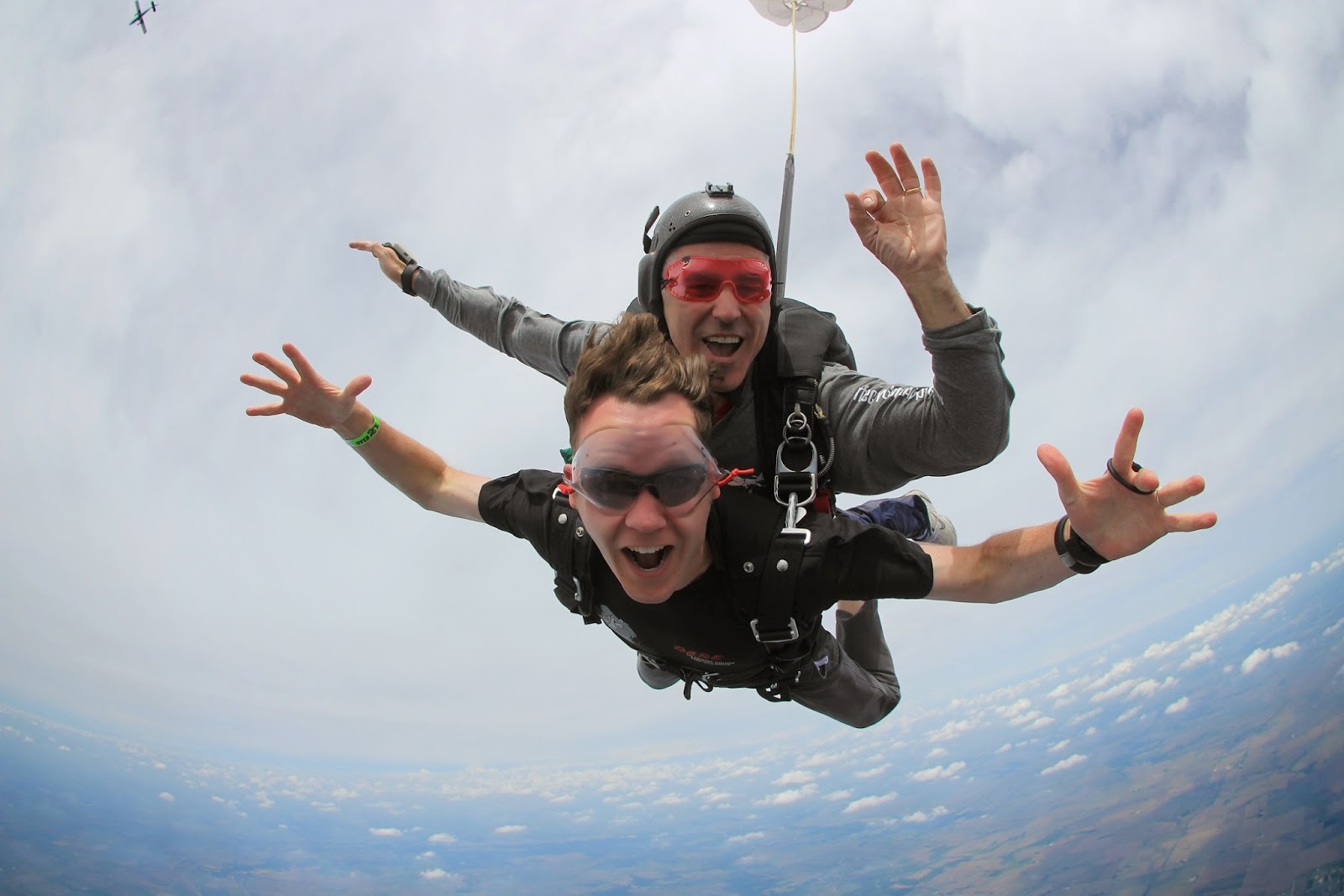 It's not really a feeling that I can accurately describe. It feels a lot more like flying than falling, if that makes any sense. The air is rushing past you and it's incredibly loud. All I could think for the majority of the 60 seconds of freefall was "AHHHHHHHHHHHHHHHHHHHHHHHHHHHH" 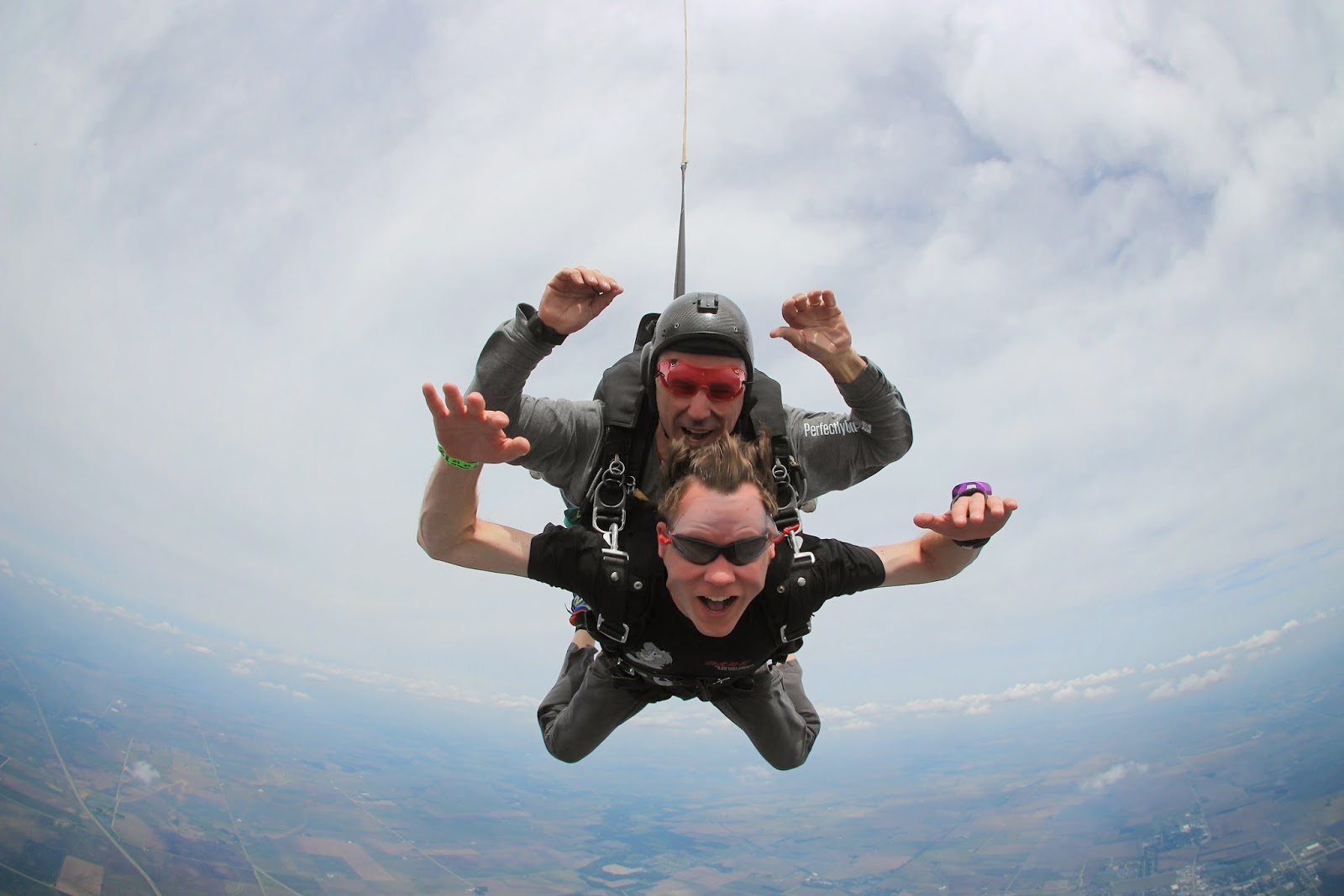 And then when you reach 6500 feet you have to keep an eye on the altimeter strapped to your hand so that you know when to pull the chute (at 5500). It's a fairly simple procedure but after falling for about 60 seconds and having my mind blown it seemed pretty complicated. Just the idea of doing something as simple as looking at a device on my wrist and pulling a cord seemed incredible. But luckily, with Steve's help, I did it and we didn't die.
Once you pull the ripcord, the parachute deploys and the freefall ends. But the experience isn't over, it's just slowed down and a lot quieter. We drifted slowly downward and Steve showed me how to control the handles of the chute to turn either left or right, which is a rather dizzying experience but very cool. I can imagine how jumping alone and floating down in solitude must be an extremely gratifying experience as you're just drifting along in the air wayyyyyyy above the ground without any of the normal sounds you're used to hearing on the ground.

We managed to land standing up, which seemed like it would be a bit difficult considering that Steve was a good deal shorter than me, but he's a pro so he made it seem easy. 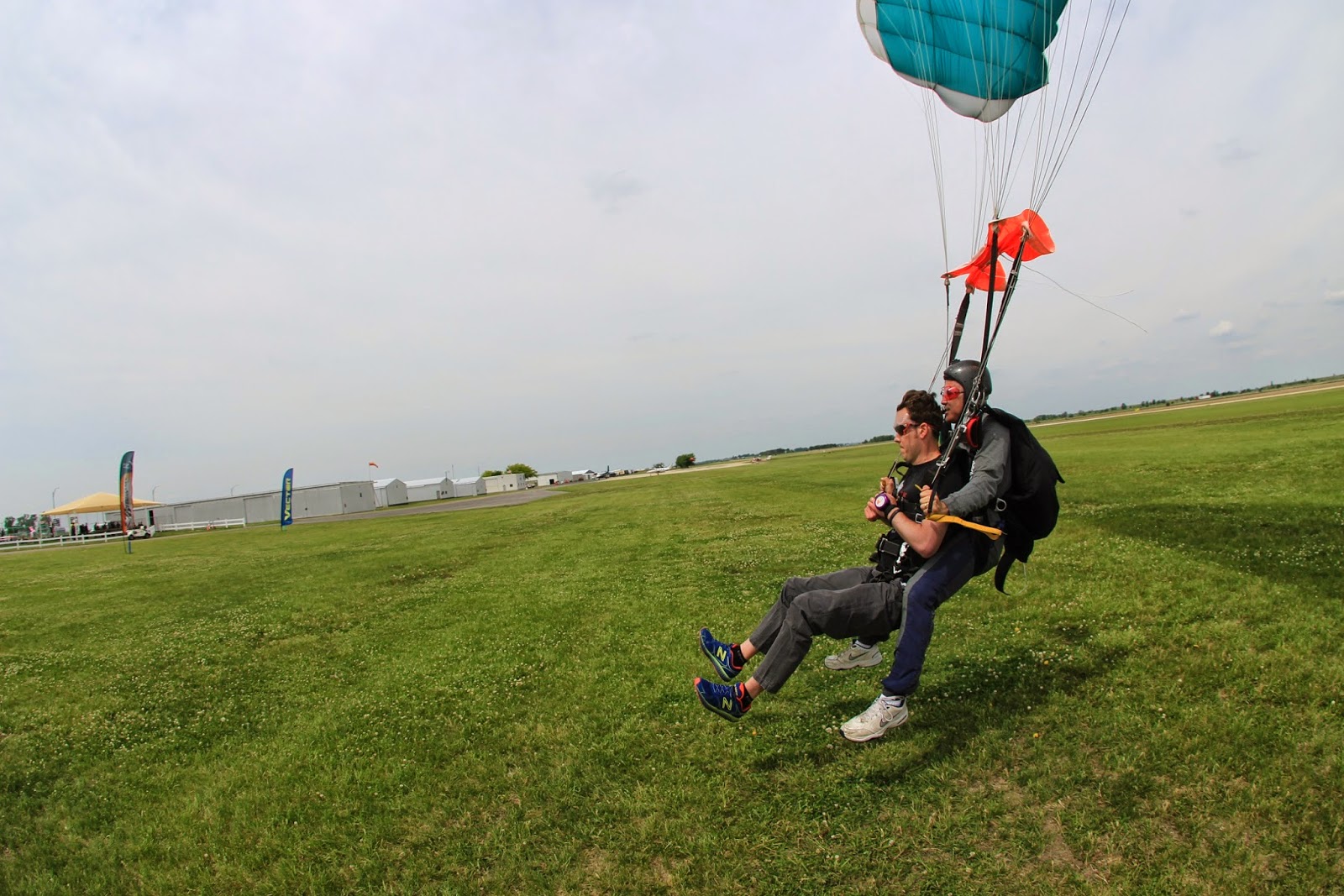 And then Buzz ran over to us to ask me what I thought of the experience and I pretty much just stared at him like using words was a weird new discovery and then said, "I don't know. That was amazing." And made the shaka symbol as if that's a normal gesture that I do and not something that I haven't done since living on Molokai in the mid-90s.
So that was my skydiving experience. Thank you so much to those who donated to Operation Pink Sky - thanks to you guys I was able to raise $625 $735 towards breast cancer research, which is very exciting! (Also, to the rest of you: my fundraising page is still open, by the way.)

One: Michelle's story for ABC7 features the scariest few seconds of my life (1:22). I do realize that that means I haven't had a very scary life (which I'm grateful for). Also, she was much better at smiling at the camera... I mainly just stared in amazement as I was falling.

Two: They were selling boobie cupcakes in the prep hangar to raise more money for Operation Pink Sky and they were amazing. So, here's my parting shot: 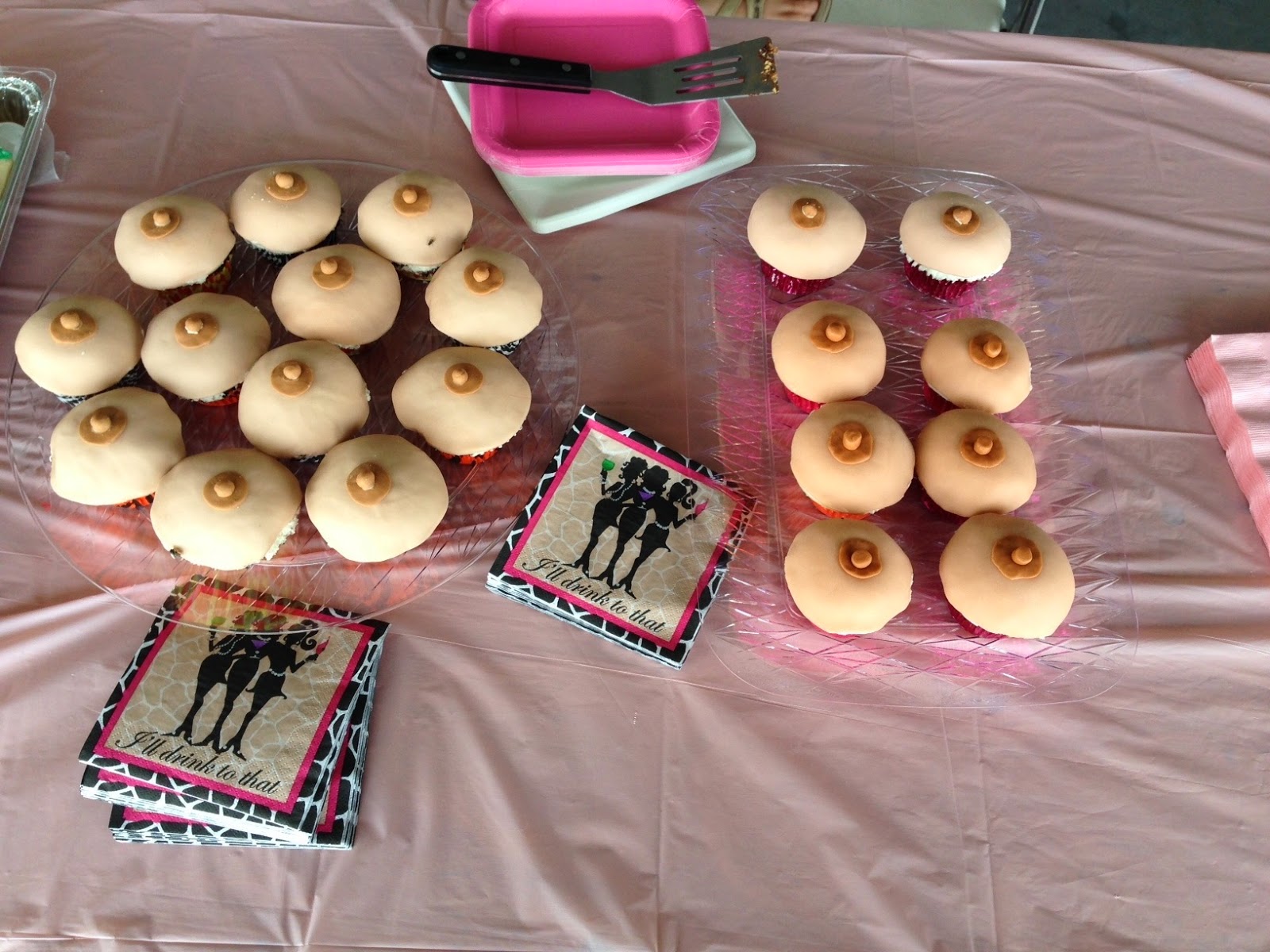