I Ran a Mile in Maggie Daley Park

That might not sound that exciting but it was part of a new race - the Run the Ribbon Mile Race - that had its first running this weekend. And while I haven't run a straight mile since high school, I had a pretty great time with this one (even if I did trail my wave by almost 20 seconds with a 6:32). As I said in my Newcity review, this is definitely a race with room to grow that should attract some attention from the running community (especially if mile races make their promised comeback).


The set-up around the ribbon was pretty cool, with runners and spectators lounging on benches and stretching out before or after their waves. There was also an announcer kicked back in a chair calling out names and placing during waves - and making some photo finishes even more exciting. Overall, it was a pretty cool set-up. Especially since the climbing wall was right in the middle of everything. It felt like running around a giant outdoor play area... which I guess is what Maggie Daley Park is really.

And running five laps made it even more entertaining - as you could see the other runners in your wave through the climbing walls as they circled the track as well. The start/finish line was positioned near the only building in the area, providing an obvious base camp and spot to spectate the finishes. 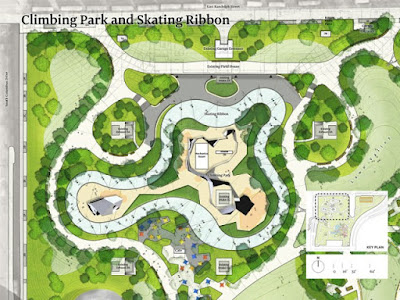 So here's my complaint about wave organization, which is at the end since it has nothing to do with my enjoyment of the actual running itself and is really my fault for initially over-estimating how fast I could run a mile):

After I got the first informational email from race organizers and saw that my selected pace group (5:31-6:00) was only a step above the "elite" group, I realized I'd made a huge mistake. I emailed race directors and asked if I could move down a wave to a slower pace and they said no problem. From the email: "You can definitely switch waves... You'll just have to line up with the wave you want to race in." Whew.

Unfortunately, on race day when I picked up my bib and event shirt - a pretty sweet soft cotton tee - I asked about moving to an earlier wave and was told it was too late to do that on race day. I mentioned the email exchange and the volunteer sighed and essentially told me that if I wanted to ruin the scheduling for everyone else I could go ahead and switch waves, but that assignments had already been made and this would really slow things down. So I decided to just stick it out and run with my original wave - Wave 10.

But when it came time for Wave 10 to line up, the volunteer setting up waves barked at me that I was in the wrong wave and needed to get off the course. Apparently I was in Wave 12 now. Another runner who was initially in Wave 10 with me got the same instruction as well. When I said I was definitely in Wave 10 according to the roster and asked if it changed she said, "There's only ever been one roster!" (I just double-checked my email and I'm definitely in Wave 10 in the original roster.)

I was hoping to move up so as not to relive my high school track experience of being last in the mile... but that didn't work out. I'm not sure why it was such a big deal that I not move up since the whole atmosphere seemed pretty laid back otherwise - all finishers were awarded a green PARTICIPANT ribbon in classic track meet style. It may have just been those few volunteers not understanding the system but it put an annoying damper on an otherwise smoothly run (and fun) event.

I still think I'll run next year. I'll just actually know which group to put myself in this time.