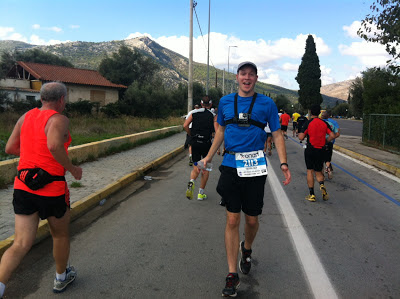 On November 11th, Brynn and I ran the 30th Anniversary Athens Classic Marathon, starting in Marathon and following the official marathon course (marked with official historical signs) back to downtown Athens and the incredible Panathinaiko.

My Newcity review covers the race itself, but I wanted to talk more about getting to the race and around Athens for anyone who may want to take on this race in the future.

We left Chicago Thursday night and got to Athens on Friday around 9pm (there's an 8 hour time difference between Chicago and Greece). We flew Turkish Airlines from Chicago to Istanbul and then after a short layover in the massive Istanbul Ataturk Airport got on a shorter flight from Istanbul to Athens (also Turkish Airlines). And for the record, Turkish Airlines earned their "Best Airline in Europe" recognition, with comfortable seats and free hot meals even on the shorter flights.

On our second flight we started talking to a policeman from Athens who gave us some tips for getting around the city and once we landed showed us where we could catch the Metro... unfortunately the Metro drivers were still on strike (in case you haven't heard, lots of striking and protesting in Athens). Luckily, our new friend showed us the X95 express bus (5 euro a person) which took us directly to Syntagma Square, near where our hotel was so we didn't have to shell out the Euro for a cab. The bus was pretty much a direct shot with only a few other stops and since Syntagma Square was the last stop we didn't have to keep track of where to get off.

On Saturday we checked out Athens and went to the expo and packet pick-up at Zappeion Conference and Exhibition Center. It's a beautiful marble building in the middle of the National Gardens, but aside from that, it made for a good expo building just because it's circular. So to get through all the vendor booths you could just follow the circle through the building and you'd eventually end up back in the entryway. Because of all the international runners almost everything was in both Greek and English, which made it easy enough for us to collect our packets, race shirts and train passes. We also found out the locations for the shuttles the next morning. 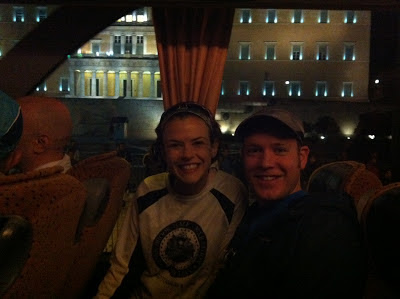 Because of the time difference we both woke up around 2am and then couldn't get back to sleep... so the 5:30 alarm wasn't really necessary. We headed to Syntagma Square and caught a shuttle in front of the Parliament building (side note: later Sunday night when I couldn't sleep I went walking around and saw a silent protest here with maybe 50 protesters and around 100 riot police). These shuttles were the fancy kind that are used for tourist sight-seeing trips, not just the regular school buses we're used to for most point-to-point races we've done. But the comfortable seats were quite welcome since it was a pretty lengthy drive from Athens to Marathon.

It was somewhere in the mid-40s when we got to the starting line with a few hours of waiting before start time (9am). They were passing out plastic bags for people to wear for some reason. Brynn grabbed a few of those and then tried to warm up: 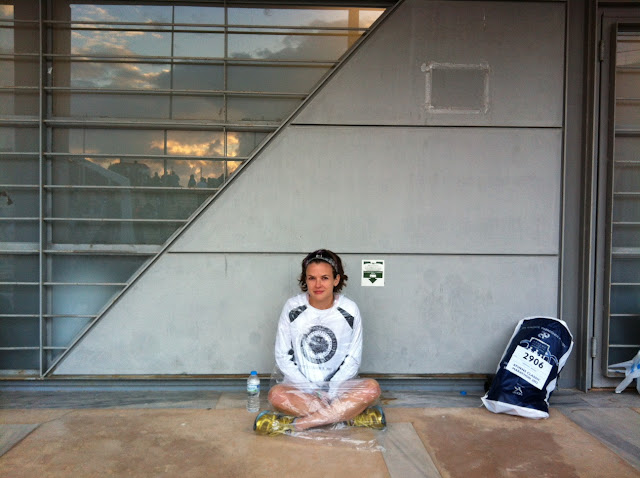 We waited in line for a little while but eventually we got to get right up next to the official Marathon Flame to warm up a little more: 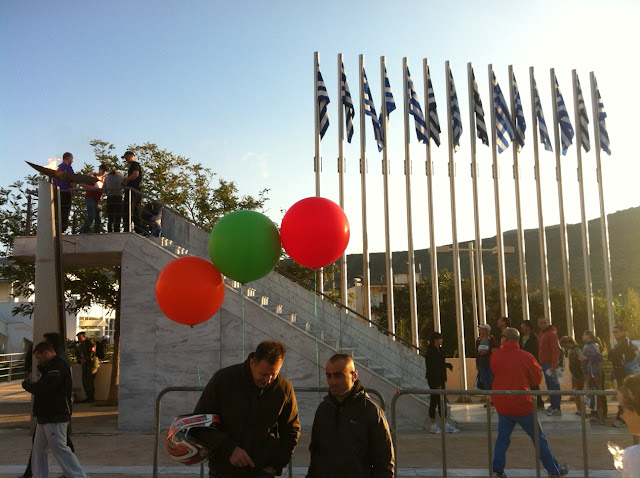 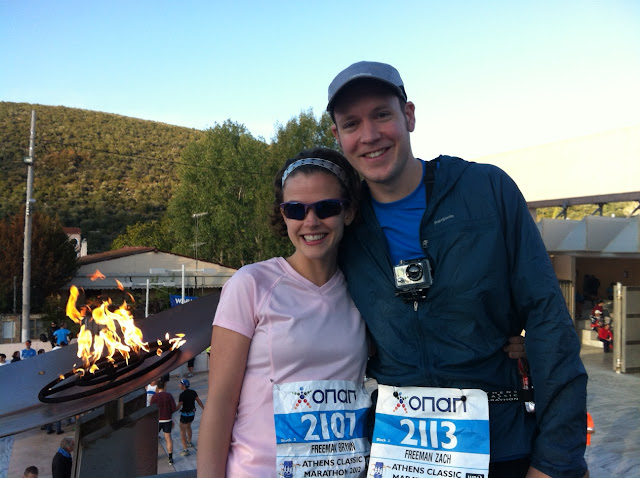 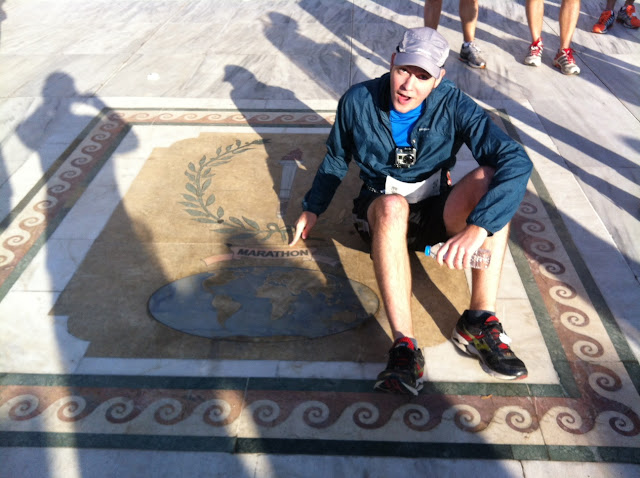 Because of our race times from previous marathons we were in Block 3 (out of 7), which meant that we started 3 minutes after the initial start of Block 1. (It also meant that people passed us throughout the entire race because we definitely weren't running as fast as the rest of Block 3). Here are some shots from the starting line, including the giant crane that was filming the start of the race as well as the fireworks that helped kick things off: 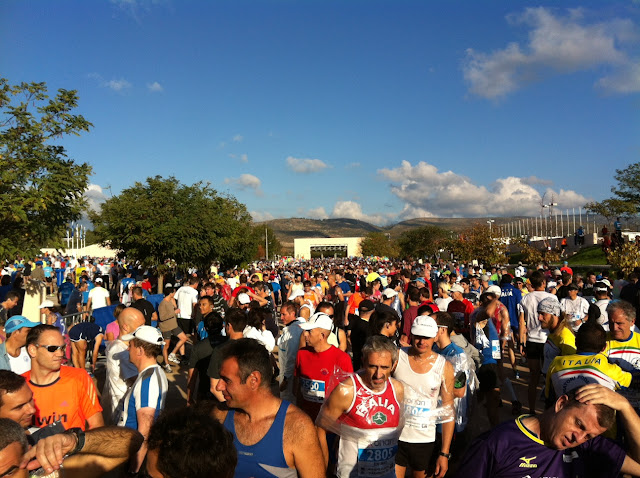 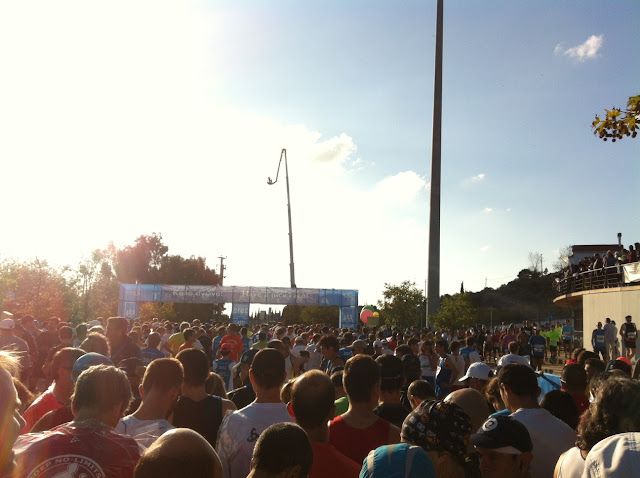 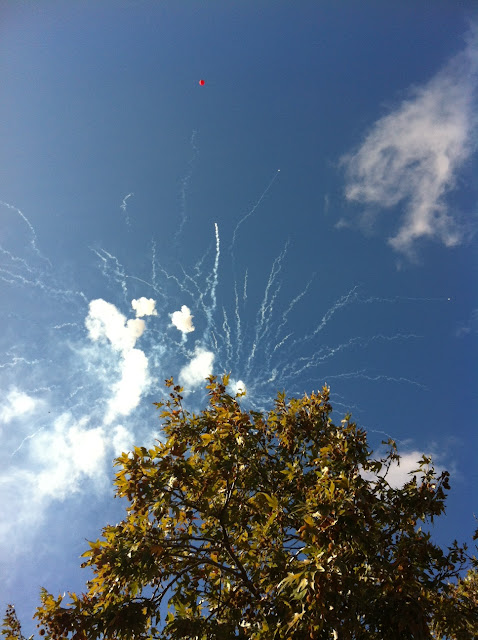 Before the race got started all the runners were asked to raise their right arm and then recite the runner's oath... I really wish I would have recorded it or could at least remember some of it. I can't seem to find it anywhere online but I really liked it. It was something about honoring the run and the other runners (blah, blah, blah), but it made the run seem especially important and whatnot. If anyone knows it I'd love to hear it... it's not this lame jokey one that keeps coming up... it's legit.

Anyway, here are some pics from the race itself.


So, to sum it up, I can't really recommend this race highly enough. It was amazing from start to finish and the historicality (new word) of it all just adds an additional layer of awesomeness to the whole thing. If you're looking for a destination marathon and don't mind dealing with some jet lag while you're running, this is an amazing experience. 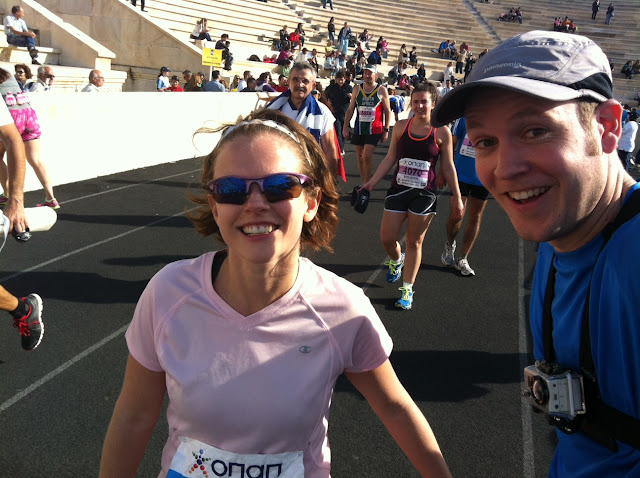 We stayed in Greece for another week after the marathon, mostly in Athens but we also took a ferry to Santorini for a few days. From past experiences with destination marathons we've found that it's better to get the race over at the start so you can enjoy the rest of your trip without having to worry about being ready to run at some point. 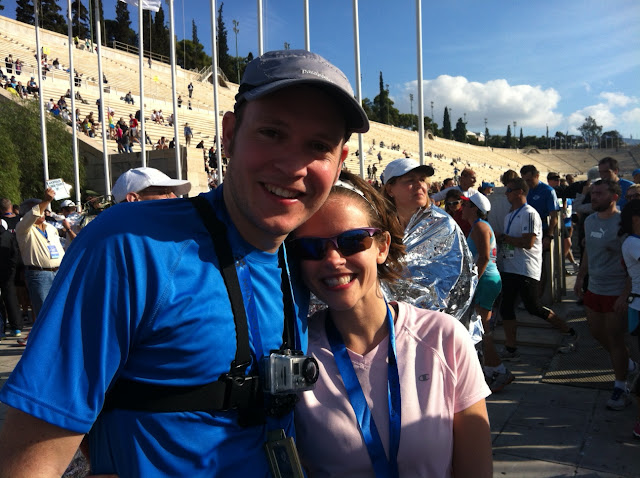