Hot Chocolate 15K (and the docility of runners)

November 05, 2012
You've probably already read at least a little bit about the Hot Chocolate 15/5K. And most of what I have to say I have already included in my Newcity review.

And others have made it pretty clear how they feel on RAM Racing's Facebook page and on Yelp.

But despite all the complaints about the extremely long waits for packet pick-up (and the subsequent, slightly less-legitimate complaints about the race itself), something I haven't seen mentioned too much (and something I think RAM should, ultimately, be thankful for) is the incredible patience and docility of runners. Seriously. Look at this picture. And think about it. This is a picture of thousands of people on a Friday afternoon in 40-degree weather standing for several hours in a parking lot in a line snaking around and around a giant tent... not waiting for gas (like many people on the East Coast this week) or waiting for food (like many less fortunate must)... but waiting to pick up a bag that has a sporty sweatshirt and a race number in it. A bag that they paid between $50 and $70 for.


And while PLENTY of people have very vociferously voiced their complaints on the internet (as evidenced by the Yelp and Facebook links above), I hardly heard a peep out of these people as I waited in line with them. In fact, most of them were laughing, joking and just enjoying the absurdity of the situation. At least that's what the people around me were doing. Occasionally someone might say something like, "Well, THIS is just riDICulous!" but then they would laugh at themselves for continuing to wait in the line and turn back to the person next to them and talk about how much better it was last year... or some other run. And when volunteers came around and passed out tiny chocolate squares we each politely took only one and quietly said thank you.

The closest thing I saw to a truly angry outburst was when a volunteer came around collecting money for parking and the woman in front of me said in a carefully controlled voice, "I just waited for TWO HOURS in this line and you can't even comp my $5 parking?!?! Are you fucking KIDDING ME?!" And even though all of us around her were completely on her side, we all looked in different directions and waited for an awkward few seconds... and then she said... "I'm sorry. I'm just frustrated." and paid for the parking.

So, congratulations runners. Even when we're getting very poor service, even when we're over-paying for something and then standing around in the cold waiting to get that thing, even then we are (mostly) able to maintain our composure and just laugh it off. So good job. And for those of you that were lucky enough to arrive at some key moment that allowed you to get in and out of that expo in under 20 minutes, you saved a lot of time, but you totally missed the chance to stand around with a lot of other people silently wondering to themselves just how much of a pushover they really were... and finding out. 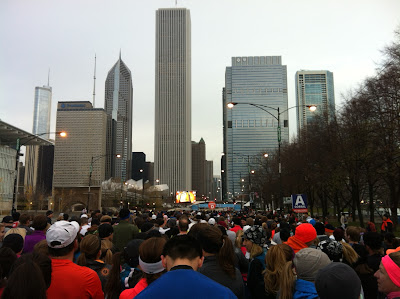 Anyway, I didn't think race day was as bad as some people have claimed (though we were in Corral D so that's just a 10:30 minute wait rather than over an hour) but it also wasn't as awesome as the marketing promised. But that's what marketing's for right?

The corrals weren't as packed as I expected them to be, and they also weren't as policed as I expected them to be (actually they weren't policed at all). For us that worked out well since I was supposed to be in Corral B and Brynn was supposed to be in Corral G. We just met in the middle. I do think the corral assignments were pretty random. I was actually originally assigned to Corral T but emailed RAM before the race to get moved up. I'm not a speed demon or anything but I'm definitely quicker than second-to-last corral. 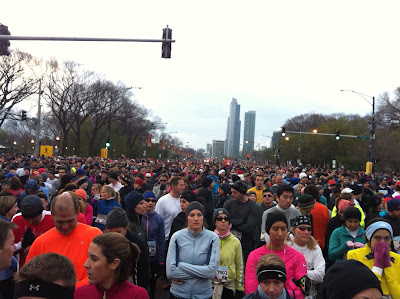 I imagine the 3.5 minutes between corral starts was pretty lame for anyone after I (waiting more than 30 minutes at the starting line for any race just seems terrible) but it did keep the course from ever feeling overcrowded, even on the Lakefront Trail on the way back north. There wasn't too much that was special about this course, though as someone who runs through Chicago a lot that didn't bother me too much. The route seemed a little strange but I kind of enjoyed it. It does seem to me, though that this race is promoted as a "big deal" and a lot of people come in from the suburbs to run it. If I came in from the suburbs and ended up running on the west side of Lakeshore Drive in empty parking lots I probably wouldn't be too happy either. But for a race with 40,000 people, I thought the course worked out nicely and was very well supported. 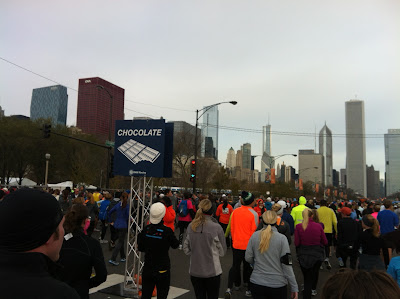 Anyway, the weather was nice (for a November run) the course wasn't too crowded (though some corral wrangling - or even just more qualifying for corrals probably would have helped) and the chocolate was sweet.

Brynn and I got some practice in running in an official race together before Athens next weekend - really, we're just proud to have run 9 miles together and not argued once, though she did let me know that after 6 miles none of my jokes were as hilarious as I thought they were. That's probably helpful information to remember.

In closing, this race was kind of like this plastic mug: not quite as substantial as I expected, but sweet enough that it's worth checking out once and getting everything you can out of. 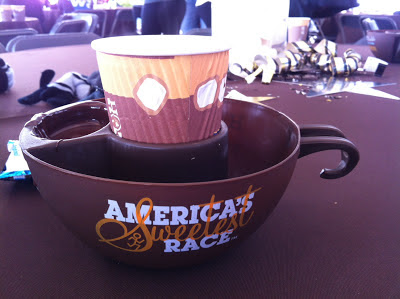