November 01, 2012
Warning - this entire thing is just me complaining about someone else complaining...

Just reading The New York Times this morning and on the front of the Style section I see they have something about running, or race photos to be more specific:


In Shape, but Out of Focus 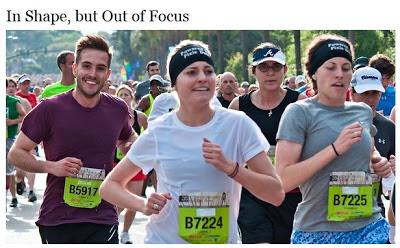 The subtitle (in the print version) is: "Race photographs are meant to immortalize your moment of triumph. Instead, they often catch you at your absolute worst." and it's got that oh-so-funny picture of the "Ridiculously Photogenic Guy."

Sweet, I think. A hilarious send-up of the unflattering photos that you usually get to skim through after completing any major race (and even a lot of 5Ks these days). I bet this will be filled with runner-themed comedy!

But, no... and I should have known better. This is in the Style section after all. This article is actually not hilarious at all (though I think the writer, and maybe some others, might see it that way). To me, though, it is a puff piece filled with things I hate:
Is your soul really destroyed from seeing yourself in an unflattering picture? Maybe if you didn't finish the race and on top of that you've got a terrible picture it might hurt your soul a little, but I think a terrible picture is more hilarious than humiliating.
Your privacy is violated? Why is it a secret what pace you ran? Or what you looked like when you ran it? Maybe you don't want to go telling everyone your time, but if you're not lying about it why does it matter? Should races seriously make this data private so that you have to jump through hoops just to view your finishing time? Plus most images require a bib number - you would really need to be a stalker to find your running photos.
If you're wasting energy on this debate you are not focusing on running the race. I've definitely posed for some of these and totally ignored others. But my brain wasn't traumatized and my time destroyed by making the decision of what to do.
I have a feeling Kristin Mayer is the kind of person that puts on makeup and styles her hair before she goes to the gym. Most women I know are running to get/stay in shape or because they love it (or, more often, both), not because they think they look amazing when they're doing it. It's weird to care more about how you look running than about actually running.
Sure these are both great suggestions for getting great race shots... but WHY are you (the supposed reader of this article) so worried about getting great race shots? That is the last thing I'm worried about when I'm running. The point isn't that I should LOOK great (in real life, much less in a photo), the point is that I should FEEL great and RUN great. Also, I think your actual performance should say "I'm an athlete" way more than your clothes.

The only redeeming line in this whole piece is at the very end when Sean Walkinshaw, the director of business development at Brightroom says "People always say, 'Jeez, Brightroom, you always get me at my worst, and I always want to say: 'That's the way you're running. You've probably never seen yourself run before.'"

Exactly. You probably don't look great when you run, and neither do I - because hardly anyone does. You're basically in the middle of a workout. You know why people look awesome in Runner's World or in Brooks ads? Because those photos were professionally taken during a photo shoot and not snapped in during a grueling marathon! Runners, you have enough to think about in making sure you get across the finish line, don't start stressing over whether your race photos are "good enough" as well.

And don't let the Style section of the NYT tell you otherwise!