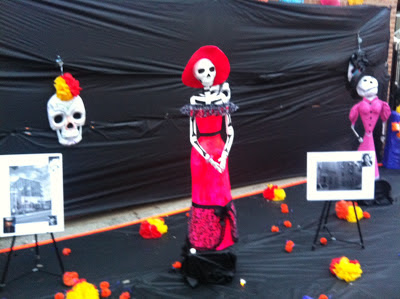 When we signed up for this race I had a feeling it was going to be a good one just based on the website. Carrera de los Muertos?! Race of the Dead?! Sounds sweet right?

And it definitely was. Check out my Newcity review for more of a breakdown on that front.

There were a ton of great costumes (mostly skull-face painting) and the base camp was in the parking lot of an UNO Charter School in Pilsen, with sweet decorations, music and food for sale. Lots of partying going on for such an early morning on a cold November day.


Also Southpaw from the White Sox was there, along with Hubert, the lion mascot from BMO Harris Bank. I'd never heard of him before but now I'm mascot-educated. So: BMO Harris Bank has a mascot... and that mascot is a big orange lion named Hubert. And he's friends with Southpaw. 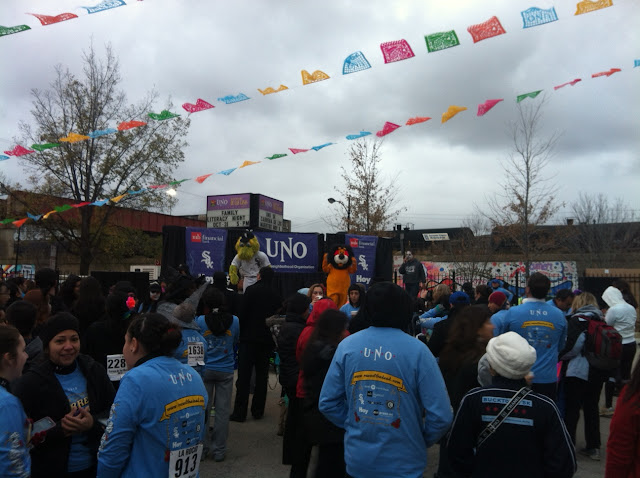 There were about 3000 people who showed up to run the race and the starting area (a blocked off section of 16th street) had plenty of space for everyone to spread out. They did leave a huge chunk for 6-minute milers and another huge chunk for 7 minute milers which seemed a little excessive, and led to tons of people crowding into the 6 minute section and then a big break between 6 and 7... I guess if you're going to exaggerate your estimated pace, you go big.

It was pretty chilly this morning so both Brynn and I had quite a bit of cold-weather gear on. More than most other people there and I really don't know how people ran with just the long-sleeve race shirts on (which are pretty sweet, as you can see) because I kept my gloves, jacket and hat on the entire time. 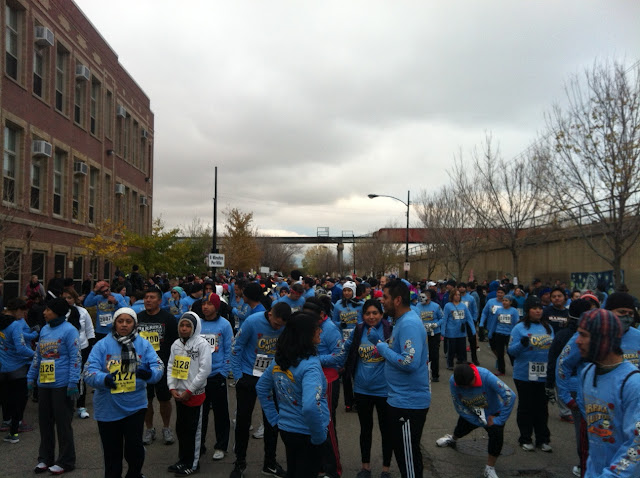 The course wound through Pilsen and stayed completely on blocked off streets, which was really nice. There were a few dance/musical acts that I wanted to stop and check out but my competitiveness got the better of me and I kept going. I haven't run a 5K in a while so I didn't know what my pace would be but I was pretty happy to end up with a 22:32. 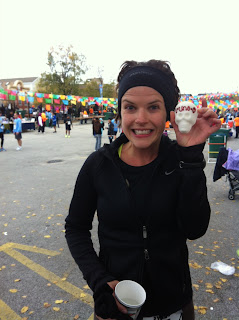 Side note (and also warning that this is gross) - as I was nearing the finish line, I noticed that the woman running in front of me had a big brown stain on the back of her running tights. I've heard of this happening but I've been in a lot of races and never seen this before in real life. She really, seriously, actually shat (which is a great past-tense word) her pants... so... I can check that off of my list of Things I've Seen At a Race. I wanted to be like, "It's not worth it lady. You should have just stopped and found a bathroom." And she did run to a port-a-pottie right after finishing.

Anyway, on that happy note, at the finish line instead of handing out medals (which some 5Ks have started doing) there were several boxes of sugar skulls. I'm not sure what to do with these - maybe it has something to do with Day of the Dead that I'm not familiar with - but they look super cool.

They also had lots of food and drinks for sale for pretty cheap, though you couldn't pay with cash. You had to go trade in dollars for Carrera Cash, which I actually kind of liked because the Carrera Cash was really well-designed.

Make it rain with Carrera Cash: 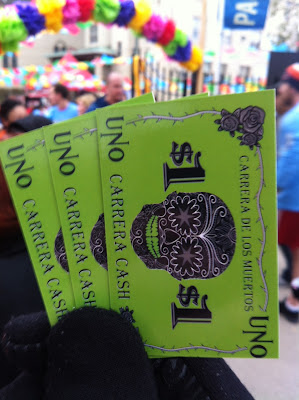 So, next Day of the Dead, if you're looking for a race to check out, this one is pretty excellent. Great theme, great neighborhood, great community vibe. But make sure you use the port-a-pottie BEFORE the race and study up on your corporate mascots beforehand.

In closing, you should also know that there was a giant Hulk statue: 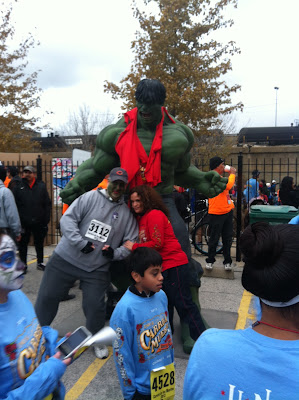