Since I'm in Boston this week visiting Brynn I figured we should be hitting up some of the Boston-area races (especially since neither of us is fast enough to run the Boston Marathon). So, in searching for the most convenient race for us to take on this weekend I stumbled upon the Doyle's Emerald Necklace Road Race - a race now in its 18th year and deemed "legendary" by race organizers. It didn't hurt that this race started at 11am and that the weather was predicted to be sunny and in the mid-60s.

Unfortunately, Boston chose not to cooperate and the weather was in the mid-50s and raining yesterday morning as Brynn and I made our way to the starting line (via bike - her on her own bike and me on a Hubway - the Boston equivalent of Divvy).

We got to what we thought was the starting line at Doyle's Cafe - a small pub/cafe in Jamaica Plain - and checked in to get our race bibs. Here we found out a few things: 1. This race is much bigger than we anticipated (around 1500 people), 2. There was no gear check and 3. The starting line is not in the same place as the basecamp/packet pick-up/finish line. So, we started walking towards the starting line. 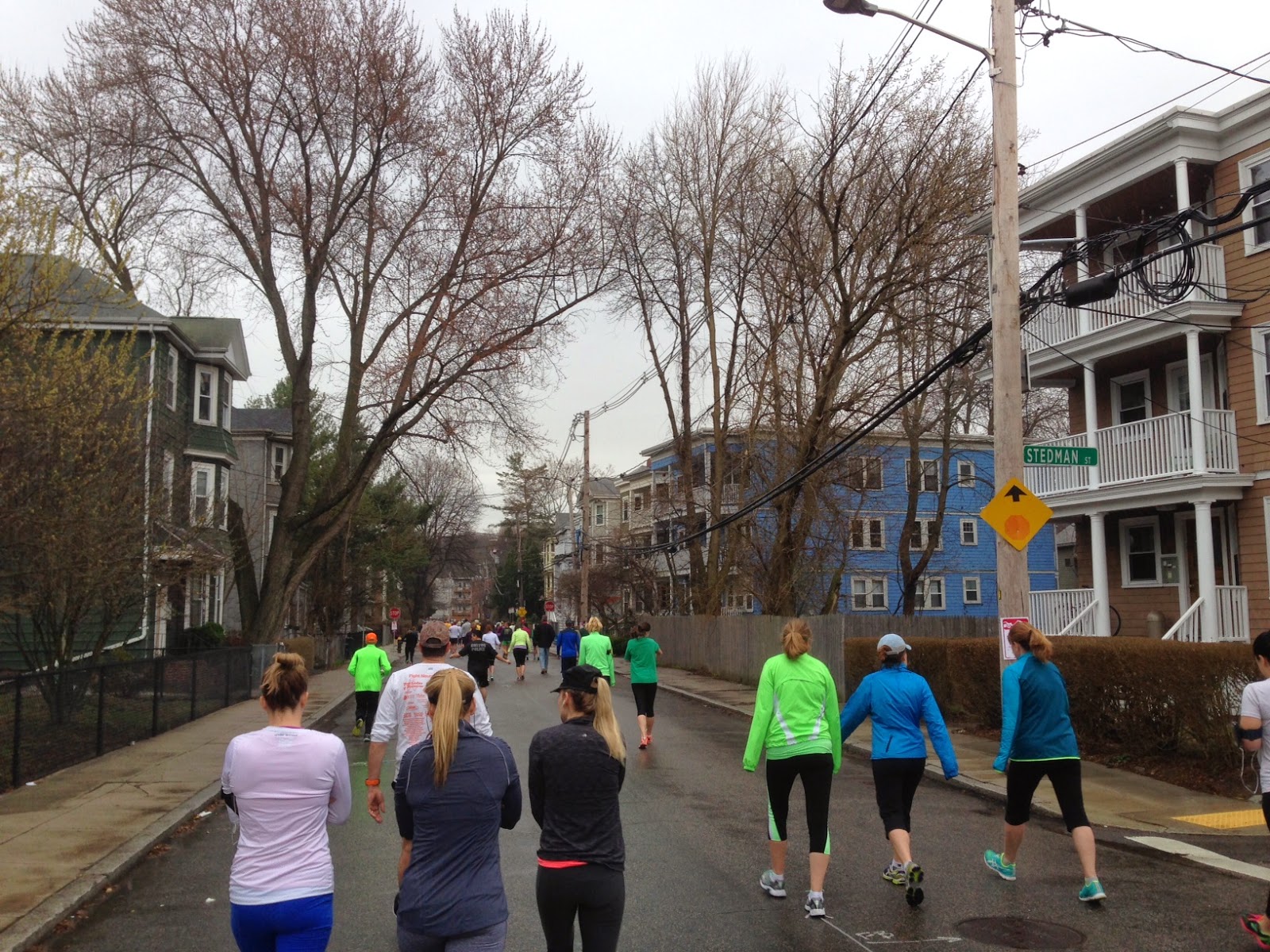 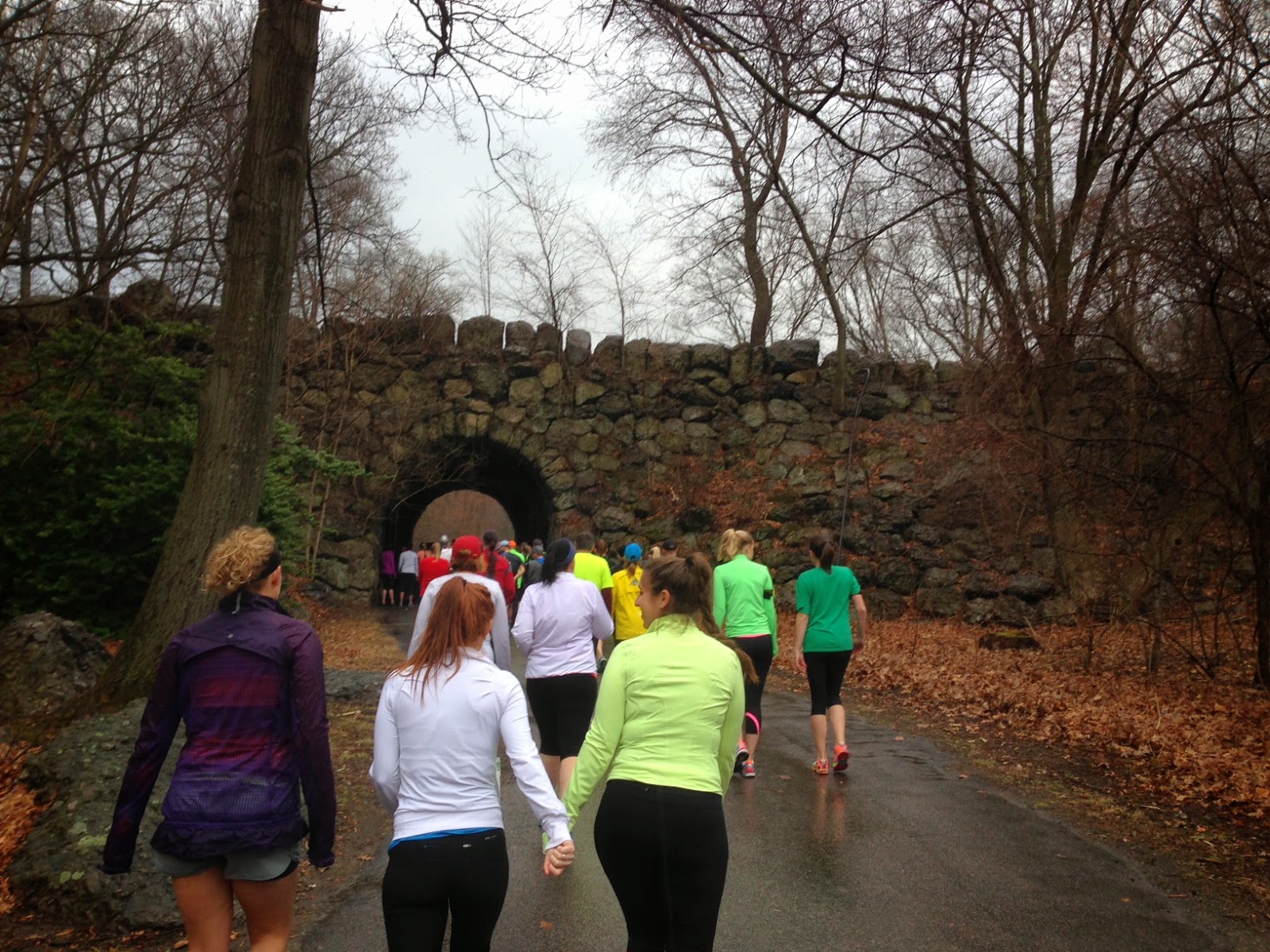 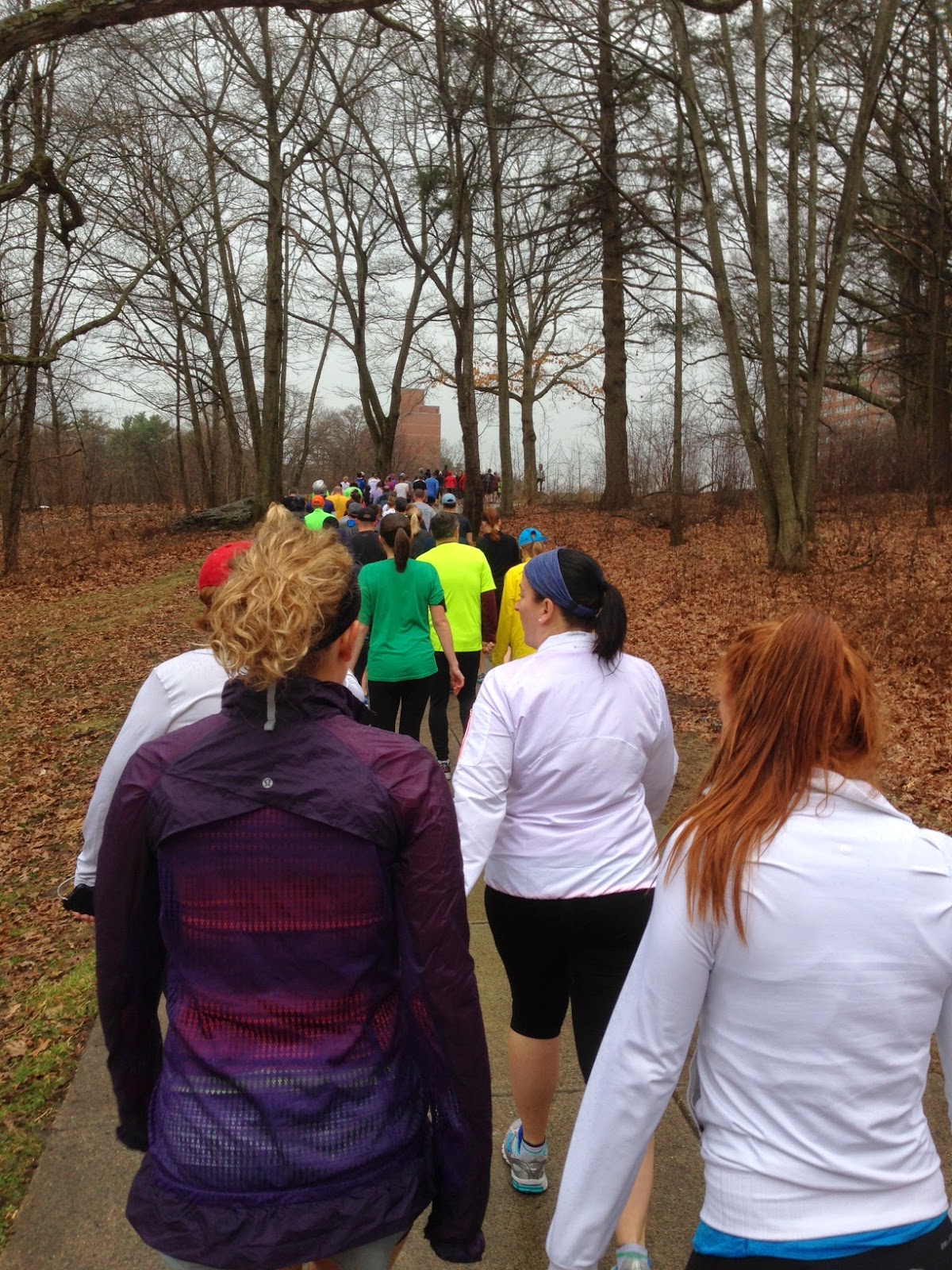 And after probably a half or 3/4 mile we reached the starting line: 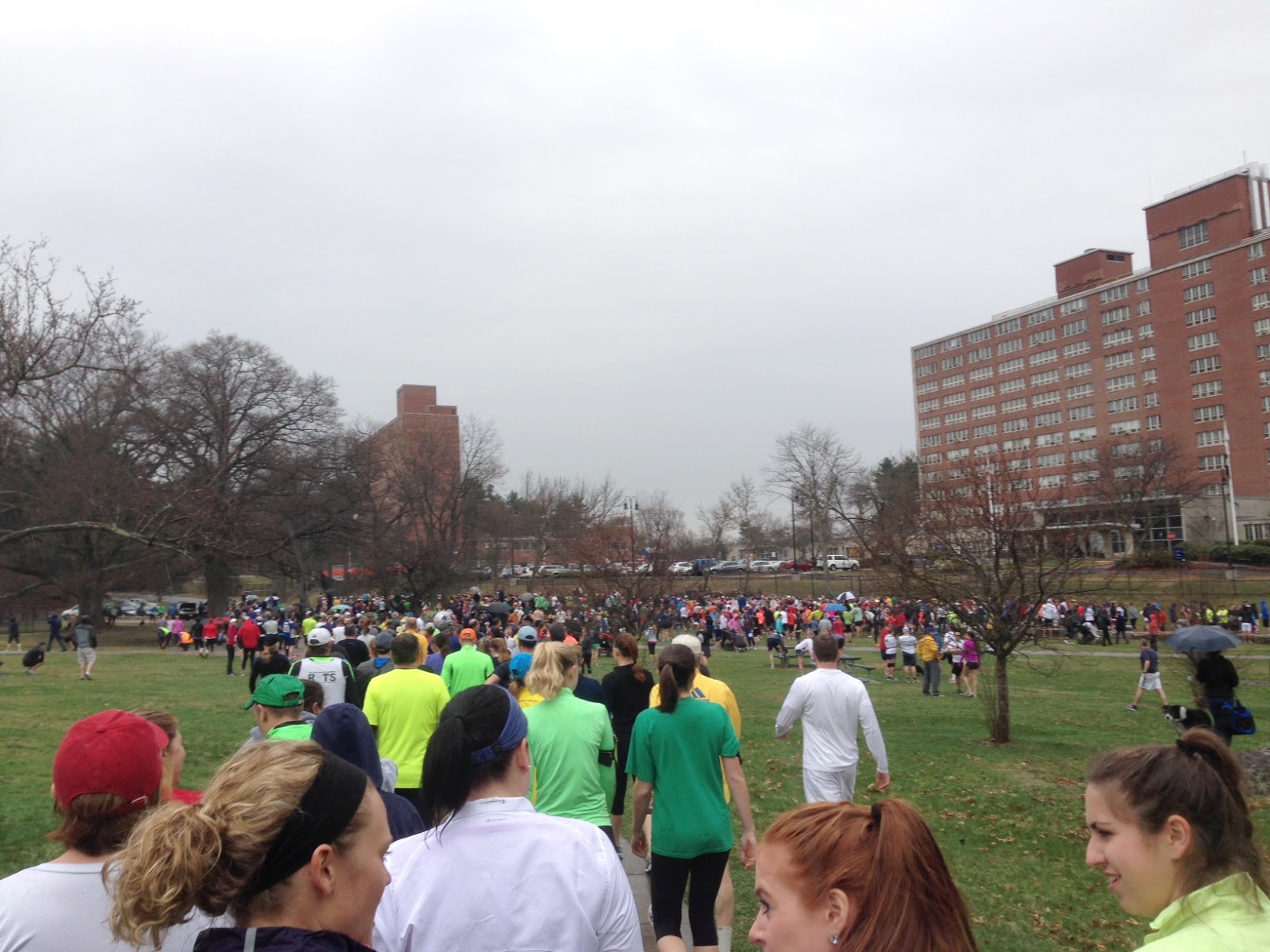 Though the race was scheduled to start at 11 - it was around 11:10 when the National Anthem kicked off and runners really got set to take off. As I said before we were surprised at the number of runners lined up at the starting line - especially given the rather crummy weather. Still, runners didn't seem especially excited to start running. A woman behind us laughed when the race announcer declared the race to be the "legendary" Doyle's Road Race. And from the starting line, standing in the rain, it definitely seemed a bit less than legendary.

But once the race got going, making its way through the rolling hills of Franklin Park, we could see why it's considered a Boston stalwart and why so many people showed up to run on such a bad-weather day. The course was beautiful and even with the rain it was a great experience.

So we ran  through the rain 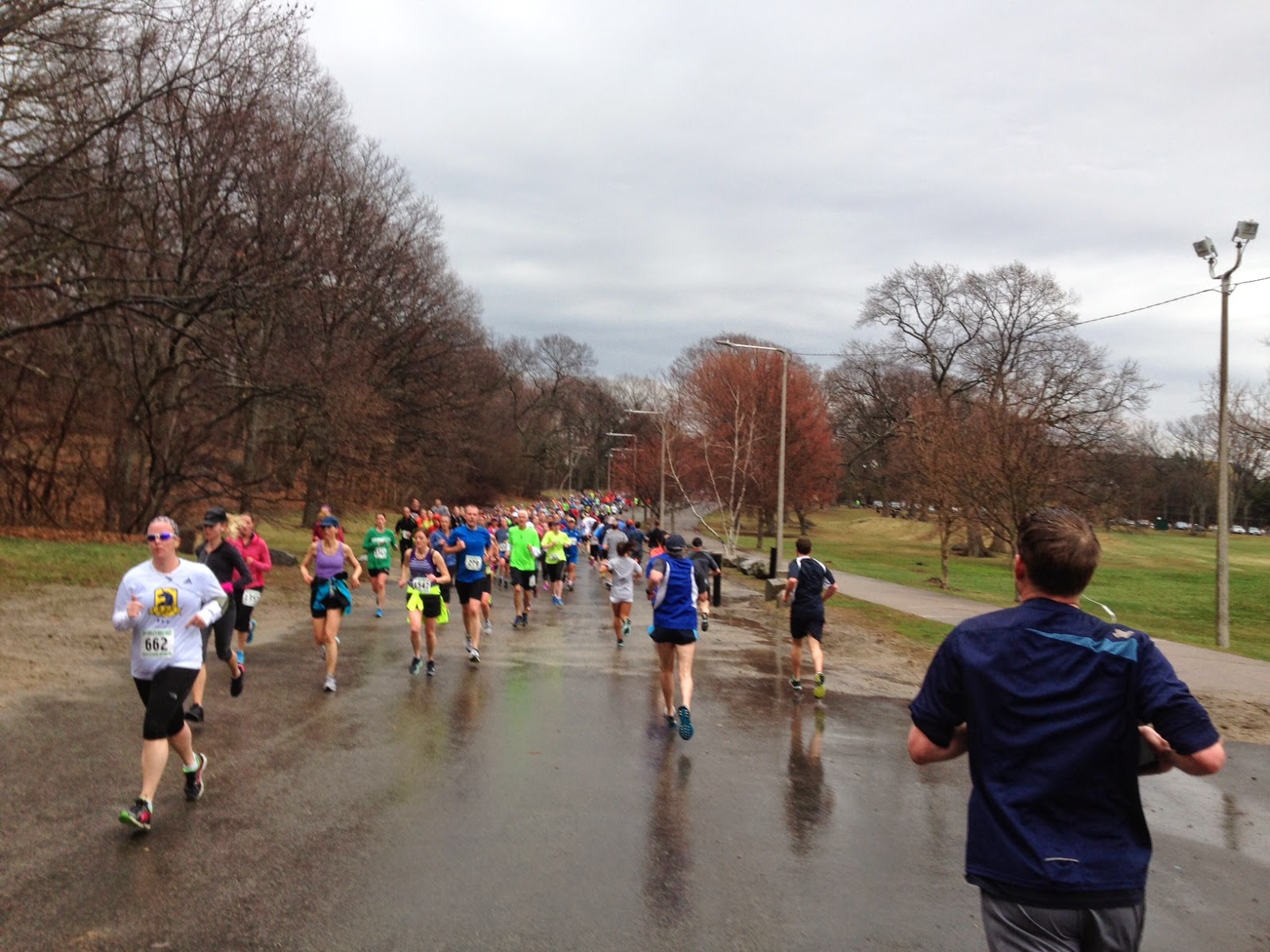 Over bridges and whatnot: 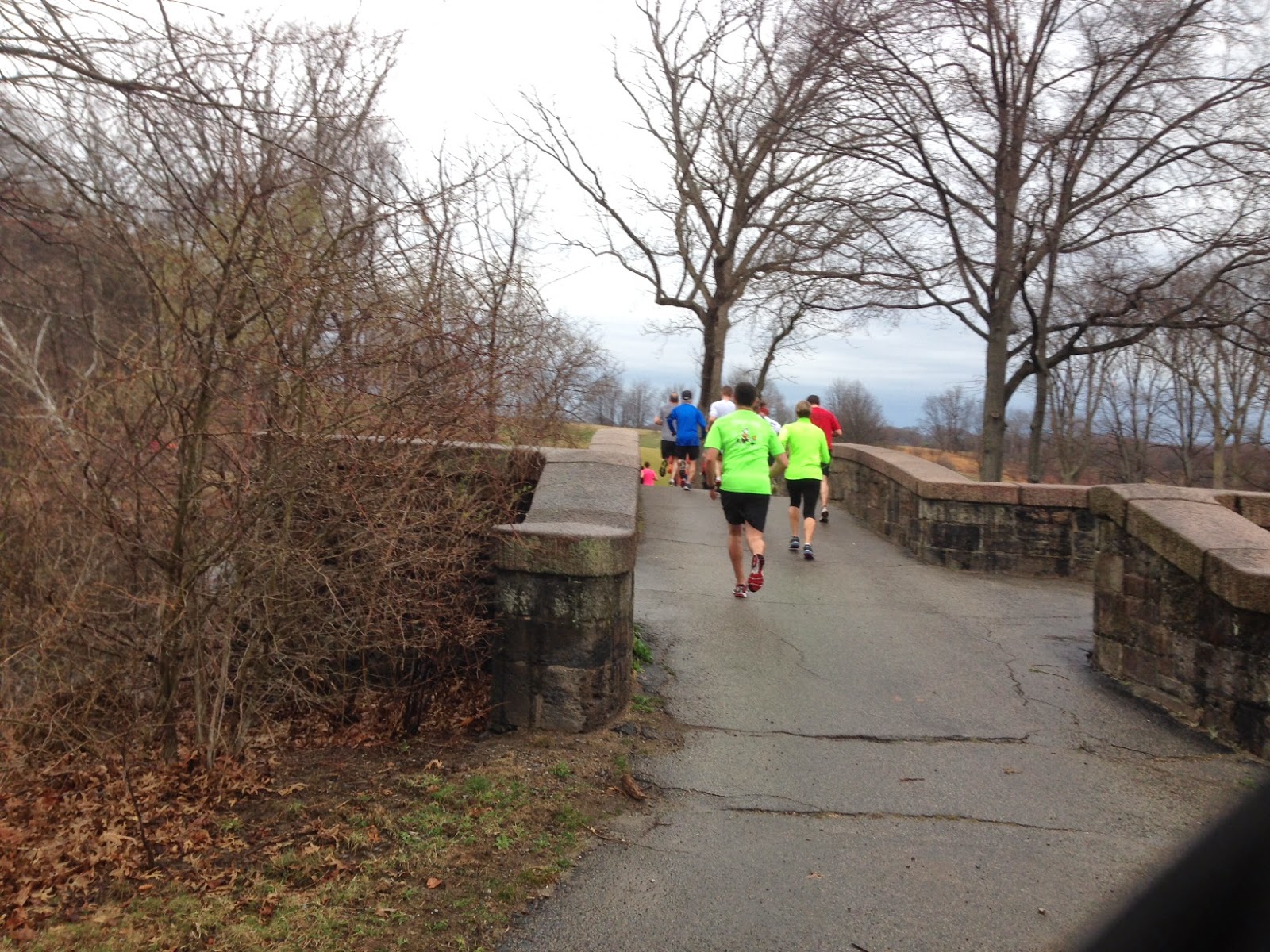 The rain cleared up about twenty minutes into the run and though the sun only briefly peaked its head out, it still made for some great running weather. The course consisted of running out about two miles into Franklin Park, circling back and running another three miles back past the starting line and finishing at Doyle's Cafe, where a post-race party was in full swing. There was no free beer or food, but both were for sale outside the restaurant.
The post-race party was a bit too crowded, so we decided to take off and head home to have our own post-race party.

Overall I'd say this race was just barely worth the price - $25 - considering that there was no gear check, no race shirt (unless you were one of the first 300 to register) and no free beer/food at the finish line. This seems like a small road race that 18 years ago was probably super fun in the low key way that non-official races are. But after growing in popularity for 18 years, race organizers should take the time to upgrade the race to accommodate the 1500 runners that show up for this race - or they should just cap registration at 500.

Still, it was a fun Boston experience with a course that circled through a beautiful park and definitely a race that I would run again next year, now that I know not to bring any extra gear and to plan extra time to make it from basecamp to the starting line.

And for Chicagoans used to flat courses - the rolling hills here provided a wake up call to how the rest of the world runs.