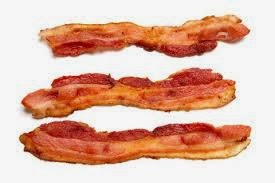 There's a new race coming to Chicago this summer:

It's a race dedicated to... oh, you guessed it already: bacon.

Sounds pretty sweet - obviously not healthy at all since a 5K only burns about 300 calories but still, sounds good.

But the part where satire becomes reality is that along with the 5K course there is also a .05K course. For real. .05K. That you sign up for, officially. That's pretty funny. Except that The Onion invented the .05K two years ago to make fun of Paula Deen. And now fake news creates real events.

Excerpt from The Onion:
"This .05K walk may be one heck of a challenge, but it's for such a good cause I'm darn sure gonna finish it."

I can just imagine people saying that on the morning of June 7th in Montrose Harbor. I'll probably hear them say it. Because I'll be there. Eating ALL THE BACONS.