April 13, 2012
I've been using the Nike Plus FuelBand for almost a week now and I think I'm ready to give a breakdown of my experience with it (if not a full-on review).

Just to give a basic overview to those who may not know what this device is or does, it's basically a wristband that measures your activity throughout the day and gives you a constant read out of how much NikeFuel you've earned. NikeFuel is a made up calculation that also translates into Calories Burned, Steps Taken, or Distance Covered. It's not an exact science; it's pretty much just a measurement of how much energy you've expended.

You're able to set goals for each day, deciding in advance how much NikeFuel you think you'll earn each day and setting your goal for that amount. Your NikeFuel levels are stored and tracked in your Nike Plus account where you can compare your statistics with other FuelBand users.

So, on to more specifics.

First of all, it's clear that Nike followed the Apple design model with this thing, putting form on the same level as function and deciding not only what it would do but what it wouldn't do. Design-wise, it's a simple, stylish wristband that starts to feel natural only a few days in. Functionality-wise, there's only one button on the band itself and you can only use it to view your current data (rather than being able to update or make any changes through the device itself).

This can at first seem like a limitation, but it actually simplifies the device and lets you quickly gain an understanding of how it works rather than spending a lot of time discerning what its various controls do (on the flip side I have a heart-rate monitoring watch... I have yet to fully understand that thing). For the FuelBand, the settings can only be changed through a downloadable software that pops up when it's hooked up to your computer to charge or in the mobile app when it's synced up.

The most interesting design decision that I've picked up on so far is that once a day starts you can't change what your goal is for that day. At first I thought this was a little annoying; why shouldn't I be able to raise or lower my goal during the day? 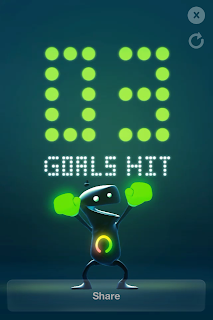 However, after using it for a week I am totally on board with this design decision. If you're creating a device that's designed to change habits and make people more active, why would you allow them to cheat? Several times already I've found that an accidentally high goal has caused me to decide to be more active in order  to ensure that I don't fall short of my goal for the day. I've found myself skipping taking a bus (like coming home from this play on Tuesday) or deciding to fit in a brief run over a busy lunch (yesterday).

So in terms of changing habits and getting people to become cognizant of their activity levels, this thing nails it. 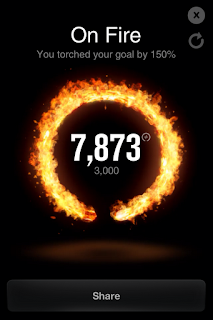 In terms of negatives, it still doesn't measure running exactly (which I pointed out before). But it's actually changing my thinking to picture my activity in terms of a full day of exercise rather than just counting my running, which is very cool.

The biggest issue, though, is a current glitch with the firmware on the device that causes it to fall out of sync with your profile and thus keep any of your data from uploading to the Nike Plus site. This is a pretty huge issue (it happened to me earlier this week and I lost all my activity for both Sunday and Monday). When I was on the phone with customer service they said that this is a common bug right now and that they're working to fix it.

If they can get that fixed quickly this shouldn't be an issue, but if not they'll have some major backlash on their hands. One of the key selling points of this device is that it gets you invested in how much energy you expend in a day. If the device starts losing that data once you're invested in it that can be pretty frustrating.

For now, I have to say, well done Nike. I'm pretty obsessed with this thing.