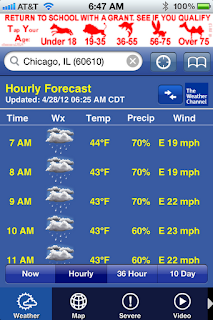 After waking up and checking out the weather report Saturday morning, I wasn't exactly running out the door for ten windy, rainy miles along the lakeshore for the Lakefront 10 Miler. But as Krissy Moehl says (and as I quoted her last week): "There's no bad weather, only bad gear." With that in mind I put on waterproof socks and plenty of layers.

I probably could have still used an umbrella...

Luckily the rain was more like a steady drizzle than a real downpour. Most of the runners waiting in Montrose Harbor for the race to start were either hiding under the sponsor booths or had the foresight to bring umbrellas.

When the rain stopped around 7:30 I headed to gear check (and so did pretty much everyone else). The line went from about five people when I got in line to this a few minutes later:

The weather ended up cooperating and I felt a lot better than I expected, despite some strong winds coming off the lake and a brief reappearance of rain. And the amount of free stuff at the various sponsor booths was impressive.

My full review of the Lakefront 10 Miler is posted on Newcity.

This morning I headed north (along with Rahm Emanuel, supposedly) to Ravenswood for the Ravenswood Run. Though this was the 16th annual running of this race it was the first time I've done it.

I was a bit nervous about doing a 5K the day after the 10 Miler but I'm glad I did. The weather was a lot nicer today and the race had a great neighborhood feel.

My review of the Ravenswood Run is posted on Newcity.