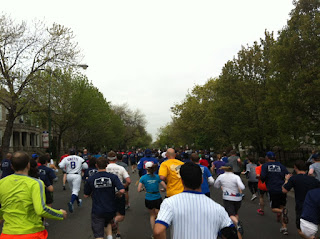 Despite the (slight) prediction of rain this morning, the weather turned out to be perfect for the 7th Annual Race to Wrigley 5K. Lots of people came out for this one (supposedly more than 8000).

The course was nice and wide - they had full streets blocked off for this which was really nice and the mile markers were really visible. Especially cool to run through the ground level of Wrigley Field. But you can read my full review at Newcity.com!

Here are some things that stuck out for me during the race: 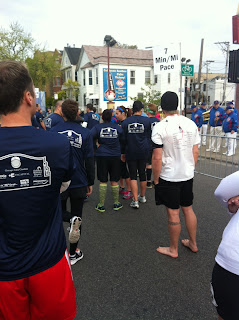 * At the starting line one woman tells another about the Nike Women's Marathon in San Francisco and how at the finish line "guys from Texas give you Tiffany necklaces." Since I am a guy from Texas and since I know (from a review written by a fellow runner) that it's actually firemen that give out the finisher's necklaces, this makes me feel more masculine. "Texan" = "fireman" in this woman's mind. Yes.

* There's a guy wearing no shoes. This seems cool on trail runs, but this is Wrigleyville. The streets are paved with broken glass... or at least shattered dreams. (To be fair, I don't know how sharp the latter are.)

* It's announced that Sean Astin is running this race. He has to say a few words into the microphone. He's very brief. This makes me think he would rather have just run anonymously. But now I'm picturing hobbit feet.

* Just after passing the first mile marker we run past a police officer. She's talking into her walkie-talkie. She says "Yeah. They're all already out of breath." I wonder who she's talking to and what they asked her.

* As we're turning to run through the Wrigley Field concourse for the last tenth of a mile, one guy pulls out of the pack to lean against the stadium and throw up. I imagine this is a more common occurrence in that exact spot than people running.