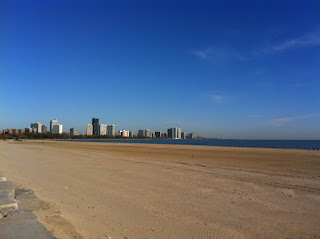 To start the day off right I managed to get to the starting line of the Bunny Rock 5K about 75 minutes before race time... on accident.

Apparently me from a month ago didn't trust me from today to make it on time and so put this race on my calendar with an 8 o'clock starting time.

Once I got over the disappointment in losing an hour of sleep unnecessarily I was able to take the time to appreciate the Montrose Beach view. I also got to watch everyone else slowly trickle in until it was full-blown Easter madness, with a swarm of bunny ear-wearing runners gathering around the starting line. 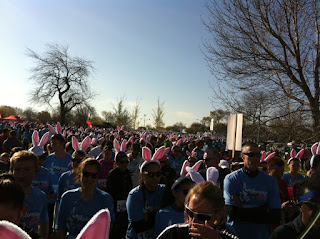 It was a really great race and I had a great time. My race review is up at Newcity.com

But here I want to tell two brief stories of things I saw during the race. One is hilarious and one is frustrating... and they both involve kids running in the race (between the ages of 8 and 10).

I'm going to start with hilarious:

As we reached the first mile marker this little boy next to me that had been running like mad the whole time (it's pretty amazing how kids run so fast, with the flailing arms and everything) caught sight of the flag saying "MILE 1" and suddenly pulled up short, yelling out "WHAT?!?!?! Only mile ONE!?!? Forget this!" and started walking. I don't know if he was under the impression that he had been breaking all kinds of records and was nearing the finish line in seven and a half minutes, but his outrage at that mile marker was both hilarious and (just a little) heart-breaking. I would have loved to see his reaction to the second mile marker...

Anyway, the second one is much less hilarious and much more frustrating:

For about half the race I was paced by a father and daughter duo. At first I thought it seemed really cool that the dad was out running with his daughter, but a few minutes into the race I just wanted to pull him aside and tell him what an asshole he was being. I should at least thank him for encouraging me to run faster simply by making me desperately want to stop hearing him, but he was constantly harping on his (8 or 9 year-old) daughter to run faster. And not in a positive, encouraging way, but with comments like, "This is NOT fast enough!" and "You have the rest of the day to rest!"

But the absolute worst moment was when another guy about his age ran past them and he turned to his daughter and in his most "I'm so disappointed in you" voice said, "Well... there goes my third place finish..." Seriously? Seriously.

Not having kids, I know I'm speaking to an area I have no experience in, but it's super frustrating to me that parents would treat their kids like that. It's awesome that he is encouraging his daughter to run, and even to run fast, but there are so many positive ways to do that. Demanding is bad. Guilt-tripping is the worst.

That guy needs a visit from the shadowy Easter bunny: 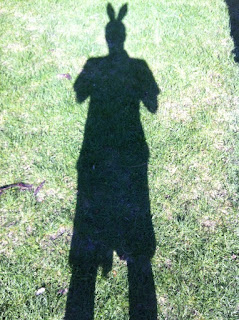 And an article about positive coaching.