June 11, 2012
Saturday morning, Brynn and I woke up at 4:30 to get ready for the Chicago 13.1 Marathon half marathon. (sidenote: as I mentioned in my Newcity review that "13.1 Marathon" title is a clever bit of misdirection - obviously you could argue that it's just the title of the race series, but to me it seems to give the impression that this is a "marathon" rather than an event that includes a half marathon and a 5K.)

We got to Millennium Park around 5:20 and got in line with the rest of the runners heading south. It was a lengthy line, stretching down Michigan for a while, but volunteers were loading us on buses pretty quickly and we were heading south by 5:40. 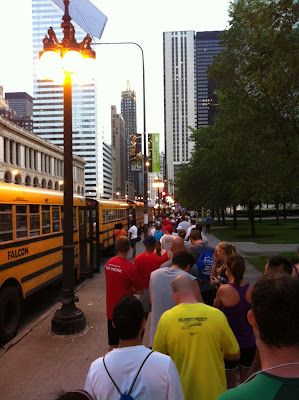 Once we got to the South Shore Cultural Center we headed over to the VIP area and checked in. What was especially sweet about this VIP tent was that it was located right at the finish line, which made it super easy to get to after finishing and gave us a direct view of the finish line.

We went and met up with a big group of Chicago Running Bloggers near the gear check. It was really cool to meet these runners in person since I've read most of their blogs. Check out the picture.  Not sure if you'll be able to tell which one is me... (hint - I'm the one that's not a female). I also saw both Maggie and Ginger Foxx on the course which was cool - I've been running a lot this year but don't always get to see familiar faces on the course. I also saw Brynn pretty close behind me after I made the turnaround which was exciting. Did anyone else think that turnaround was a little anticlimactic? At one point you were running north, and then there was a mister, a guy on a chair reading a magazine and a cone and you realized you should start running south. Otherwise I thought the rest of the course was great. And the post-race party was super-fun. Beer in the morning? Yes.

It was hot out there and I'm pretty sure I couldn't have gone much farther than a half marathon, but it felt like a perfect distance on Saturday morning, even with the heat (all the water stations, wet towels and ice cubes definitely helped). But the best part was getting to run with Brynn and hang out afterwards!

This was the first year that Allstate Life Insurance sponsored the race and I thought they did a great job - there was a ton of support and they made getting to and from the South Shore Cultural Center very simple - a big accomplishment for so many runners. Looking forward to this one next year (thought maybe it could be a little cooler...)