A Weekend of Running and Volunteering

June 26, 2012
Saturday morning I woke up at 6:30 and headed to Montrose Harbor for the Proud to Run 10K. Sunday I woke up at 4:30 and headed to Grant Park to volunteer for the Chicago Women's Half Marathon (which Brynn ran). So the weekend was pretty dominated by running and not so much by sleeping (that's for next weekend when I actually have no races scheduled for once!).

This was the first year I've done Proud to Run, even though the race has been around forever (31 years) and I had a great time. It's a relatively small run (about 750 in the 10K) and has a real feeling of community. My full review is up at Newcity.
I felt really good the whole race (despite only getting around 3 hours of sleep). I finished with a 47:15 and would have liked to hang out for a while at the post-race party but I was tired and just kept running to the Wilson red line stop to head home.

Then Sunday morning I woke up at 4:30 to volunteer for the Chicago Women's Half. I was going to catch a cab there but as I walked out the door I thought I might be able to make it on time on foot. I ended up running for about 10 minutes of the way and got to the volunteer meeting mount (Columbus and Balbo) around 5:05.

I was kind of surprised to see some people walking around this early. They weren't partiers or anything, they really just looked like tourists walking the streets and pointing at buildings. Kind of weird. But I did get a great view of the sun coming up from the bridge over the river on Michigan at 4:45. 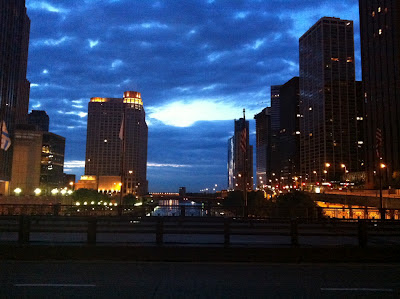 After checking in at the volunteer tent and getting my volunteer Fleet Feet shirt, I got sent over to the starting line area to start getting things set up. The starting line and most of the chute had already been constructed and was cool to look at in the dim morning light. 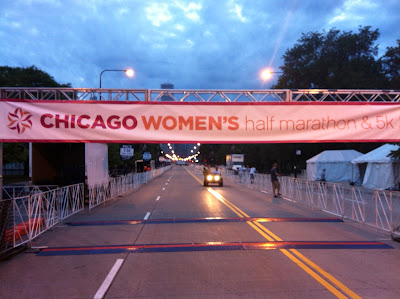 For the next two hours I worked at unpacking boxes of granola, mixing gallons and gallons and gallons of Gatorade and setting up trash/recycle bins. I wish I would have gotten some pictures of that stuff but we were all seriously working almost nonstop and I wasn't thinking about documenting anything.  Although, I did see Brynn just before the half marathon started and got a picture of her waiting in the (all-female) starting chute: 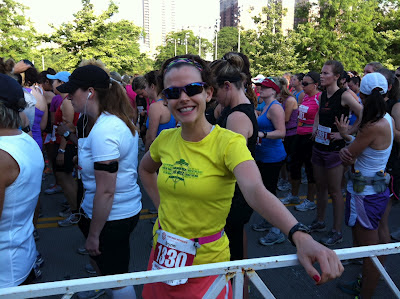 After the half marathon kicked off, race organizers waiting about 15 minutes and then started the 5K. After the 5K runners cleared out, we moved a ton of water and Gatorade from one side of the chute to the other and started preparing more Gatorade. I really love organizational activities so all of this was really fun. Less than 18 minutes after the 5K started the leaders started coming in. It was really cool to be at the finish line inside the chute to watch the leaders (and the rest of the runners) come in, and hand out water to them. 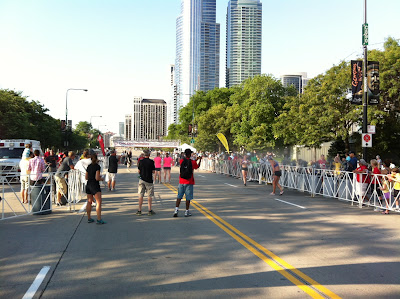 We had a pretty good rush of finishers for the 5K and then a bit of a lull where we regrouped and started stacking water bottles again for the half finishers. I missed Brynn's finish because I had my head down grabbing water bottles but she came over to the water station after collecting her pink yoga mat 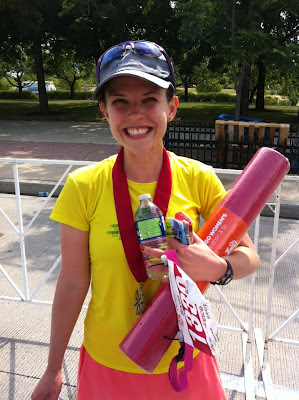 And then she helped me pass out water to other half marathon finishers, since almost all the water volunteers I started with had left at this point (around 10:30 - so with 5 1/2 hours of non-stop working, I can't really blame them, especially since two of the volunteers passed out due to heat exhaustion - so busy making sure runners are hydrated they forgot to take care of themselves).

That's something I learned from this volunteer experience - when you cross the finish line and get your water and snacks and medal - none of that would have been possible without a small army of volunteers that got there before you and will leave after you. I have always made an effort to thank volunteers but I will do so even more now that I have done it myself.

And yes, the other thing I learned is that Brynn is way more awesome than me: 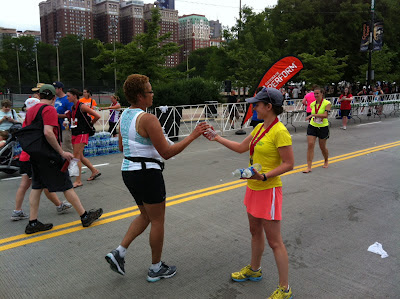 (And that a female-only half marathon is the best type to volunteer for if you're a guy.)

Brynn wrote the review for Newcity this time, though I got to supply the questions. It's a pretty great write-up. Hopefully Newcity doesn't fire me and hire her now...