June 11, 2012
So, after the punishing (at least to Chicagoans) heat from Saturday's half marathon, I did the only logical thing on Sunday morning: I woke up at 6:45 and took a cab to Soldier Field so I could do day-of registration for the Run Home Chicago 10K. Brynn was definitely not feeling that idea so she went back to sleep.

I'd been getting interested in this race since it was an inaugural run that had been garnering a lot of attention leading up to the event. After registering (and running into Kate from Fit-Ink) I was pretty impressed to see Andrea Metcalf as the announcer and a big selection of presenters supporting the race (but it is a race to end homelessness so I can see why they were there.
Secretary of State Jesse White was there, with the Jesse White Tumblers - Kate said he was  participating in part of it (first as part of the base of a human pyramid that the tumblers jumped over and then he did a head-stand and split his legs and they jumped over him again). At the time I believed her but I just looked him up and he's 77 years old. If that was him performing, he deserves some high-fives because that headstand was solid. Now I need some proof Kate! Whether he was actually in it or not, this performance made me feel better about paying my driver's license fees. 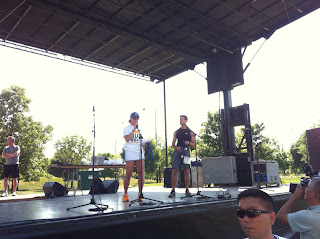 Congressman Aaron Schock (who was voted "America's Fittest Congressman" by Men's Health last year) not only spoke, he also ran the 10K (and beat me by a full four minutes). He also pointed out that "being the fittest member of Congress is like being the best surfer in Kansas."

Chicago Bears Earl Bennett (who kicked off the 10K and ran the 5K) and Israel Idonije were also there.

I won't go into too much detail about the race itself since I already covered most of it in my Newcity review, but basically it was really hot and the course was an out-and-back double-loop (meaning the 10K runners basically ran the 5K course twice). There were a lot more 5K runners and walkers than 10K runners so this design made the course pretty packed for the second lap, which was when the heat was really getting to me anyway. 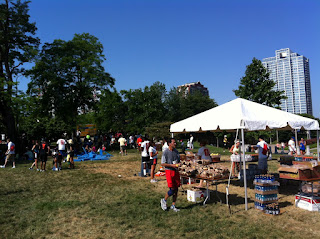 But the finish area was GREAT. Cupcakes from Swirlz Cupcakes, pizza from Home Run Inn pizza and all the normal stuff: gatorade, water, bananas, oranges, apples, bagels (I grabbed a bagel and it actually felt like it was already toasted... seriously it was pretty hot).

And best of all, hot dogs from America's Dog, who I really love since two years ago they selected my submission as a winner for their hot dog design contest. Picture the amazingness below: TEX MEX DOG - refried beans, guacamole, salsa, cheese, sour cream, jalapenos... on a hot dog. Amazing. It was only on sale in their Chicago locations for two weeks (I guess it sounded better to me and them than it did to other customers) but they definitely won my loyalty with that... and reaffirmed it with free hot dogs after a hot 10K.
This was a great inaugural run and I hope they improve the course for next year (or just cut the 10K and use the same course but just for a 5K so there's no loops). I had a great time before, during and after even with the heat.

And I realized afterwards that Run Home Chicago marked the 20th officially organized race that I've run this year!