Running in the Evening - Torchlight Run

June 22, 2012
Last night's inaugural Torchlight 5K was my first "official" evening run. Luckily, Maggie's write-up from last week's Jim Gibbons 5K had gotten me thinking about what/when to eat to get ready for an evening run like this so I ate a Clif bar around 4 o'clock in anticipation of being hungry and needing fuel before the race.

As I was leaving my apartment building I randomly ran into a girl who was also heading to this race and was about to get picked up by a friend who was also running, so I ended up catching a ride there with them. This was helpful in that I didn't have to run to the starting line as I had planned, but it also meant I had to ride around as we tried to find parking - not having a car I'm unaccustomed to this annoying challenge. But after passing the course, we found parking relatively easily at Adams and Wabash and then ran the mile to the starting line (fun fact - my apartment is only 1.7 miles from the starting line, so the driving only cut out 3/4 of a mile).

We got there at 7:10, along with almost everyone else. Since they only had race day packet pick-up, the line was crazy: 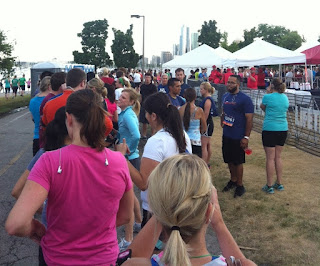 But it actually didn't take very long though, as there weren't any timing chips to pass out and bibs were assigned on the spot, meaning volunteers didn't have to find our bib; they just gave us the next one in the stack.

The starting line was on a little grassy hill, which was interesting for a race on the Lakefront, and it seemed like people were more there to have fun than anything else. This could be because Life Time Fitness, who organized the race, sold almost 1000 Groupons for $15 entries into this race - attracting a lot of people who otherwise might not have run. Good call. Seems like a smart way to boost participation at the first year of an event and help spread positive word of mouth for next year.
My review of the race is up on the Newcity site. I'm trying out a new format that's less wordy and more focused on the particular aspects of the race.

This one was an interesting one because of the focus on the afterparty.
The plan seemed to be:
This makes a lot of sense to me, especially if you want to get people who don't typically run out on the trail. But I noticed a lot of the people who finished relatively quickly (let's say under 25 minutes), finished, grabbed their stuff from gear check and took off. So this tactic might not really connect with those types of runners. It doesn't seem like that's who Life Time Fitness is going for, though. 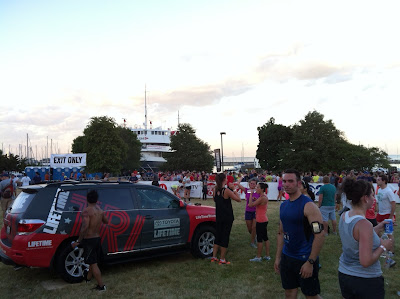 Whatever the target audience, two beer tickets on a bib is a great innovation to me, though I don't know if it's worth trading in an official time for. But since I usually use my own watch to track my time anyway, I guess it's a pretty good trade off.

Speaking of my watch, I used the split function for the first time this race, which led me to think that the second mile was way off. I felt like I was running the same pace the whole time, but ended up with these splits:

Maybe I'm just a really erratic runner and didn't know it, but that seems fishy to me...

I stuck around for a little bit to down my free beers, which brings me to:

Improvement on natural runner's high: Down two beers as quickly as possible right after finishing a race. It's very effective. (As long as they're super-light beers like MGD64 - that way your body is fooled into thinking you're just drinking water with a weird flavor added...)

On the walk home, as I was crossing Michigan and Chicago a group of about 50 skateboarders came through the intersection together looking awesome. I tried to catch up to them but the two beers slowed me down... I like this picture though - my iPhone knew to focus on them and nothing else. 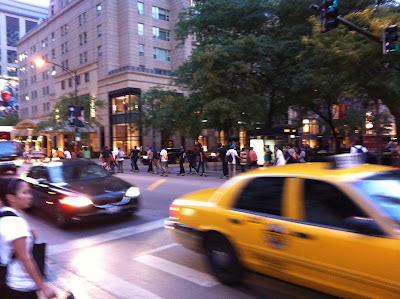