Running for the Zoo (on my 6th anniversary)

June 03, 2012
This morning my wife and I woke up around 6:20, and not just to get the most hours out of our 6th anniversary. We were celebrating by running the United Run for the Zoo together. She's been pretty busy with school over the last several months so this is the first run she's been able to do with me, which was pretty exciting.

We took a bus to the starting line and walked around the zoo for a little while - we had plenty of spare time since packet pickup was so well-organized. We were going to walk over and see the polar bear (I pretty much always say hi to the polar bear, the sun bear and the lions when I run through the zoo in the morning), but instead we just said hi to this big pacing cat. He really seemed like he wanted to take part in the run: 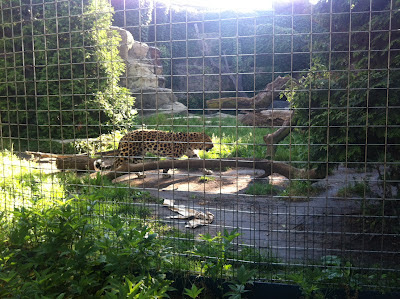 ...or maybe he was just weirded out by how many people were walking around so early in the morning.

After getting our bibs and race shirts (which are pretty impressive, by the way) we checked a bag and then headed over to the starting line. The weather was pretty much perfect for a race start (at least for me): in the high 60s and sunny. It could be called a little warm, but to me it means there's no reason for a pre-race jacket that I then end up wearing around my waist throughout the run...

Here's the 5K setup from in front of the starting line (lots of empty street!): 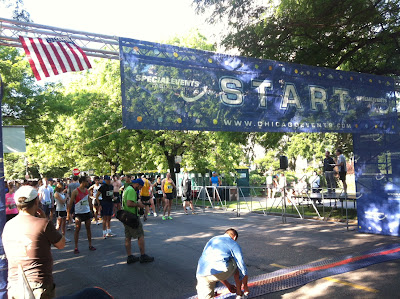 And the 10K from inside the corral: 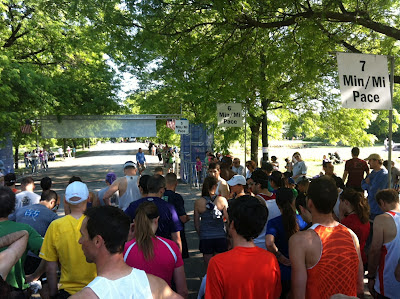 No one wanted to be the punk to stand in front of the 7-minute pace marker. Even the super-fast runners were backing up so as not to look like braggarts, I guess. Hopefully race organizers get the picture and shrink the 5-minute pace group down... seriously, it just needs to be about one person deep to accommodate everyone who runs at that pace...

Anyway, the race was pretty great, aside from a really horrible portion of the course that I don't know how race organizers overlooked. At Waveland Park the course circled the softball fields before heading south again and turning left at Belmont Harbor. Seems like a good enough idea, but there just wasn't enough space or guidance to make this work. The elites ended up crossing the course and the runners heading out when they got to this point, and by the time I got to that point (I was at a 7:39 pace) the runners heading back were just sticking to the left side of the Lakefront Trail (which meant we weren't running on the trail but in the grass beside the trail), which got especially difficult near the big totem pole just before Belmont Harbor... Anyway, it was just a really bad section of the course. Not sure what they were thinking there.

But the last mile and a half or so was pretty great, especially the portion that went through the zoo. There were a lot more spectators than I expected in the middle of the zoo and they really contributed a ton to the atmosphere, cheering and encouraging like crazy. Spectators make a huge difference.


And the finish line was also great, ending in the fielded area (where there are also trails) just to the east of the zoo. But the best part was popsicle bombsticks at the finish line. Seriously... you could sell me on a 10K on that alone...

As usual, my full review of the United Run for the Zoo is posted on Newcity.

My wife and I had a great run (she was at an 8:34 pace which was super-impressive since she's just getting back into her running training after a hard semester of school!) and got to hang out before and after. Hopefully she'll be joining me on future runs (I already know she will be for the next two weekends, which is exciting).

On a side note (that's sort of related) last night, we went with a bunch of friends to see the epic 7-hour theatre spectacle that is Angels in America (at Court Theatre - closes today, unfortunately). There were a few reasons that drew us out to this show, including:
But aside from all these reasons, the biggest factor that fueled our decision was that our friend Jack Birdwell, who was the understudy throughout the show's run for Joe Pitt and Roy Cohn would be taking the stage as Joe Pitt. So from 3pm til just after midnight (with a break from 6 to 8 for dinner) we were in the theatre last night. And Jack killed it. Not only was the show incredible, but Jack, who was taking the stage for the first time in the role, totally owned the role. (He also ran the Soldier Field 10-mile with me last week, so he's obviously multi-talented.)

Anyway, a late night at the theatre, plus an early morning with a run made my wife and I feel like old people, so to celebrate our sixth anniversary, we took a nap after getting home from the race...