5K March to College in pictures

May 16, 2013
Tonight I ran my first mid-week evening race of the 2013 season. I really love evening races and I'm glad the season for them has finally arrived (along with the weather to support them).

The race was the 5K March to College and this was the second annual running of the race (price: $35). I wanted to run this race last year but it didn't work out so I'm glad I could fit it in this year. Also, I started physical therapy for my knee yesterday morning (really my IT band - I know, I know, I'm a stereotypical runner with a stereotypical running injury) and already feel a bit better... which is good because I'm running a 5K on Saturday (PAAWR to Empower) and a 10K on Sunday (Chicago Spring 10K - I transferred down from the half because of my knee).

So anyway, below is a photo-filled breakdown of the 5K March to College from this afternoon.

The whole point of the race, organized by Center for Companies That Care, is to increase "college graduation rates among minorities and students with disabilities." To that end, there's a College Fair that started at 4pm (the race started at 5:30) which featured, among other schools, DePaul University (where I'm proud to work). There was also a collection of  white 5K March to College t-shirts signed by familiar faces, from Rahm Emanuel to Jim Gaffigan to Martha Lavey. 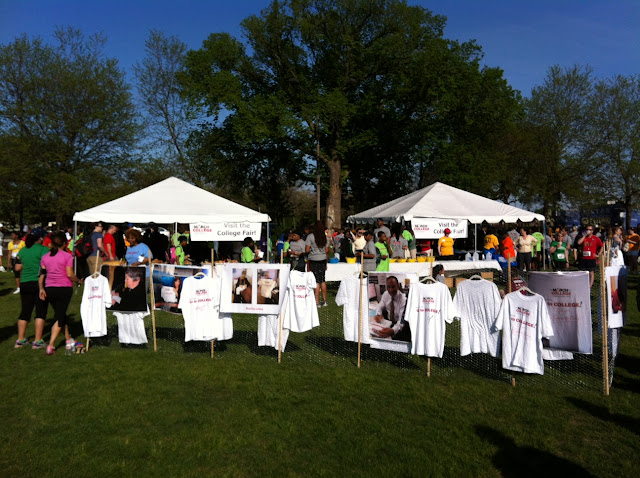 The pre-race entertainment was pretty sweet. A few minutes before the race was going to start the announcer called up two kids that he said were from his school (Urban Prep Bronzeville) and they started rapping. And it wasn't like, "oh how cute, kids rapping." They were actually really good. I should have recorded at least some of their verses but I was too into just listening to remember to do that. 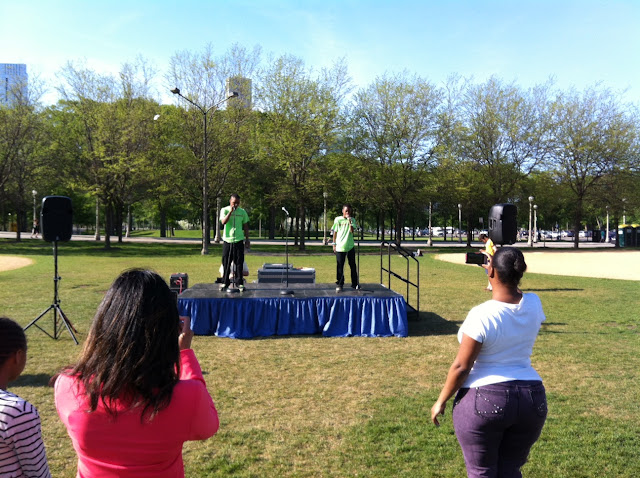 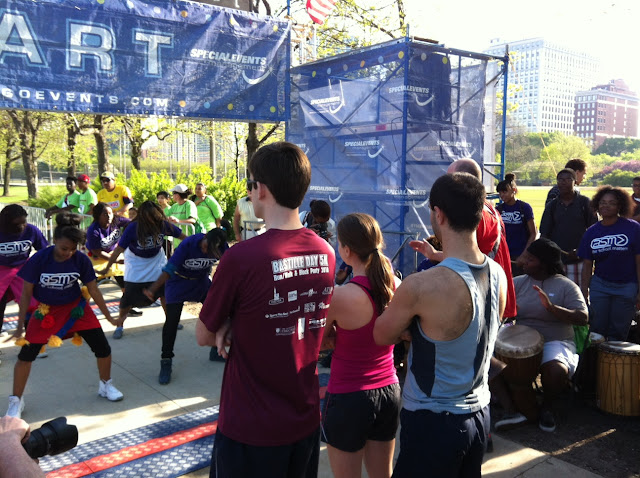 When the race started (about 15 minutes late), about 20 kids in the green "College Bound" shirts took off sprinting. I passed all but two of them within the first quarter mile. Still, I admire their gusto. I don't think anyone explained to them how far five kilometers is because they seemed pretty surprised that the race was still going after a few hundred meters. The last two kids I passed just before the first mile (running about a 7-minute mile), so those guys weren't playing around. 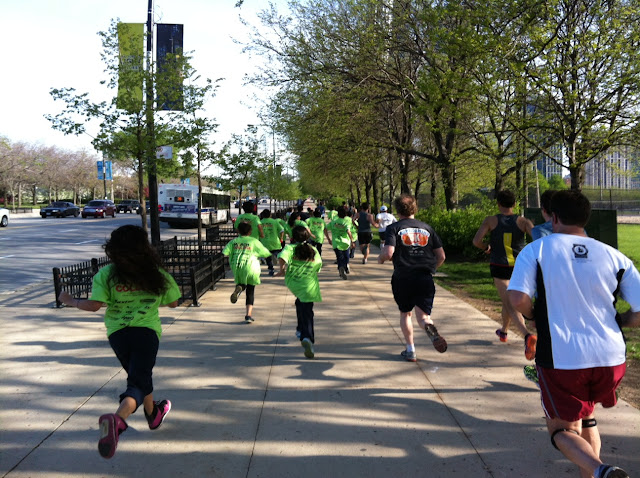 I fell into a weird no-man's land in terms of fellow runners around me. I wasn't fast enough for the fast group and was just a bit too fast for the next group. Between the half-way point and the end of the race I was mainly just running by myself with no other runners in sight, even on this long straightaway. I finished in 9th place overall with 23 minutes and noticed that the next runner didn't show up for about another minute. 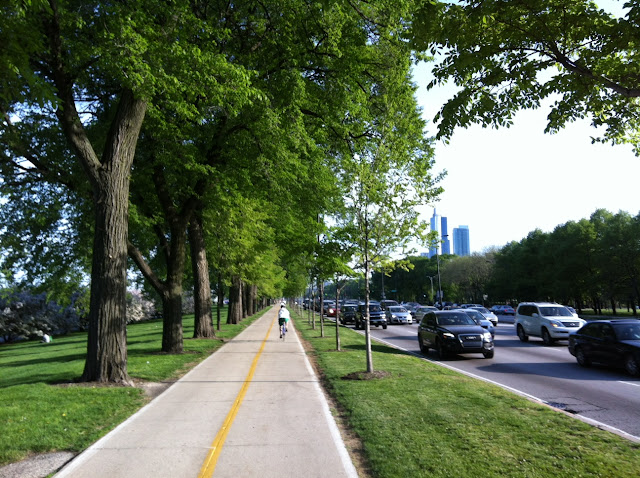 I think this is 10th and 11th place overall crossing the finish line about a minute after I finished. The first 18 and under finisher was not long after this. 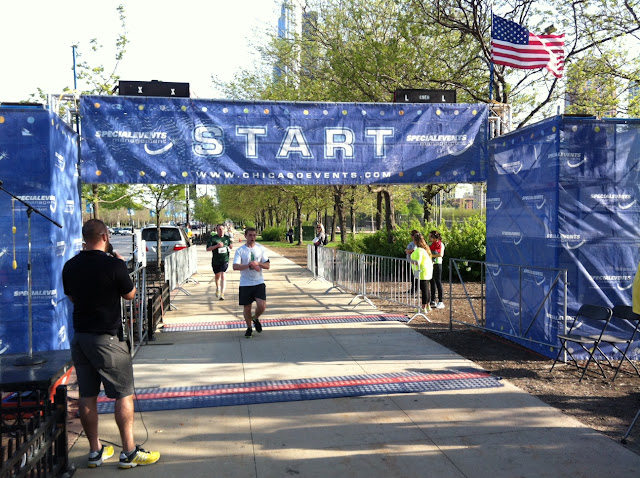 The post-race food was plentiful and delicious. Bagels, animal crackers, pretzels, granola bars and caramel-filled Ghirardelli chocolates (which I've never seen at a race before, but were very welcome). 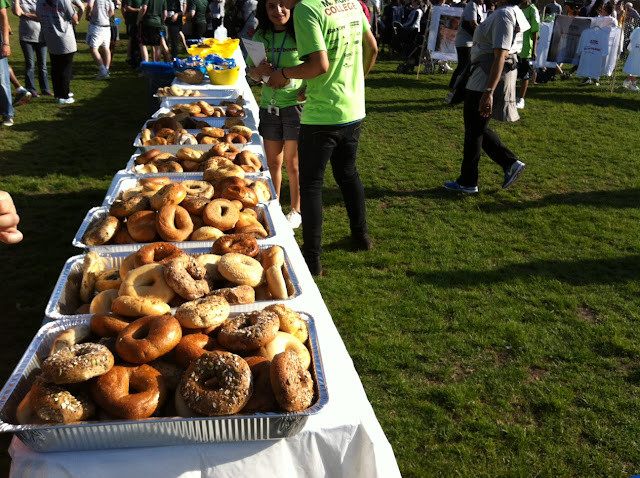 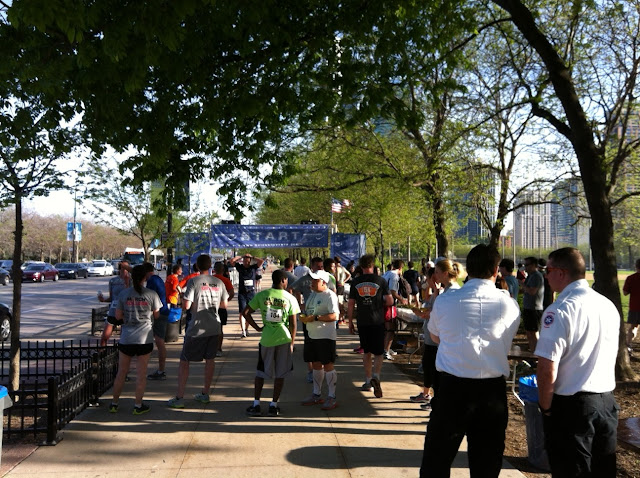 Overall, a fairly unique race that I would gladly do again. I liked the t-shirt concept and the encouragement for Chicago kids to go to college, especially after reading this from Marci Koblenz, President and Founder of Center for Companies That Care: "Only 6% of Chicago's public high school students graduate from college by the age of 25." Anything that helps promote education is a good thing in my book.