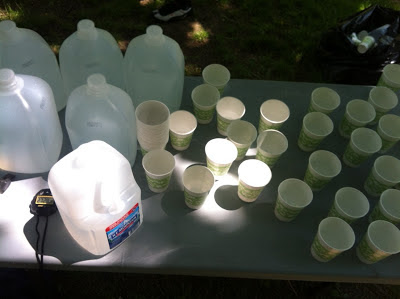 Some organizations are not quite ready to organize 5Ks. And Pan-African Association (a group that provides "services and programs that benefit refugee and immigrant individuals and families") is one of those organizations.

They have a great group of volunteers, an ideal location for a race and plenty of other well-organized family activities around the race (including dance lessons, kid's races, etc.). And though this was the second annual P.A.A.W.R. to Empower 5K (Pan-African Association Walk & Run to Empower Refugees and Immigrants), there was very little in the sense of "organization" around the 5K, which was scheduled to start at 10:30 (see schedule below) but didn't get going until 11:10. (seriously? 40 minute delay? yes, seriously).

But before I start describing the bad parts of this event and sound like the Type-A runner that I am, I'd like to talk about all the good stuff. And there's plenty of that too.

First, and most importantly:
I WON THE RACE.

Yes, I literally WON this race. As in, I got first place overall.

I have never won a race before. In fact, I've never placed in the top three. I did get fifth place in the Run for Res last month, but other than that I've never even come close. So this was very exciting for me. And I was in first for the entire run, which added an additional level of excitement. If you've never felt this feeling before (and I definitely haven't), I highly recommend it!

As I was starting the third lap of this three-lap course, I started lapping other runners (for the record, I really dislike courses where lapping is even possible). As I passed a group of girls I heard one of them say to the others, "See, there's that guy. I told you." I was "THAT GUY." I've wondered what it would be like to be "that guy" and to know that you were "that guy" and now I know. It's weird and it makes you feel self-conscious.

Similarly, as I was passing another group, one person said to the other, "Oh, look at THIS GUY." Being "THIS GUY" is actually a little better than being "THAT GUY." At least this guy is kind of included in the conversation... that guy is just on the outside looking in. Either way, lapping people makes them feel like they can talk about you in the third person even though you can hear them. Hence, courses should strive not to have the possibility of lapping.

Anyway... it's hard to dislike a race that you won. Especially when you're not the type of person who typically wins races. So here are a few more good things about the race.

The weather was amazing today. It was in the low 70s when the race finally started on a trail around a golf course in Warren Park. The sun was shining, there was plenty of shade, the trees were in full bloom and there was a simple trail to follow around a golf course (three laps). In short, it was a beautiful run. Here's the view from the starting line: 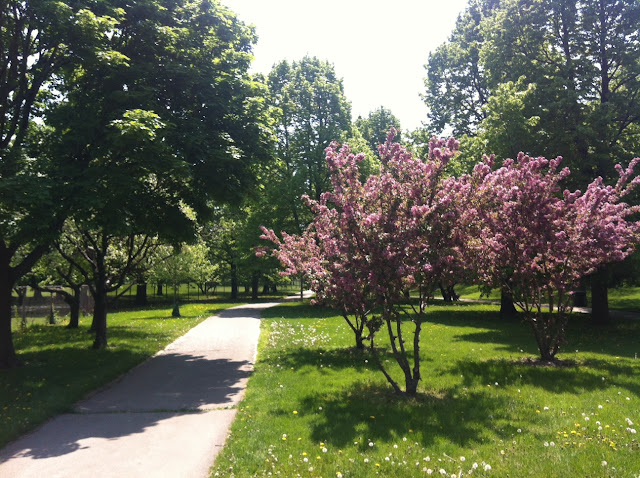 It was all very low key. Just before the race started a few volunteers gathered around and said, "Should we get started? Are we waiting for anyone else?" And then this guy on the right blew into a whistle to start the race just as he started a stopwatch to time the race. And the three guys in red shirts kept track of our times by writing them next to our numbers on a piece of paper each time we ran past them. After so many races where you're just a number this was kind of refreshing. I felt like I had a relationship with all these volunteers and they gave me high fives each time I ran by. 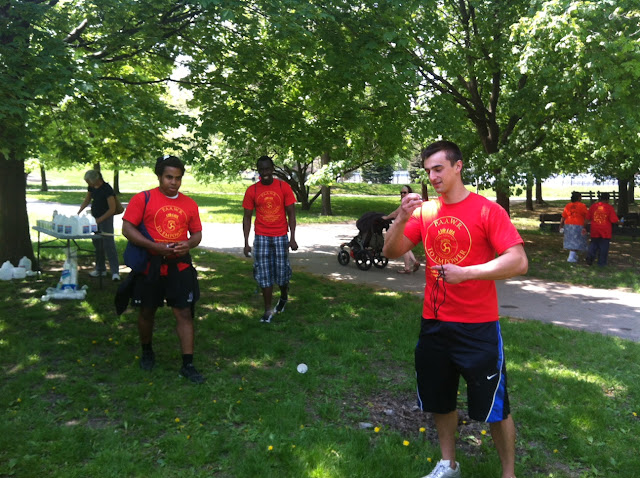 Here's a weird thing. Even though we were instructed (in no uncertain terms) to follow the inside track around the golf course (rather than the outside track), the only water station (which you ran past three times in the course of the race) was located on the outside track. Kind of out of the way for anyone trying to make good time. I never ran out to get water but the volunteer looked very friendly and she always cheered for me as I ran by. 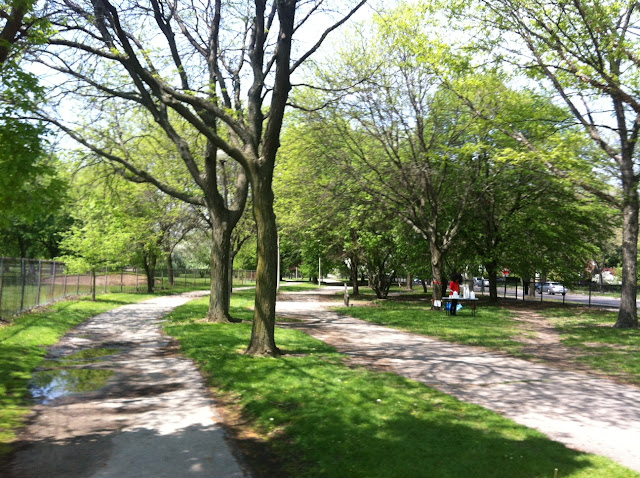 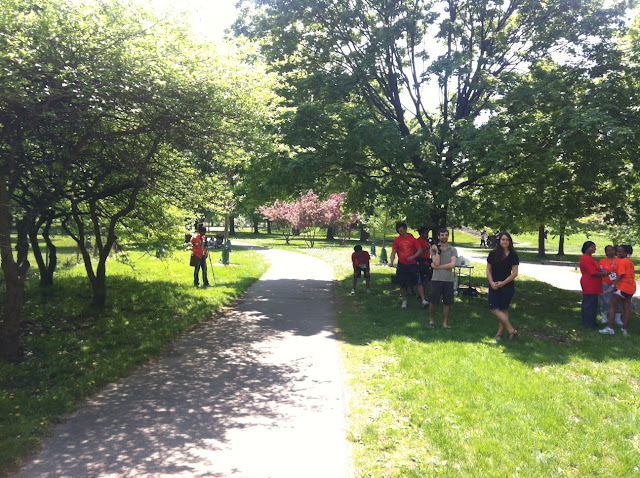 So, okay. Enough with the feel-good, right? You get it. To recap: great cause, friendly volunteers, beautiful course, non-competitive field allowing for total domination and ego boosting.

Now you deserve to know the big downside of this race:

Extreme disorganization. I have never been to a race that started 40 minutes late. This race was scheduled to start at 10:30. At 10:15 I couldn't find an organizer to tell me where the race would start. At 10:30 the main race organizer told me it would be starting at 10:45 and pointed into a vague area in the park where a white tent was located and said they would be asking people to gather over there very soon. At 11:00 I walked over to that tent and just stood around... at 11:10 we finally started. Completely unacceptable for a normal race. I didn't have anything else planned today, but typically I plan my days around these races. If I had planned to be somewhere else by noon I would have been screwed. And that's on the race organizers.

Tying into that: there was no gear check. Luckily, the Red Cross volunteer at the starting line let me leave my gear check bag with her, which was extremely nice of her.

Also, the race cost $25, which is a really good price for a Chicago-area race, but that price doesn't include a t-shirt. You only get a shirt if you raise $100, which is actually what the race site asks you to do when you register. I actually emailed the race organizer before registering to confirm that I didn't HAVE to raise $100 in order to run. He assured me that I didn't. But he didn't let me know that that meant I wouldn't get a shirt. I've never heard of that policy. Especially because the goodie bag only consisted of some paperwork on the organization, a flyer about Whole Foods (a sponsor) and a $10 gift certificate to Machu Picchu restaurant.

Overall, I can't really recommend this race, despite the great time that I had this morning. It's a great organization, a beautiful spot, a good date for a race and a good time for families (check out the dancing lessons below), but for $25 I expect a shirt and at least a bit of organization surrounding the race start. I think this organization knows what they need to improve and I think they can do it so I'm not writing this race off for 2014... but, I'd only register for it again if I had a completely free day at my disposal. In fact, I didn't even stick around for the awards ceremony scheduled to start at noon, because I didn't know when it would actually kick off. 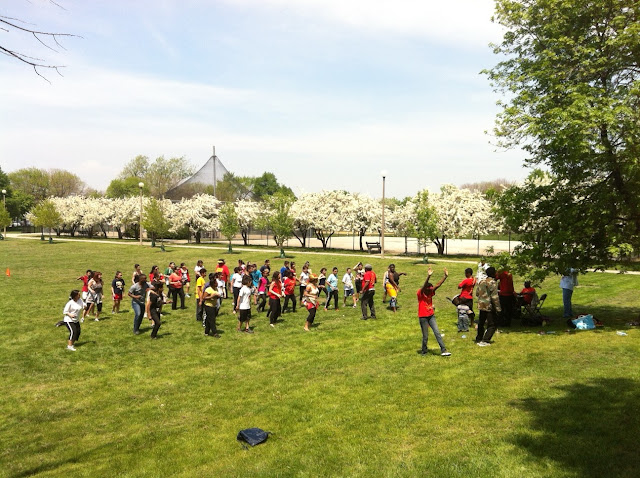 Basecamp for the race. A few sponsor tents and a big registration/packet pick-up tent. 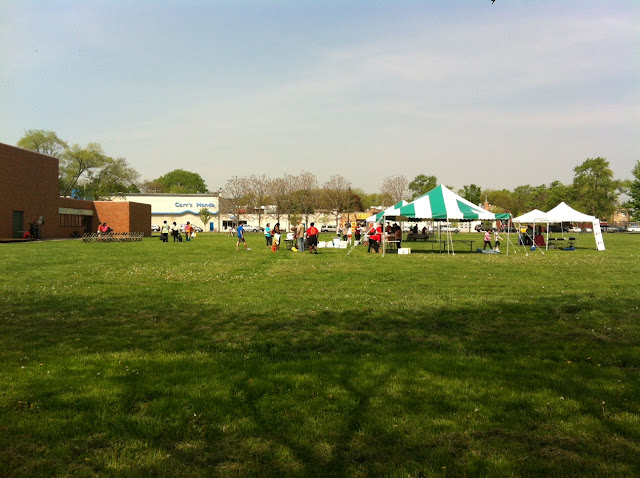 In closing, please remember for future reference, this is what a champion looks like: 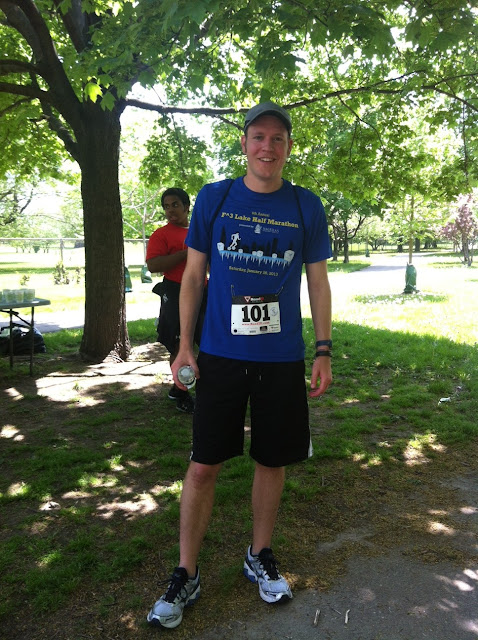