July 17, 2013
With Universal Sole recently opening a new location in The Park at Lakeshore East, their super-catchily titled Burgers & Beer 5K moved downtown with them for its second annual running (from Montrose Harbor last year). They also moved it up from the end of August to the middle of July, which may have contributed to the increase in entries.

Though the race announcer attributed the rise in entries (entries more than doubled from 609 last year to 1229 this year) to the relocation downtown, I'd say excellent word of mouth, a very eye-catching title and an race earlier date also contributed to the race selling out. But, the race directors are right, the Park at Lakeshore East is a nice little hidden gem of a downtown park that other races really haven't taken advantage of yet. It definitely didn't hurt that the second annual race was held in such a beautiful, centrally-located location. 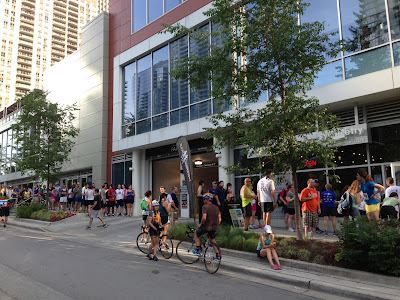 I picked up my packet last weekend (while on a run to pick up my Bastille Day Run packet from Fleet Feet I passed Universal Sole in Lincoln Park, saw their sign and stopped in and grabbed my packet for this one as well) and it was extremely convenient. Also, I'm pretty happy with the shirt - it's a nice yellow cotton shirt with a cool retro logo. I have enough running shirts and I like when races go with the cool t-shirt designs. I'll definitely be wearing this one

But the real reason I mention packet pick-up is that it looked like runners opting to pick up their packets on Monday evening before the race were faced with a pretty long line outside the Universal Sole. It seemed to be moving relatively quickly, but I wouldn't have wanted to be in that line.

Basecamp was in the south end of the Park and runners could check their gear there, grab some free samples of Muscle Milk and then head to the Lakeshore where the actual start line was. 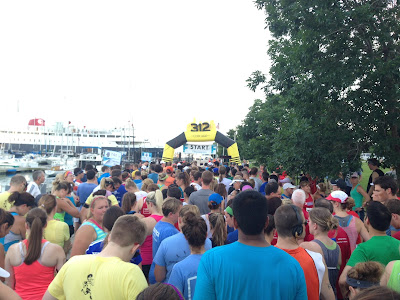 It was pretty hot and humid Monday night but most runners seemed ready for this. The pace groups were a little tight (as was the starting corral) given that there were almost 1300 runners. This resulted in runners gathering in the grass alongside the trail and then trying to funnel into the pack after the race started. Not the smoothest start and I hope race directors will do something about this next year - it seems like simply extending the pace group signs further north along the trail would have alleviated some of the runner clumping.

The course itself was nothing too impressive. An out-and-back along the LakefrontTrail, heading south to Museum Campus, turning left under Lakeshore Drive and then heading back to the starting line. The benefit of using this portion of the LakefrontTrail for the course\ though, is that it offers the ability to head south on the east part of the trail near the harbor and then head back north along the west part of the trail nearer to Lakeshore Drive, which kept runners from having to run directly back by each other.

After finishing, runners headed back to the basecamp for the titular burger and beer. Tickets on the running bibs allowed runners to claim each of these. Lines were relatively short when I got there (though I finished with a 29:04) and I got into the refreshment area pretty quickly. The burgers looked a little small so I went for a veggie burger (nice of them to offer this, along with a turkey burger as well). The 312 beer was also tasty. The post-race gathering was in the northeast corner of the park in a gated area.
I took off around 8:30 or so, so I didn't stick around to hear the raffle winners (which means I definitely won).

Although lines were quite a bit longer than last year (they did have twice as many runners this year) I'd still recommend this race. It's a fun vibe, people seem to be out to genuinely have a good time and you get a burger and a beer afterwards. I'd definitely recommend getting to the burger/beer lines as quickly as you can.

Also, though I didn't meet up with any first time 5Kers this time (as I did with the 5K RUN! to End Homelessness and the Chinatown 5K) it was still a fun run and a cool experience.