Book Review: Kings of the Road, by Cameron Stracher 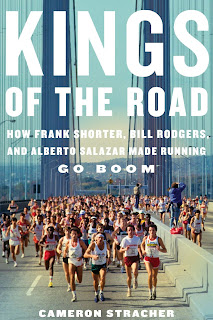 Another few weeks of going to physical therapy and not running, another running book. This time I read "Kings of the Road: How Frank Shorter, Bill Rodgers, and Alberto Salazar Made Running Go Boom

" by Cameron Stracher. This guy's an elitist, but the book is still a great read.

"Running is not soccer, or football, or baseball, where half the players on the field are victorious. There can be only one winner. Everyone else is a loser."

This sentiment, on page 91 of Cameron Stracher's exciting recounting of what he (justifiably) refers to as boomtime for running in America, also showcases his dual approach to this novel (his fifth). Aside from being an author and a lawyer, Stracher lists himself as a "competitive miler" in the mini-bio on the back of the book. And his competitive nature as a runner comes out pretty strongly in his writing. But I'll get to that in a bit.

Most importantly, Stracher is a compelling writer, with a firm grasp of what makes reading about running interesting. "Kings of the Road" jumps around quite a bit in time and location (mainly staying in the 70s and on the East coast), but he always keeps it fascinating. Throughout the book, Stracher covers various races, and he has a knack for recounting every twist and turn and surge and psyche-out with just a hint of breathlessness, managing to make the reader feel like they're right there with these front-runners (almost always Bill Rodgers, Frank Shorter or Alberto Salazar). As a runner myself, I'm probably biased, but it seems to me that Stracher's skill here can't be understated - he really knows how to make running exciting.

He also knows how to capture the spirit of his three stars: Rodgers, Shorter and Salazar. He paints these three very distinct personalities with intimate details from each of their lives. And though he clearly admires all three of them and presents them as legends, he effectively steers clear of painting them as anything more than fallible humans with foibles, quirks and rough edges. This style makes the reading all the more interesting and adds an additional level of depth to the recounting of the races.

Stracher's commitment to the sport of running is clear on every page, but as I implied at the start of this review, it also causes the book to stumble a bit towards the end. In Stracher's story arc, these three American running stars help usher in a new era of running in the United States, causing running to go from a series of little-known, poorly attended street races to a hugely popular industry (still growing today). But though Stracher builds up to this outcome throughout the book, he bemoans it at the end.

Discussing the New York City Marathon on page 139, he says: "As the event grew in size and revenue, the race itself became an afterthought, with more attention paid to participating than winning." These kind of complaints are repeated throughout, as Stracher subtly (and not so subtly) describes what he sees as the downfall of competitive running. In the epilogue, he even decries some of the race organizers he previously lionized by saying that, "In popularizing running, they inadvertently dumbed it down, celebrating the participant over the winner."

While I can understand his sentiment, I would argue that this is the beauty of the sport of running (versus any other sport). When I run the New York City Marathon or the Chicago Marathon (or almost any big marathon or other distance race) I'm competing in the exact same event and on the same course as world-class athletes. No after work softball player can say that about her sport, no weekend soccer player can say that about his sport. For me, and for many runners that I know, that's what sets running apart and makes it so exciting.

Still, though I frequently disagreed with Stracher's attitude towards the average runner and the result of the popularity of road races, there's no denying that he's an expert chronicler of running history.