Tonight was the Bastille Day 5k/8k Run/Walk & Block Party in Lincoln Park (just north of the Peggy Notebaert Nature Museum). I was originally registered for the 8K but, worrying about my IT band, I dropped down to the 5K just before the race (this change took all of 60 seconds at the registration table which was pretty impressive, especially since my time registered correctly afterwards).

Anyway, before the race, the set-up looked good. Beautiful weather, lots of outdoor space, a good live band and lots of runners. I even tweeted about how promising it all was. 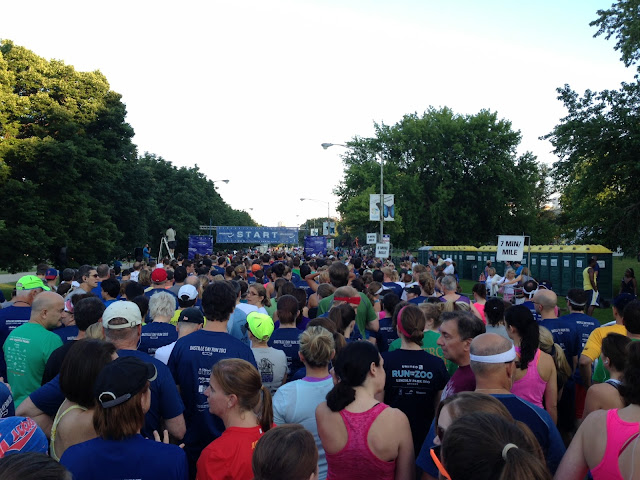 And it started out well. Lots of space on Cannon... 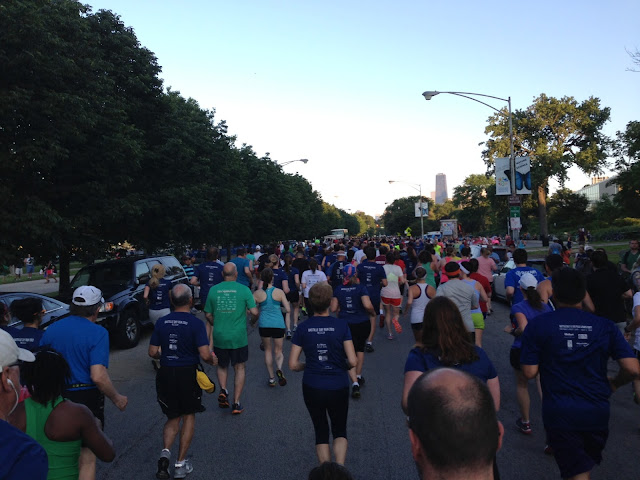 Lots of space on Stockton...
And then, just northwest of Barry, as the course headed out to the Lakefront Trail (and after I watched both Brit and Annabelle fly past heading back to the finish line for the 8K), the 5K course took a crazy left turn and crossed over the 8K course. It doesn't sound like that big of a deal, but it meant that packs of runners heading in opposite directions were forced to navigate around (and through) each other).
UPDATE - I was totally wrong about this. Both of those speed demons were running the 5K and crossing back over the 5K course. Thanks Jennifer for pointing this out!

I was running with a friend and we both kind of laughed about this. "What a weird course layout..." we said to each other. But then a little while later, the 5K course crossed over itself... for no real reason. The course made a little loop, but instead of having runners going north turn east and then loop back around on the west side of the trail, we looped in the opposite direction, meaning that the 5K course crossed itself twice.

Here's what it looked like heading into that intersection on the way back:
And here's what you were crossing when you made this turn (lots of happy bikers out there tonight, I'm sure):
There were a lot of very vocal reactions to this (and the other) turn from runners and bikers alike. And aside from these two weird course crossings (which seem totally avoidable to me) the rest of the race was extremely well organized (well... maybe the gear check could have used a little work). The shirt is pretty cool (dark blue with a mustache on it), the post-race party had a live band and there was one free Michelob Ultra (the beer for people who really just want to get hydrated with water that tastes a bit beerish) per runner.

I ran into one of my neighbors at the post-race party who said this was only his second race ever and he was rather disappointed about the one beer. He had registered because he thought they had advertised a happy hour afterwards. Looking into it, I'm guessing he's talking about this blog post. I've never seen a race that featured unlimited booze (with three pints of beer, Runnin' With the Horses is still the most I've ever seen) but I can see how someone might infer that.

I talked to all kinds of lovely bloggers before and after the race, including Maggie, Annabelle, Brit and Amanda and I'm interested to hear their takes on the race. Although the course crossings were pretty awkward and definitely amateurish course design, the overall experience was positive. Evening races are fun and having an outdoor party with free (I keep saying free, but the race did cost $32) beer, a live band and lots of running nerds is a good way to spend an evening in Chicago. 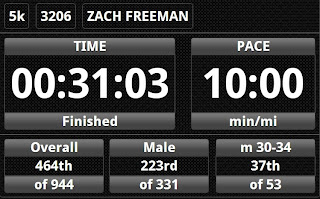 I was shooting for around a 10 minute/mile pace to keep from messing up my leg further (especially since I have four more races to do in the next five days) and I'm proud to say that I actually ran EXACTLY a 10 minute pace. I'm pretty sure I couldn't have pulled this off if I'd been really shooting for something that exact.

Overall, I had a good time and had fun running after an imposed hiatus of over a month. Will I do this race again next year? I'm not sure. Probably. I didn't have too many great things to say about it last year and I still ran it this year. I'm also an eternal optimist. This year they fixed the horrendous gear check and lack of free beer from last year. They also moved the starting line onto the street and the post-race party outside. Next year they'll make sure they're courses don't cross each other (or themselves). You know what they say: thirty-third time's a charm. 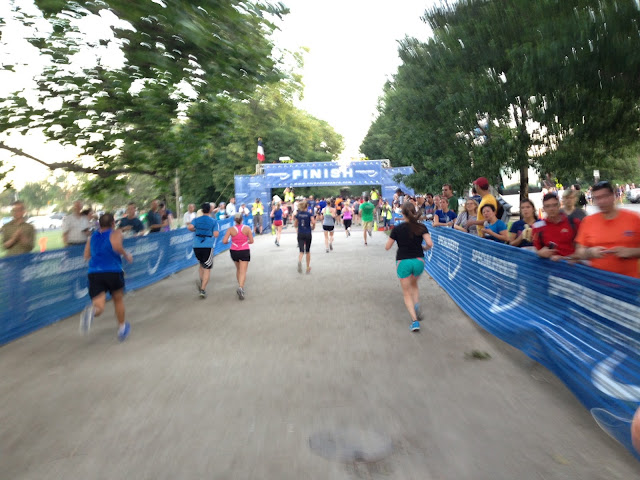