July 29, 2013
Even though I'm not a Big Ten graduate (like a good Texan I went to the University of Texas), I've been looking forward to the BTN Big 10K since last year. Partly because it's a well-organized fun race. But mostly because it has a slip 'n slide halfway through the course and last year I foolishly decided not to run off the course and slide on it (because I had my phone in my pocket but also because I was obsessed with getting a good time). Anyway, skipping that slip 'n slide last year was one of my biggest racing regrets so I wasn't going to make the same mistake twice. So even though it was only 59 degrees when I hit the course on Saturday morning, I was still determined to hit that slip 'n slide during the race. Fifty-nine degrees is close to perfect for a 10K along the Lakefront Trail, but it's a little chilly for a slip 'n slide, especially when you have to run half the course soaking wet.

For an in-depth review of the race, check out my Newcity review. For info on the slip 'n slide, keep reading here. 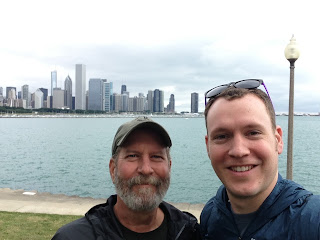 My parents were in town this weekend for Brynn's graduation (she's now Dr. Freeman - so when people address us they can automatically know that she's smarter than me. It's a good shorthand) and since I was allowed a +1 for the VIP tent I invited my dad to come with me. We had to wake up at 5 to get to the starting line by 6:45 when the corrals for the 10K closed (and they did close promptly at 6:45). I was seeded in Corral B but had to climb over the fence into Corral D (naughty, naughty) because I didn't get to the starting line til 6:50.

We had trouble finding the VIP tent for a little while but after I found it and we checked in I left my dad with the breakfast table and the 5K runners (the 5K didn't start til 8:30am).

There were a ton of people (12,000 runners overall) and I think that's right at the total amount of people that Solidarity Drive leading up to the Adler Planetarium can handle. Any more would have been madness. The corrals helped keep the course from becoming too crowded (even being two corrals back from my original corral wasn't that big of a deal - I only spent maybe the first mile or so passing people). Corrals were released every 30 seconds so you could still see the end of the corral in front of you when you started.

Running along the Lakefront was nice, especially with such cool weather. And I'm pretty thankful for the cool weather because when I reached the slip 'n slide at the turnaround there was no one taking the announcers up on the offer of "the coolest part of the course." This meant I got to hit the slip 'n slide at a full sprint and redeem myself from last year. And it was exactly as great as I had anticipated it would be. Conclusion: more races need on-course slip 'n slides.

I was a bit worried about my IT band issue but had decided just to run a little harder anyway and just see what happened. I focused on turning my feet over quicker (taking more strides) and not angling my legs in when I run - two things that my physical therapist pointed out to me as things to work on after a gait analysis. I felt pretty good at the finish line (with a 51:31) and I'm still not injured today so maybe I'm on the mend... we'll see what happens.

After finishing, I got my medal (a sweet, heavy medal), met my dad at the end of the finishing chute and then we went and grabbed the special Northwestern sunglasses (every runner got a pair of sunglasses for the school they were representing). 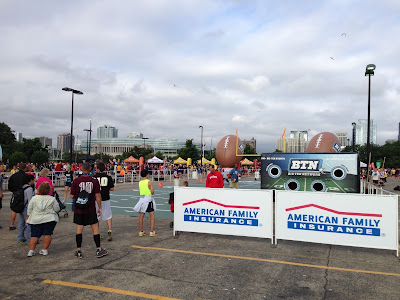 There was a pretty huge crowd of people at the tailgate party after the race and lots of beer and breakfast. I didn't wait in the breakfast line there but it seemed to be moving pretty quickly. There was a place where you could test your field-goal kicking skills and another where you could do a timed sprint. And then there were probably about 15,000 people partying. Most of them looked to be current students or recent alumni, which gave the race a definite college vibe (on top of the fact that it's obviously a college-themed race to begin with). The race is well-organized but the tailgate party is the clear highlight of this race. I think it would be even more fun if you actually graduated from a Big Ten school since you'd see other people wearing your colors.

I waited in line for my beer before we headed back to the VIP tent for breakfast and then changed clothes after stretching since I was soaked from the slip 'n slide.

My dad and I hung out with other members of the media team before taking off to go to Home Depot and try to get some work done. The good thing about a race that starts at 7am is that you still have the whole day ahead of you after you finish. I think we were out of there by 9. A lot of people were still partying then (a lot of 5K runners hadn't finished yet) and I bet the partiers stayed there for a while. 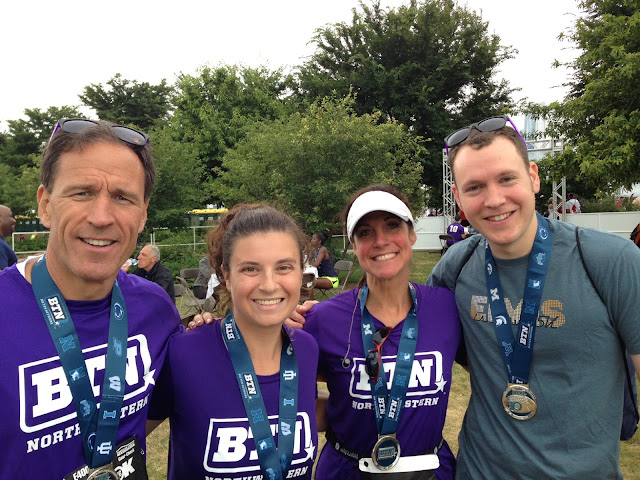 I definitely recommend this race and I'll be back next year (and looking for the slip 'n slide)!