Chinatown 5K and running with a first-time 5Ker 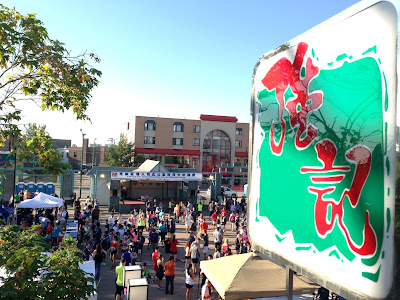 Last year I really enjoyed the Chinatown 5K (and even called it the Best Neighborhood 5K in Newcity's "Best of" issue), so I was excited to run it again this year. Race directors made it especially enticing when they offered the race for only $17 on Groupon, which is a steal for a 5K these days.

Because of the Red Line being down south of Roosevelt, I was worried it would take me longer than usual to get to Chinatown... which translated to me getting to Chinatown an hour before the race started - I don't know how quick it is to get farther south than Chinatown but the buses running between Roosevelt and Chinatown Square were super fast and convenient.

Before the race, they gathered all the runners into the square and then put on the sweet Lion Dance that they did last year. I have no idea what it's about but it definitely looks (and sounds) really cool: 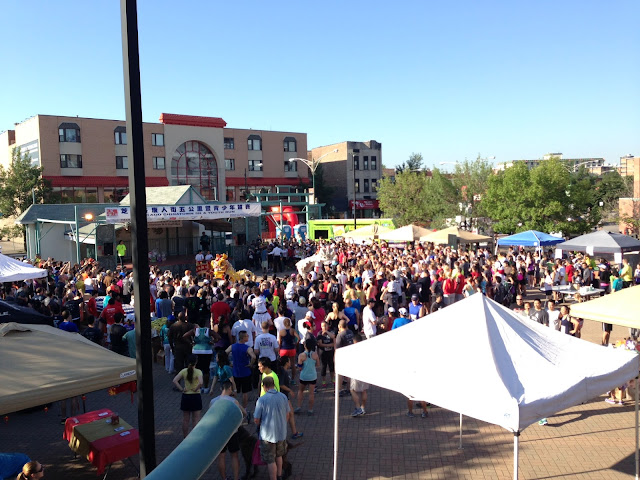 The race followed basically the same course as last year, passing under the Chinatown arches on Wentworth, which is one of my favorite intros to a race course in Chicago.
The race goes down (and then back up) Wentworth, going as far south as 34th street before retracing its steps. Usually I'm not a big fan of out-and-back courses, but this one doesn't bother me that much. I think it has to do with the streets being wide and blocked off (though there was some construction around 31st or so that caused some congestion where the course passed back by itself. Still, it's an area I don't visit that frequently, which makes running it all the more fun.

Just after finishing the first mile, a runner came up beside me and enthused, "Man I feel great! THIS is GREAT!" The thing is, I don't usually talk to other runners during a race. I think this is mainly because, until I got injured, I was always so concerned about running as fast as I could every single race that I didn't really take the time to talk to runners around me. But this guy (Victor) was so gregarious it was kind of impossible not to talk to him.

We ran together for the rest of the race and talked about running and training, but mainly just kept each other from slowing down or getting bored. It turned out this was his first 5K and his stepson had encouraged him to run it and gotten him signed up. I always enjoy running, but his first-timer's enthusiasm made the concept of a race itself seem more exciting than it has in a while. Also, he would yell back at any spectator that cheered us on, which is something I've always loved as a spectator but typically forget to do as a runner. In short, he motivated me to enjoy running more than I already do and reminded me what a cool sport running is - the fact that a first-time runner could be on the same course as a runner who's running sub-6 minute miles (which the winners of this race were). Even though this was his first race, he kicked it in at the very end and I couldn't keep up with him. We crossed the finish line a few seconds apart (him in front of me), but when we printed out our unofficial times after the race it turns out that he had started a little behind me in the pack and finished almost 45 seconds faster than me (I finished with a 29:43 and he was just under 29 minutes). He was talking about considering other races in the future (and maybe even a 10K) and I have a feeling he's going to be tackling longer distances pretty soon. I definitely hope to see him at future races!

Finally, in line with this being the Chinatown 5K, the food at the finish line included bananas, apples... and fortune cookies. Mine said "You will be showered with good luck." So, I'm really looking forward to that... especially over the next three days (when I'll be running three more races). 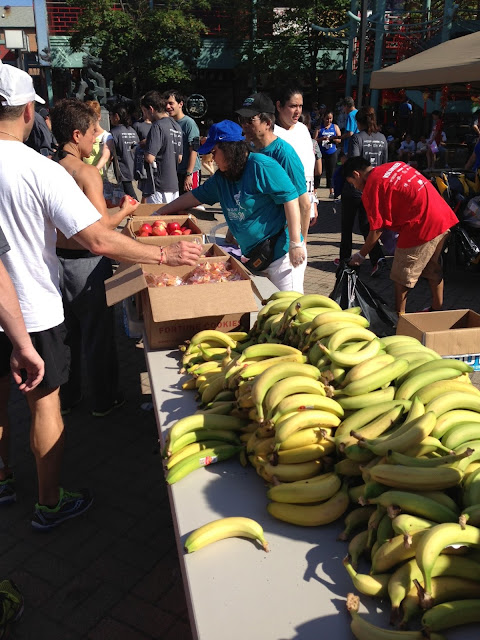 April 01, 2018
April 1: Character Assassination presents The Roast of Disney Princesses at Laugh Factory The latest entry in the Character Assassination roast show series pits a collection of Disney princesses -played by Chicago comics - against each other. Starring Allison Dunne, Alex Kumin, Sarah Shockey, Gena Gephart, Audrey Jonas, Eunji Kim, Samantha Berkman, Stephanie Weber and Mandee McKelvey. April 2: Comedy Overload Open Mic at Gallery Cabaret A weekly open mic open to all forms of comedy that takes place at a sweet venue in Bucktown. April 3: Shake 'Em Up Comedy Showcase at Shakers on Clark   This free two-hour comedy showcase is hosted by Darrick J and Nate Galloway. Comics get between four and 10 minutes each and the hosts let comedians know a bit needs work by hitting a bell and "shaking 'em up." April 4: Comedians You Should Know at Timothy O'Toole's Really you should be catching this weekly showcase at Timothy O'Toole's e
184 comments
Read more