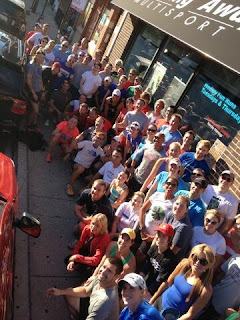 Last year I got to be part of a Q&A with Krissy Moehl at Patagonia in April and then run with and hear a lecture by Scott Jurek and Chris McDougall at Fleet Feet in June.

Wednesday night, I was once again reminded why I love running "celebrities" when I expanded my celebrity runner/running store connections at RAM Racing by going for a run and then being part of a Q&A with Dean Karnazes. If you don't know who he is you can find out more by reading my blog from when I became BFFs with him last year at the Chicago Rock 'n' Roll Half Marathon expo, but that was a pretty quick greet, shake, sign kind of thing and this was a whole evening.

It started out with a 3- or 5- mile run (depending on what participants wanted to do). I chose to just do three because of my IT-band issues but it seemed like most people did five, and Dean ran with the five mile group. We started at the Running Away Multisport on Clybourn and followed Webster to the lake before turning around.

Afterwards Dean was introduced and then talked about his experiences at Badwater two weeks ago (in brief: 135 miles, 131 degrees). He then took questions and gave (what I thought were) very candid answers. He came across as a really genuine guy and even a bit of a running nerd. He had a number of great quips (he's always touring and speaking so I'm sure he's built up a good repertoire over the years) but my favorite was in response to how to train for different distances he said:

"With a sprint distance... like a marathon..."
But the most honest moment of the night to me was when someone asked him how he maintains balance in his life in regards to his family and friends and he responded by saying, "Did I say there was balance?" and then went on to say that his life (as is the case with most high-achieving individuals) is defined by chaos and a lack of balance.

What I really liked about his answer here was that he first pointed out a "flaw" in his lifestyle by saying how unbalanced his life is but then kind of bragged on himself by saying that he was a high-achieving individual. Both of these things are true. And I like that he put that out there. Especially because he could have very easily just said, "Oh, I maintain an excellent balance and always find time for my family." I think that genuineness is what makes him an especially likable figure to follow. Well, that and he's been declared a Superhuman by Stan Lee.

He also talked about two pretty exciting projects on the horizon. One is his upcoming book about Pheidippides, which is his first foray into fiction and actually sounds pretty interesting. And the second is his goal (starting with the New York City Marathon next year) of running a marathon in every country in the world (204 countries) in one year. He's currently working with the UN and the state department to make this a reality and has teamed up with National Geographic to film the whole thing. Right now only around 100 countries have organized marathons, so he's working with various countries to establish marathon routes. He's even got North Korea, Iraq and Iran all on board. And his marathon in Vatican City will be on a treadmill...

At the end of the night North Face did a raffle (he's in town promoting the upcoming North Face Endurance Challenge) and everyone received a signed poster of Dean. Not bad for a free Wednesday night event. I won't be hitting up the Endurance Challenge this year, but maybe next year, once Dean and I have met up at a few more events.