5K RUN! to End Homelessness and running with another first-time 5Ker

I've lived in Chicago for six years and I've never been to Douglas Park. To be honest, I don't think I'd ever even heard of Douglas Park before I signed up for the 5K RUN! to End Homelessness. Which is actually too bad since it's a pretty nice park with little rolling hills, a pond, a swimming pool and some nice trails.

So, the first thing I learned (or, more accurately, was reminded of) this morning, is that running really introduces you to cool new places that you otherwise would not have experienced. Even in a city that you've lived in for six years.

The only issue with this location is that it's not that easy to get to from Lincoln Square early on a Sunday morning. Buses and trains run very infrequently at this time and it took me more than an hour to get there (afterwards I found the 49 Western bus took me almost straight home from the park with no problems... I obviously should have used that to get there in the morning as well... but that's what I get for trying to plan something at six in the morning).

Race day packet pick-up was no problem (even though I arrived at 7:50, only ten minutes before start time). The shirt is a pretty straightforward white racing shirt with the race logo on it and the goody bag also included a nice gear check bag and a water bottle with the logo of the event beneficiary, A Safe Haven, on it. Gear check was also simple and I was at the starting line at 8:00, after a brief intro by the race coordinator.

This is when they announced that there were cash prizes for the first five male and female finishers. And these are some serious cash prizes. I won't go into all the specifics but prizes ranged from $3000 to the first male and female down to $250 to the fifth male and female... Aside from marathons, I don't know that I've ever been a part of a race giving away that much prize money. I'm really looking forward to seeing the results just to see what you have to run to get $250 around these parts.

Anyway, I'd say there were around 500 runners. The only person I knew there was John Garcia, and he was a little busy emceeing the race beforehand, though I did get to talk to him afterwards. Luckily, Declan let me know that Adam was going to be running this race, so when I spotted him in front of me about a mile in (we later discussed how a bald, bearded man is relatively easy to spot in a crowd) I caught up to him and we ran the rest of the race together. And as it turns out, this was his first 5K. After running and chatting with first-time 5Ker Victor yesterday during the Chinatown 5K, it was exciting to get to run with another first-time 5Ker today.

The course was a little awkwardly designed (two roundabout loops that followed trails, sidewalks and streets and got a little narrow at times) but it was still a well-coordinated run, with plenty of volunteers directing runners and lots of interesting scenery.
The finish line was a quick righthand turn at the end of the second lap of the course (yes it was a double-lap course, which means there was lots of lapping going on since there were a lot of runners... less than ideal but it worked out since the field was relatively small). 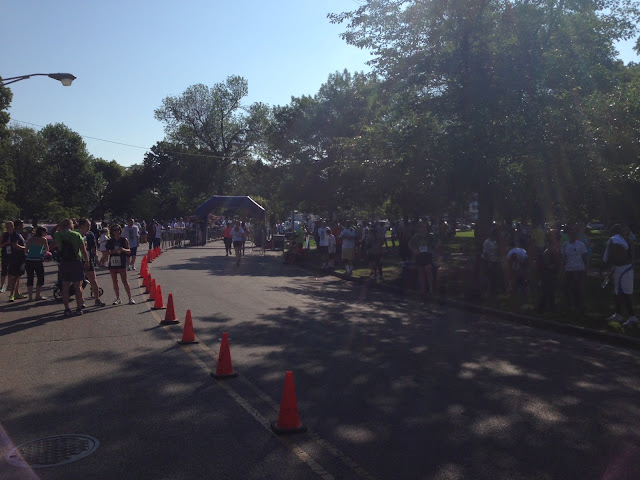 Adam was going for a sub-27 minute finish and I was just trying not to injure myself. He definitely succeeded (looks like he got a 26:32) and my knee is feeling okay so far so hopefully I did too.

As with Victor yesterday, I have a feeling that, after this race, Adam is hooked on running too.

Oh, and we got medal's for finishing. I was wearing mine when I got on the bus to go home and the bus driver asked me if I won the race. Obviously, I said I did. When you've run enough races, you know that the answer to the classic "Did you win?" question that people feel the need to ask runners is always "YES!"

And yes, I recommend the 5K RUN! to end Homelessness. Especially if you're capable of getting fifth place in a road race - if that's the case, registering for this 5K is a chance to cash in on your speedy legs.