Advertising with Flyers to High Runners

March 20, 2012
At the finish line of the St. Paddy's Day 8K on Sunday there was no shortage of people handing out flyers for future races. I've almost always found the Mitch Hedberg joke about flyers to be absolutely true: "When someone tries to hand me out a flyer, it’s kinda like they’re saying, 'Here—you throw this away'" but this old-school form of advertising actually worked on me this weekend... 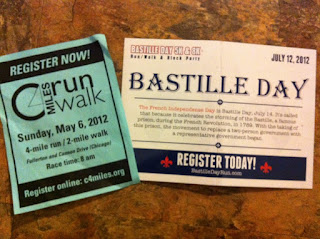 ...possibly because I was high from just finishing an 8K and two of the races (namely C4Miles and Bastille Day 8K) will be taking place in the exact same place as the race I had just finished (in front of the Peggy Notebaert Nature Museum).

So now I'm registered for the C4Miles and thinking about the Bastille Day 8K as well. Not sure what's up with the Bastille Day 8K site, though: it looks like they might have launched their old-school flyer campaign before getting their new-school website up and running properly.

But I guess the thing I realized is that sometimes a flyer does work, especially when you're handing it to someone who just had an awesome experience and you're promising them a similar one in a month or so.

Anyone else planning to run either of these races?