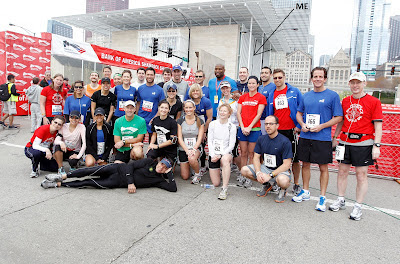 I'm usually one of the taller people in a group picture, but when the guy right next to you is Israel Idonije you tend to look pretty small. Also, I'll be totally honest: since the only sport I really know anything about is running, I had no idea who he was until someone told me! But he's a super-friendly guy and seemed genuinely happy to be there - and it was interesting to see the contrast between professional athletes: he definitely has a totally different body type than the elite runners!

Also, as I mentioned on Friday, the run we did at the expo did end up on ABC7's 6 o'clock news. You can see me around the one minute mark getting ready to pass Abdi... he managed to fend me off somehow.

Oh, and apropos of nothing, I meant to mention this yesterday, but during the race I noticed some great signs when turning the corner at Grand and State. Today, I saw them posted on luluemon's Facebook page and realized that it was people from lululemon holding up the signs. Really great stuff! (My favorite is "RUN total stranger, RUN!") Did anyone else notice these during the run?

I have to admit that I'm a sucker for good motivational signs during a race, though you tend to only see them during half marathons or farther. Seeing signs like that during an 8K definitely made the experience even better.

Finally, to close out the Shamrock Shuffle-ness this year, here's a picture I took right after crossing the finish line: 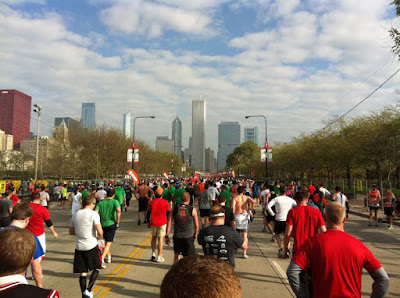 While the city definitely looked good from the starting line, it looked even better from the finish!