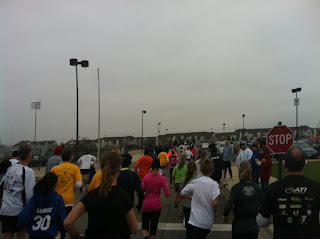 So with a few hitches in our travel plans (attempting a pick up at the corner of Chicago and Michigan at 6:45 in the morning was a little more difficult than I anticipated) my professional running team (I don't use the term loosely at all) hit the road to Plainfield for the inaugural Fast Cat.

And we managed to expertly miss the Plainfield exit the first time around, make a few turnarounds (again, we're professionals), and get to the Plainfield North High School race grounds with about half an hour to spare for the 8:30 starting time.

Parking was no problem (as Chicagoans that's an important thing to note) and picking up our packets was also easy (luckily). The starting line was a spray-painted mark in the school parking lot that we stumbled upon by accident when we noticed a lot of people were congregating around a certain area. Logan and I got into the starting pack while Bill waited on the sideline (he ran the 2nd leg of the 10K relay).

Overall, a really nice course and a quick, fast run. Check out my full review at Newcity.com!

Anyway, back to my time. I was destroyed by 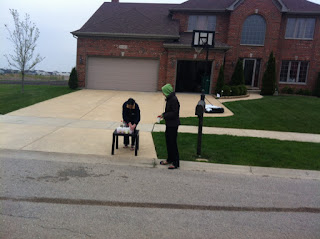 two non-runner athletes, reminding me that running is a really sweet sport because anyone can do it, and people who are athletic in other areas probably don't even realize how well they would do it at it. So it was really exciting to introduce two people to the joys of running, even at the expense of my ego.

Also, I made a new nemesis: Michael Winchester.

I actually have no idea who he is except that he flew past me at the very end of the race and ended up taking 2nd place in our age group... by 8 seconds. For real. 8 seconds. In almost 48 minutes of running. Let this be a lesson to everyone: if someone starts to pass you in the last quarter mile of the race... DON'T LET THEM! You don't have to trip them or anything, but you should definitely speed up and make a go of it instead of just letting them get by you and then finding out that they out-placed you in your age group... by 8 seconds! I'm on the lookout for you now Winchester. Be ready.

It was a very suburban course, and one family even set up a mini water/Gatorade station in their driveway (see picture above), which I thought was such a perfectly suburban thing to do. Thanks unknown race spectator - totally awesome of you.

Here's us looking super-excited in the entryway of the high school afterwards...
and by us I mean me: 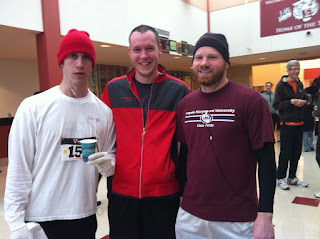